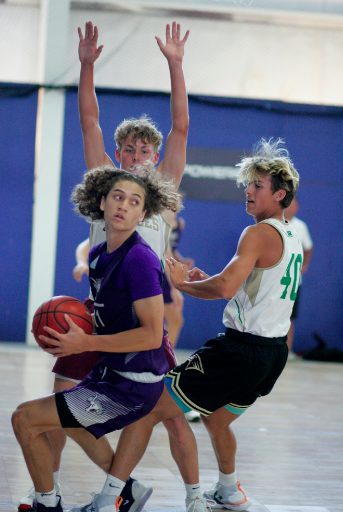 In the first game, the Pioneers topped Brighton 53-45, led by the hot shooting of Noa Gonsalves with 23 points. Tyson Hawkins added 13 points and the team overall netted a blistering 65 percent from 2-point range.

Gonsalves was the man of the hour in the second Monday game as well, when the last of his four treys swished the net at the buzzer to lift Lehi over Weber 56-53. He shot better than 70 percent for the contest and finished with 28 points.

In the first Tuesday game, the Pioneers triumphed 39-37 over a determined Maple Mountain squad in a defensive struggle. Tyson Hawkins led the way with 17 points and Braxton Hawkins pitched in nine.

Double-teamed throughout the game and held to four points, Gonsalves still provided five assists, four rebounds and a pair of steals. Brousseau contributed five rebounds and two steals as well.

Lehi’s players somehow found another gear for the final outing of the series. The Pioneers completed 71 percent inside the circle, 54 percent beyond the arc and 87 percent at the free-throw line to beat Herriman 71-58.

“We were missing a couple of important varsity guys, but the other players were able to step up and handle some adversity,” said Lehi head coach Quincy Lewis. “The teams we faced come from four solid programs, so these were quality wins.”

Lewis expressed satisfaction that his squad was finally able to get at least some live-ball experience during this summer of unprecedented circumstances. “I feel really good about what the varsity group has been able to accomplish in these eight weeks,” he concluded.

The JV went 1-3 in four close games at this event.