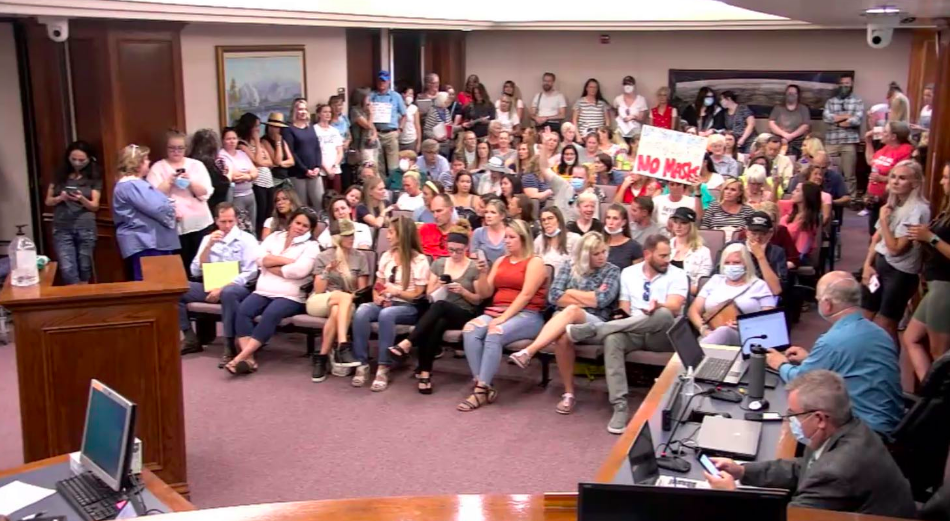 The Utah County Commission was set to discuss and vote on an agenda item Wednesday, asking for a “compassionate exemption” to Gov. Gary Herbert’s K-12 mask mandate for Utah County schools.

The mask-focused agenda item brought forth by Commissioner Bill Lee was controversial from the start, after Commissioner Tanner Ainge made a public statement against the agenda item and expressed frustration with Lee on Tuesday.

Lee also held an “anti-mask” rally and spoke to supporters before the Commission meeting.

The heated agenda item ultimately derailed Wednesday’s meeting after a packed room of citizens caused Ainge to suspend the meeting as the crowd reacted with shouting and boos.

Ainge entered the max capacity chambers and made a brief statement before walking out of the meeting.

“This is going to be brief; I think. This is the exact opposite of what we need to be doing. We are supposed to be physically distancing and wearing masks. This room is not complying with health guidelines and this creates a health concern. I’m going to suspend the rules and motion to continue this entire meeting at another date,” said Ainge.

Commissioner Nathan Ivie made a second to the motion.

Lee then asked, “Can we have a discussion?”

A rescheduled date was not decided or announced at the conclusion of the meeting.