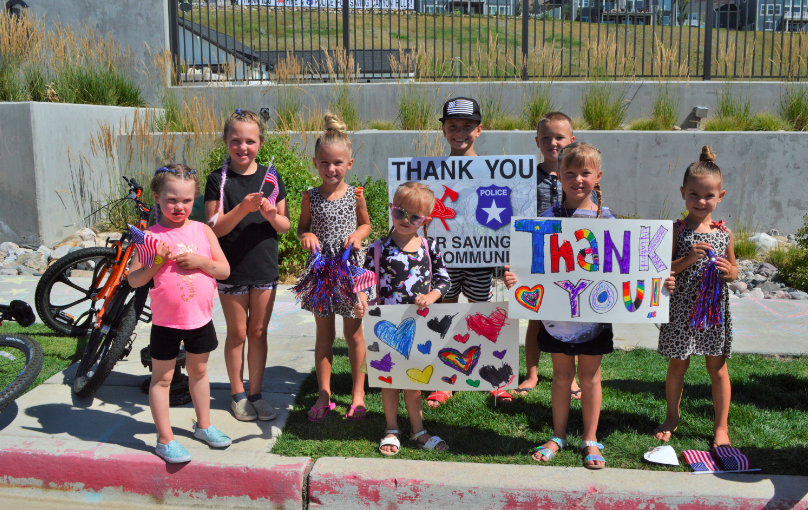 Twelve days after their homes were threatened by 20-foot flames barreling down Traverse Mountain, residents of the Canyon Hills neighborhood lined the sidewalks to cheer for the firefighters and police officers who worked so hard to save their homes on that late June night.

“This is definitely an emotional experience to see these fire trucks come up the road,” said Brandon Robins, a member of the Canyon Hills Homeowners Association Board who spearheaded the event to honor the police and firefighters. “My neighbor knocked on my door in the middle of the night and we were out of there 15 minutes later. It was amazing to see the firefighters and police officers driving in as we were driving out. I can’t express my gratitude enough. I know there are strong emotions in our community – we’re united in our gratitude for you,” Robins said to the members of the Lehi Fire Department, Lehi Police Department, and the Lone Peak firefighters who attended the parade and ceremony at Canyon Hills Park.

Children wearing plastic firefighter hats and holding homemade signs saying “thank you” waved and clapped as the Lehi Fire Department and Lone Peak Fire Department engines made their way to the park, the same road they traveled almost two weeks ago in the middle of the night with a much different mission. “We had just come off a brush fire, so we were ready with the right equipment. It was difficult to see where the fire was in the middle of the night, hard to know what kind of access we had to it. Our number one priority was to get everyone out and protect the homes,” remembered firefighter B. Smith from Station 82. Smith was in one of the first trucks to arrive on the scene. “Traverse Mountain is one of the places in Lehi the fire department is always concerned about. We’ve been training for exactly this scenario for years. It’s been a top priority for Chief Craft and Chief Robinson,” Smith continued.

Tyson and Hailey Henderson had been in their new home in Traverse Mountain for a week and a half when the fire started. “We ran around grabbing the essentials and realized that the only thing that matters is our kids and our memories.” The Hendersons grabbed computers and essential documents, backed away from their new house and drove to safety. “It was strange to drive away from our home and think we could possibly come back to nothing,” Tyson remembered. The Hendersons were back in their house less than 24 hours later and to their relief, nothing was damaged.

At the Canyon Hills Park celebration, three families briefly told their experiences with evacuating their homes and getting to safety on June 27. “I have a four-year-old boy who has always admired first responders – to him they’re better than any Marvel character. Everything happened so fast that night, I know all of us have similar memories that will stay with us for the rest of our lives. These firefighters told us to get our kids and get to safety while they stayed and protected our homes. We are so grateful. We admire you. We honor you. It’s incredible for my children to see what true heroes look like,” said Tiffany Barker. Barker’s four-year-old son dressed in a police SWAT team costume for the parade and celebration and the Barker children greeted and thanked each of the firefighters who attended.

“Save for you and some luck, we’d be in the same situation as Paradise, California. From the bottom of our hearts, we owe you. You have our loyalty, our praise, and our love,” added Dr. Williams. The fire came within 50 feet of Williams’s lot. “Like an idiot, I took out my garden hose and tried to put out 20-foot flames myself,” Williams said with a chuckle. When he and his wife tried to exit the neighborhood, they found the way partially blocked by spectators. “Were it not for the police working beautifully with residents and lookie-loos, we would never have gotten out,” said Williams.

“It is truly an honor and privilege to serve you. Thanks to Mayor Johnson and the City Council for supporting our department so we can have what we need and provide training for what we did that night,” said Lehi Fire Chief Jeremy Craft. The Canyon Hills residents presented the Lehi Fire Department and the Lehi Police Department with gift baskets that included hundreds of handwritten thank you notes as well as $4,000 from a fundraiser in the neighborhood.

“This is a positive vibe. There are so many negative things going on right now. These guys need to know that there are people out there that respect and honor the jobs they do and the risks they take, because they are significant. This is an awesome celebration – this is what Lehi is all about,” said Mayor Mark Johnson.