Lehi artist’s garden a refuge from the outside world 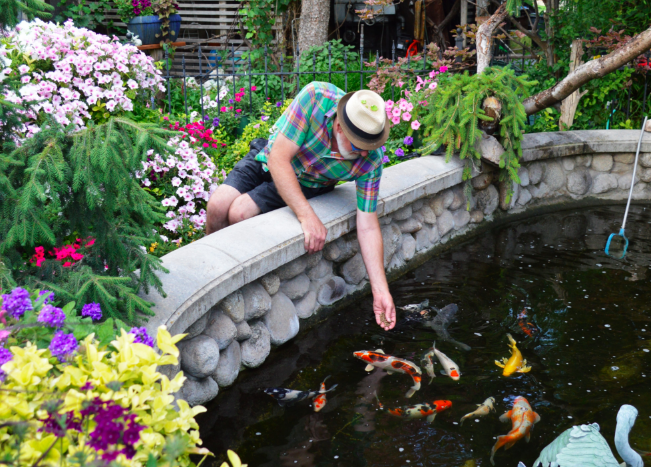 For more than 40 years, artist Randy Blackburn has created landscapes, murals, theater sets, and even jewelry. He chose the plants at Ashton Gardens at Thanksgiving Point, painted murals and designed gardens at the Polynesian Cultural Center in Hawaii, and constructed intricate stage sets for Lehi High School shows that rival Broadway productions. Some of Blackburn’s most beautiful and timeless work, though, is in his own garden on one acre in a small Lehi neighborhood.

Randy and his wife, Nancy, moved into a brand-new house in Lehi in 1975 soon after they got married. Randy planted trees in the front and backyard right away. “Always start with trees, then shrubs around the edges for privacy, then fill in with plants,” he advised. “If you can’t afford anything else, get your trees in.” One of Blackburn’s signatures is the grand scale of his work, and the small yard wasn’t enough for what he really wanted to do. Twenty years ago, Blackburn purchased the lot behind his home, bringing the plot to one acre and giving him a worthy canvas.

“I planted trees around the edges and meadow grass the first year, and each year I would take out a 15-foot strip of grass and put in what I wanted,” Blackburn recalled. Every square foot of the garden feels like it just happened naturally, but it is the result of thoughtful and strategic planning. A koi pond and fountain near the house looks like it has been there for 100 years, but Randy designed and engineered it himself – making it cat- and raccoon-proof. He knows how each leaf and flower will look and smell, not only in different seasons, but at different times of day. Blackburn especially delights in nurturing plants that aren’t supposed to grow in Utah. He has a lemon-scented magnolia bush in full bloom near his driveway and the blue form of a Giant Redwood tree that he brought back to his garden in a four-inch pot.

Randy and his friend, Larry Sagers, a long-time Temple Square landscape designer, have traveled twice a year to see gardens all over the country and get ideas for themselves as well as clients. Blackburn has been quarantined since he returned home from taking the Lehi High School drama students to a regional competition early in March. “I have terrible lungs – I just can’t take any chances,” he said of the danger of getting coronavirus. Blackburn’s daughter, an agriculture teacher at Timpanogos High School, has brought him leftover flowers from their annual sale and Sagers keeps the annuals coming as well so Randy doesn’t have to go shopping himself. “I’ve never had orange in my garden until this year,” he said as he walked by a spectacular orange lily, one of the purchases from his daughter. Blackburn prefers cool blues, light pink, and especially white. “I like colors that stand out against the green. In fading light, dark flowers just look like blobs to me,” he explained.

The one-acre garden is accented with unique little sculptures and unexpected tableaus, like fairies made of bonsai wire and an antique laundry basket full of ostrich eggs, treasures from his days working in the Thanksgiving Point gardens. “My daughter would distract the ostrich and I would grab an egg and run as fast as I could,” Blackburn remembered.

Although Randy Blackburn describes having March and April to work in the garden “a gift,” he missed doing the spring show at Lehi High School and he especially misses having the high school kids come to his garden for parties. “I just need people,” he said. He reaches out to a few students and allows the occasional single visitor, but the Blackburns are mostly home alone with their animals and plants. “Aren’t you a sneaky Pete! I know where you’re going,” Blackburn says to a chicken who has escaped a pen and is strutting down the garden path. Randy carefully lifts the gate for the chicken, who has come to visit a different coop. “I love my birds,” he says.

In all of Randy Blackburn’s art there is love. His careful observation of plants, animals, and humans is the genius in all of his creations. “Throughout his career, Randy has had doors close in his face, but then another door opens and it’s an even better opportunity and experience than the one before,” said Nancy Blackburn.

Arts in the Park starts Sunday