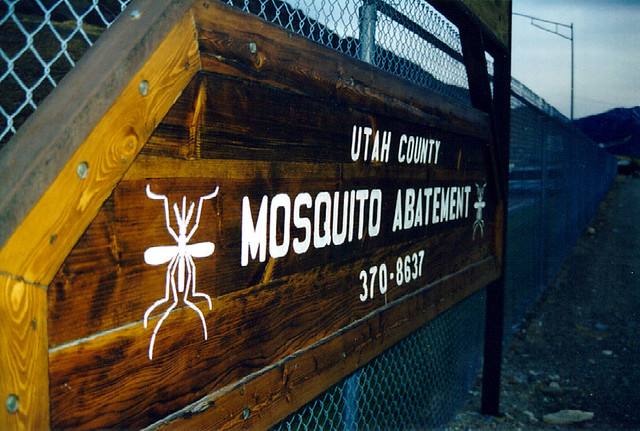 A wet spring and a fuller Utah Lake will likely lead to higher mosquito populations this summer.

“We have a very full lake and, consequently, that floods back and creates new habitat,” said Dan Miller, mosquito abatement director for the Utah County Health Department. “Especially as it drops, that will create little pockets.”

Those pockets then become breeding sites for more mosquitoes.

The Utah County Health Department Mosquito Abatement District began spraying for mosquitoes in early June after surveillance trapping in late May showed there were areas throughout the county that exceeded the threshold for spraying.

“We spray when the numbers justify it,” Miller said.

If culex mosquitoes are found in all traps, then the department will begin spraying by airplane.

Miller said the amount of mosquitoes found in traps are about normal for this time of year, with early spring flood water bringing in mosquitoes. The amount of culex mosquitoes is also on the rise.

The mosquito abatement district has released an online map this year tracking which areas in the county will be sprayed for mosquitoes each night. The map was created after the state passed a law stating the public needs to be notified daily of when health departments will spray for mosquitoes. The requirement goes into effect next year.

Continued development along Utah Lake has led to additional complaints about mosquitoes.

“Mosquitoes were always there, but we didn’t have any people living there,” Miller said.

He said he’s seen those trends as people move into land in Saratoga Springs and southern Lehi that has traditionally been mosquito habitat.

“Consequently, people are interacting more with mosquitoes, so they are making phone calls,” Miller said.

The number of mosquitoes in Utah County is dependent on Utah Lake’s level. Miller said 2011 was the worst mosquito area the health department has seen, with 2019 as the second-worst.

Mosquitoes can breed in pools of shallow water, like in buckets and tires. Yard fountains that have been turned off also make prime breeding grounds.

Miller said if the department hears complaints about a neighborhood having mosquito issues, they’ll often investigate and find bodies of water like a swimming pool that can breed several hundred or thousands of mosquitoes.

Utah County saw one West Nile virus diagnosis in 2018, with a five-year average of 2.2 people diagnosed a year, according to the Utah County Health Department’s 2018 annual report.

There is no evidence to suggest that COVID-19 can be transmitted by mosquito bites, according to the World Health Organization.

Information on mosquito surveillance, which areas will be treated and how to request abatement services is available at http://health.utahcounty.gov/mosquito-abatement. For assistance call 801-851-8637.