Street renamed for Lehi Primary Children's Hospital, but not without City Council tension 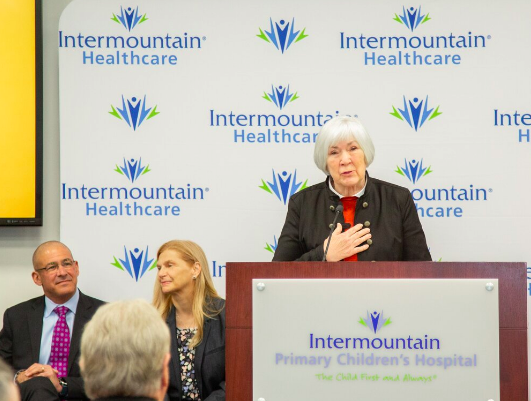 Lehi City Council met virtually on June 9 for the first council meeting of the month. The agenda included mostly logistical items, but the meeting hit turbulence when it came to a street name change for Lehi’s future Primary Children’s Hospital campus.

Dan Kohler, Director of Facility Planning for Intermountain Healthcare (IHC) requested that the street in front of the future Primary Children’s Hospital, currently named Holbrook Way, be changed to Miller Campus Drive on the southern portion of the road.

“This is to recognize Gail Miller and her entire family. Their donation has made the construction of Primary Children’s Hospital in Lehi become a reality,” said Kohler when presenting the request to the council.

Gail Miller, CEO of the Larry H. Miller Company and Utah’s wealthiest resident, donated $50 million toward the construction of Lehi’s future hospital. The donation represents the largest single gift the Miller family has given to any organization. The 38-acre Lehi medical campus will include a five-story building with 66 beds, along with a three-story office building. The two buildings will be a combined 468,000 square feet and are scheduled to open in 2023.

The name change received positive feedback from the Council including Councilman Paul Hancock. “It’s a pretty special thing for us to have a Primary Children’s in Lehi. This is an area that hasn’t been developed and we aren’t asking for anyone to change their address or anything. I think it’s totally appropriate,” said Hancock.

Tension arose after Councilwoman Katie Koivisto made a motion to approve the name change with the condition that IHC reach out and notify all residents of Holbrook Farms, which neighbors the hospital site.

Kohler, as the IHC representative, pushed back slightly at the requirement to notify nearby residents with any kind of timeline due to the possibility of interfering with the IHC Communication Department’s press release schedule. Although Kohler didn’t want the condition attached to the motion, he reassured Koivisto that the organization would be willing to comply and ensure residents were informed.

Councilman Chris Condie asked if Koivisto would be willing to amend her motion, “I feel like the word ‘condition’ is a little misleading and strong, could we change the word to ‘recommend’?” said Condie.

Councilwoman Paige Albrecht then offered mediation, “Katie, is this something you think you can just go on your neighborhood Facebook page and post?” said Albrecht.

“I feel like it should come from them,” said Koivisto.

Hancock then asked the Mayor to call for a second on Koivisto’s motion and expressed his feelings about the situation, “I just don’t see the point. It’s a name change on a road. Nobody lives on it and nobody is impacted as far as changing their address. I absolutely want to have this road [name] change. To do this to Primary Children’s and Gail Miller just doesn’t make any sense to me,” said Hancock.

Koivisto’s motioned failed to receive a second by any other Council member resulting in the motion failing. A frustrated Koivisto pushed away from her computer and exclaimed, “This is just ridiculous!”

Hancock then motioned to approve the street name change without conditions, resulting in unanimous approval from the Council.

Lehi Gets a Farmers’ Market