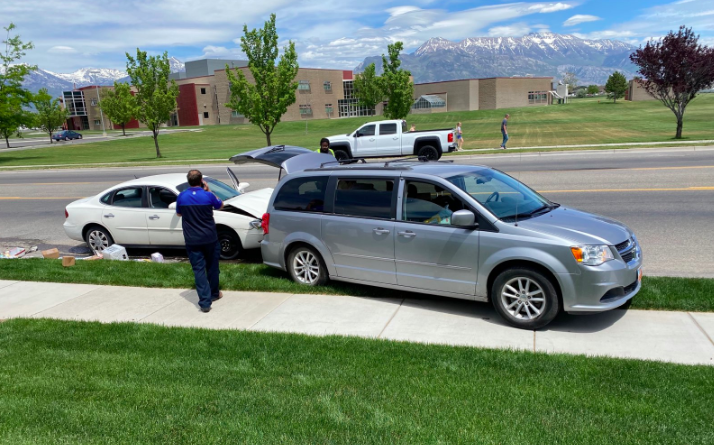 Mail carrier Warren Henrie was delivering mail to a neighborhood box on 2300 West across the street from Willowcreek Middle School around 2 p.m. on Tuesday, May 26, when Steven Shane Smith, 38, drove down the street going south. Smith hit Henrie with his car and kept driving until Henrie was pinned under Smith’s vehicle and Henrie’s van was pushed up on the sidewalk.

“My husband and I were the first ones on the scene. We saw the impaired driver get out and gather stuff from the backseat of his car and sneak it between the two fences,” said a nearby neighbor. “The driver came back and just waited for the police. He never came over to see if Warren was OK. He didn’t even call 911. It was really disturbing.” The neighbor and her husband stayed with Henrie until an ambulance came, shading him from the sun. Henrie was able to maneuver out from under Smith’s vehicle, but both legs were broken, and his lower left leg was crushed.

Smith was arrested for DUI immediately after the accident. He has since been released to his spouse with several other pending charges. Warren Henrie’s sister-in-law Connie Atkisson reports that Warren has had three surgeries so far, having spent more than 14 hours on the operating table. He has been given 58 units of blood, which doctors told his family is the equivalent of replacing the body’s entire supply six times. “This is Steven Smith’s second offense. He got to go home before he had even come down from his high. If the laws were stiffer, it would be more of a deterrent to people,” said Connie Atkisson.

“I’ve seen complaints about the placement of the mailbox and how the Post Office should take responsibility, but they don’t choose where mailboxes go, and they aren’t allowed to make a statement. The truth is that the situation was fine until Steven Smith chose to drive while he was high and ran over Warren,” Atkisson continued.

“By the time we got to the accident the cars had been pulled apart and he was laying on the ground,” said Sergeant Layne Larsen of Lehi Police Department. “The poor guy will have a lot of trials ahead of him with healing.”

The U.S. Postal Service turned the mailboxes to face the sidewalk instead of the street the day after the accident. Henrie has expressed his gratitude for the outpouring of love from the community and for the first responders who helped him.