Miss Lehi to reign for a second year 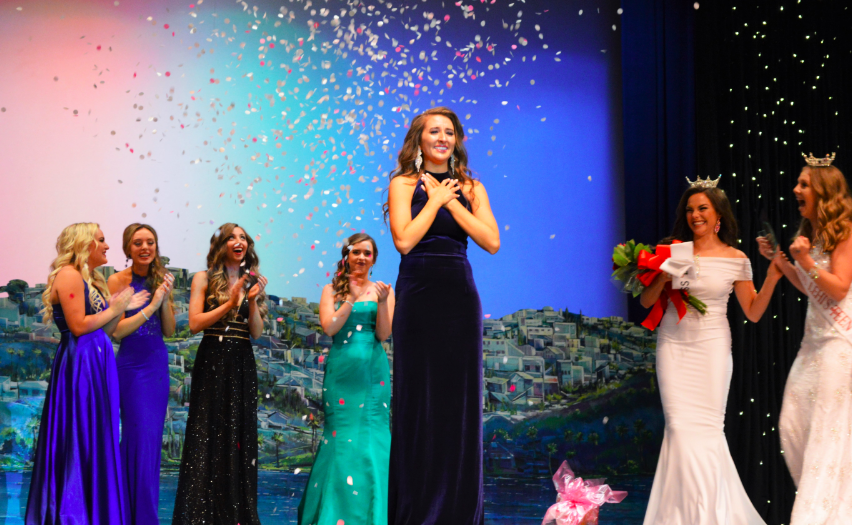 For the first time in its 99-year history, the Miss America Scholarship Competition has been postponed for a year because of the COVID-19 pandemic. The Miss Utah Committee followed the lead of the national competition and moved the state competition to May 2021, a decision that came after candidates for Miss Utah were deep into preparations for the pageant that was previously postponed to August 2020. The Miss Lehi Scholarship Competition, traditionally held the Saturday before Lehi’s Round-Up Week in late June, has been canceled for 2020 and 19-year-old Lindsey Larsen will serve as Miss Lehi for another year and compete for the title of Miss Utah in May 2021.

“I was so ready for Miss Utah,” Larsen said. “I had a tutu specially made and I bought a couple of dress options and I was practicing for interviews. It’s OK, though, a year is plenty of time to be even more ready.” Besides the costume for her ballet performance, Larsen had an evening gown, interview outfit, an evening gown for preliminary competition nights, and arrival dresses for meetings with the board and media events. Miss Utah Scholarship Competition candidates found out on May 15 that the pageant scheduled for August was postponed until May next year.

Larsen not only won the Miss Lehi crown in 2019, she also won the Director’s Award, the Spirit of Miss Lehi Award (Miss Congeniality), and the Talent Award for her classical ballet en pointe routine. Larsen just finished her first year at the University of Utah, where she is majoring in fine arts and dancing in the university’s esteemed ballet program. She taught weekly dance classes for special needs students at Skyridge and Lehi High schools until the schools were closed in mid-March. Lindsey’s Social Impact Initiative, one of the requirements for each candidate in the Miss America organization, is “Move to Change: Uniting Dance Education and Service.” Since the COVID-19 pandemic has kept people quarantined, Larsen has creatively connected with kids and families with Tik-Tok dance challenges. “Dance really brings people together,” she said. “I love to watch it happen, especially with the special needs kids.

“I did Miss Lehi two years ago and got third attendant. I’ve seen so much growth in myself between then and now. I feel like I’ve transformed into the person I want to be – I’m so much better at public speaking and my confidence has grown so much. Seeing that, I know it’s just going to get better.”

The Miss Lehi Scholarship Competition is one of the highlights of Lehi Round-Up, the annual citywide celebration held the last full week of June. The new Miss Lehi is crowned the Saturday before the official week of Round-Up and she and her attendants participate in the parades, attend the rodeo, judge Lehi Idol, the chalk art contest, the pet contest, and more. Round-Up has not been officially canceled, but Kate Daly, the Miss Lehi director and Round-Up director, knows it will look a lot different in 2020 than it ever has before.

“The Miss Lehi Committee really wanted to preserve the experience for the next Miss Lehi,” Daly said. “Lindsey has had a chance to wear the crown during Round-Up week, so it won’t be as disappointing if she doesn’t get to do it again this year.” By now, preparations for Miss Lehi would be well under way with workshops, headshots, talent preview, posters, interview preparation, and selling tickets. Daly retired as director of the Miss Utah Scholarship Competition after the pageant last year and has been director of Miss Lehi for many years, as well as serving on the Round-Up Committee. “This is the first summer in 31 years that I haven’t been crazy-busy,” Daly said. “I hope I get to celebrate my birthday in July with people.”

The Miss America Scholarship Competition started in 1921 as a money-making event for an Atlantic City, N.J., businessman. Newspapers sponsored girls to compete in the pageant, which only featured girls in pretty dresses and bathing suits parading on the stage. By 1935, the pageant (taken over by a committee of women) added a talent portion to the competition and in the 1940s the Miss America Organization created a scholarship program at a time when only 76,000 women in the entire country had graduated from college. The Miss America pageant was never canceled or postponed, even during the Great Depression in the 1930s and World War II in the 1940s. Miss America contestants sold more war bonds than any other group and became a huge morale boost for America’s troops, performing with the U.S.O and visiting soldiers.

“It’s definitely disappointing for the girls who were ready to compete for Miss Lehi this year,” Daly said. “Just because we’re not having a pageant doesn’t mean they can’t get involved and help in the community, though. We hope we have the same girls try next year.”

“My favorite part of being Miss Lehi has been Round-Up Week,” Larsen said. “I would be heartbroken if our next Miss Lehi didn’t get to experience that.” She has extended her contract to be Miss Lehi, but two of her attendants are engaged to be married and won’t be joining her for a second year. Many other Miss competitions in Utah have also been postponed, but the Miss Lehi’s Outstanding Teen Competition will be on Saturday, June 20, with social distancing restrictions in place. The Miss Utah’s Outstanding Teen pageant was in March 2020, so winners of the younger competition have had a chance to compete on the state level.

Daly hopes to secure additional scholarship money for Larsen since she is serving for another year. “We’re so grateful for Lindsey,” Daly said. “She’s already so involved with Skyridge and Lehi High School students and she knows what’s going on in their world because she was there so recently. Lehi’s really lucky to have Lindsey Larsen for another year.”

After 42 years of guiding students, LHS counselor is retiring