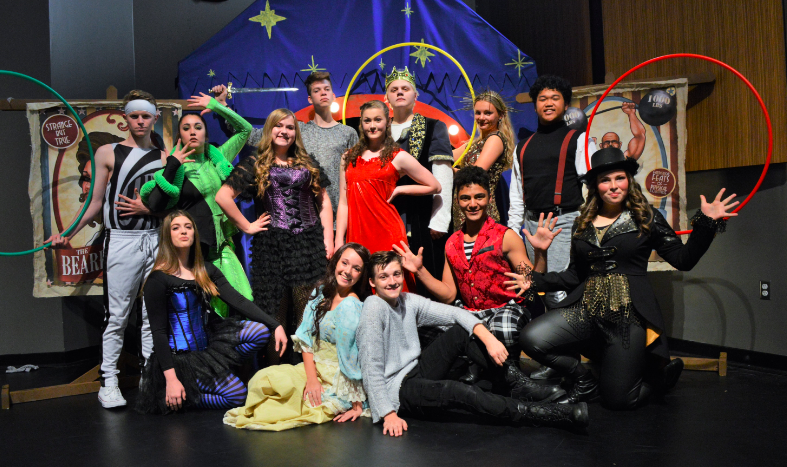 “Everyone was so excited, and I know I speak for the entire production team when I say that we are so honored every day that we get to work with these fabulous kids,” said John Brown, head of the Theatre Department at Skyridge and director of “Pippin.” “What separates a good cast from a great cast – a true ensemble of performers – is unity: unity of purpose, unity of spirit, unity of heart and mind. This cast was not only made up of great performers, but it consisted of students who truly came together to form a powerful, united force. This gave them the ability to tell an amazing story. It was an honor and a pleasure to work with them.”

The SHS cast of “Pippin” brought the story of a young prince on a quest to find fulfillment to life with powerhouse singing, circus-themed sets and costumes that literally popped off the stage, and expressive story-telling from the lead actors to the background players. Maxwell Norton, a senior at Skyridge, played the lead role of Pippin. “There are so many emotional songs in the show. Singing onstage has been life-changing for me,” said Norton.

John Brown chose the musical “Pippin” because high school students are in a place where they are trying to figure out who they are and what they want their life to be. “Theatre enables these kids to reconcile their emotions. They’re gaining empathy for people by stepping into someone else’s shoes. If nothing else happens, I want my students to leave this program having learned empathy,” said Brown.

Skyridge theatre students had to cancel their spring musical, along with every other production underway across the country, because of the coronavirus pandemic. The cast of “Pippin” celebrated their Best Ensemble win over social media with many exclamation points and virtual hugs.

Get to know Andrea Allen and Brian Voeks, candidates for Utah County Recorder

Lehi student with autism pushes to graduate on time