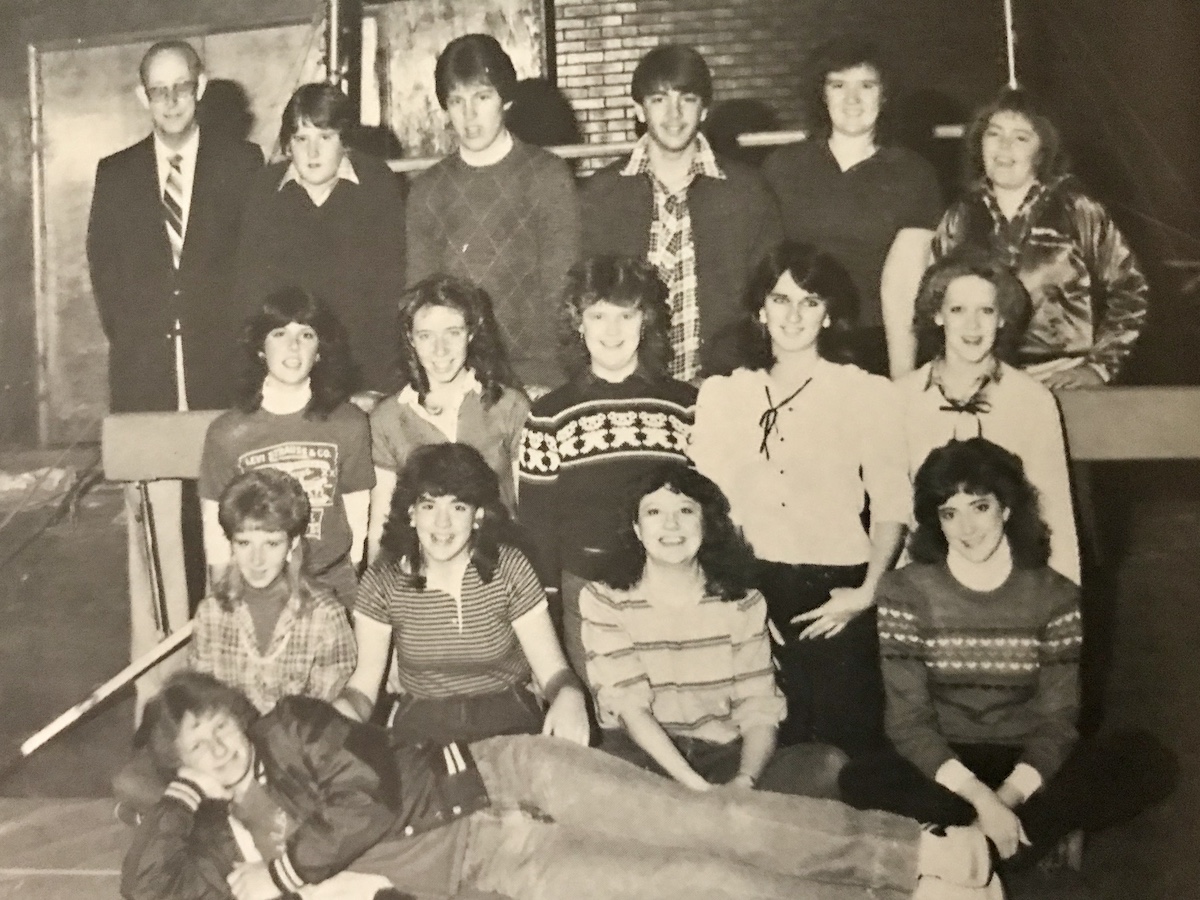 Mearle B. Smith was my Business and Type teacher in the ninth grade at Lehi High School back in the early 1960s. I remember that although he wore glasses, his sharp eyes focused upon every student in our beginning type class. Our electric typewriters were state of the art models. We did not have to reach up and hit the return arm like I did on my manual typewriter at home. There was a box of replacement ribbons on his desk for anyone at any time.

“What are we doing Mr. Smith?” queried Elaine Lott, who was sitting next to me. He laughed and said, “you can communicate with other people by using your voice, eyes, or hands,” he said, “but, the focus of this class is to learn how to use those sensitive fingers to put words and numbers into print. I want the tips of your fingers to establish a relationship with the keyboard in front of you.” I leaned down and kissed the space bar. Not really!

We quickly learned the amazing mechanical features of an electric typewriter. “Learning the basic keyboard of a typewriter will serve you all your life,” Mr. Smith continued. “Now, place your pointer finger on the left hand on the letter “f.” You will feel a small bump at the bottom of the key,” he said. “Your left pinky finger should be on the “a” he continued. “Now, with your right hand place your pointer finger on the letter “j” and feel the little bump there too. The other fingers of your right hand should be on the letters K, L and your right pinky on the colon/semicolon key.” The class complied.

He then told us to lift our hands and put them back in that same position on those same keys “fifty times.” I quit at thirty. “Now, everyone look at me,” he said as he made eye contact with all thirty students in the class, “and without moving your eyes from my face place your fingers back on the same keys ten times in a row quickly.” “Just a hint,” he said, “barely touch the space bar on the bottom row with your thumb and let it guide you to the keys above.” “Wow,” I thought, “that works!” He next taught us to look at the keyboard and type out the alphabet another thirty times, then write our name on the paper and hand it in.

I was surprised the next day when he walked by my desk and called on me by name. “You already know my name?” I whispered to myself. He must have heard me. “I knew your sister Ann,” he said, “and if you are like her, I will enjoy having you in my class,” he grinned broadly.

At the end of two weeks, we were using all functions of the keyboard, including the numbers at the top, all the control elements, punctuation keys and margin guides.

I thought the class was going to be boring. Wrong! About the third day of class, he called roll then told us to put a piece of blank paper in our typewriters. “Type this sentence,” he commanded: “The quick brown fox jumps over the lazy dog!” We all typed the quaint little sentence. “There,” he said, “you just used all the letters of the alphabet in a short sentence!” We all analyzed the words and they were there. Amazing! Every day, he would give us a few words or a sentence that was interesting, factual, and fun. “Type the word ‘stewardesses’ he requested at the beginning of class. We complied. “There you go,” he continued, “that is the longest word in the English language that you can type using only your left hand. Now type the word ‘lollipop.’ We complied again. “That is the longest word in the English language you can type using only your right hand on the keyboard.” Amazing!

The next day he told us to type the word “typewriter.” We did. He then said, “you have just typed the longest word that can be typed using only one row on the keyboard.” Amazing! He then told us that 56% of all typing is done with the left hand. Interesting! We often learned fun and quirky facts as he directed us to type brief statements to begin each class as we got our fingers warmed up. Some of them were:

……no word in the English language rhymes with month, orange, or purple.

……Winston Churchill was born in a ladies’ room during a dance.

……the words racecar, level, and kayak are spelled the same forward or backward.

……February of 1865 was the only month in recorded history to not have a full moon.

……Babies are born without kneecaps. They don’t develop until they are 2 to 6 years old.

……During your lifetime, you will wait for red lights for a total of six months.

These fun assignments we were asked to type at the beginning of each class began our learning with interesting knowledge and laughter. They set a tone of excitement and fun that made each day of class engaging. “Every person in this class will increase their grade point average in other classes by a full grade point if you turn in all assignments on beautifully type-written pages,” he announced one day. “The sad day of cursive writing may someday come to an end,” he concluded.

I ask my grandchildren to write me a letter once in a while. They send text messages, tweets, Instagram photos and messages, emails, and we even do FaceTime, but a hand-written cursive letter is a rarity. They are all keyboard wizards and “thumb tappers.” My mom was also a stickler for good writing proficiency. I truthfully tell folks that I was verbally punctuated at every meal by my dear mom, and Mr. Smith reinforced it in class every day.

When fulfilling type assignments in class, we were timed for accuracy and speed. Unlike most type teachers, who calculated proficiency with gross words per minute and then the final “correct” words per minute, Mr. Smith also included correct grammatical structure. So, if a sentence had all words spelled correctly, but a comma fault occurred, there would be a deduction to the net score. So, he helped students with sentence structure, spelling, and relied on all students to report their scores each day. He was resolute in believing we would be personally honest with our reports on each test.

He was a man of trust and integrity. I liked that, and so did my classmates. He also taught business principles in our type class. We had to learn how to set up charts, prepare a linear budget statement, account for money balances and expenditures and perform basic accounting procedures. He taught us how to use all functions of the keyboard including margin guidelines, and word spacing. He insisted we look at him and make eye contact with him when we were completing timed testing.

He once said, ”I want you to go to sleep with a keyboard on your mind.” Incredibly, many nights, I did just that. For those who became extremely proficient, he said, “you will begin to think of typing words and not just letters.” Typing skills in the class increased to the point that Lorraine Blamires, one of the brightest students in Type-1, got up to eightywords per minute. She was amazing! Pat Penrod, Alona Hansen, and Cheryl Brown were also typing wizards.

He made eye contact with me in the hallway a few days later and motioned for me to come over to him. I thought I was in trouble for talking in class that morning. He put his arm around my shoulders, leaned down (he was 6’ 4”) and said, “Bill, you are doing very well in my class, keep up the good work.” I was pretty stunned, but he made my day. I promised myself to always do my best in his class because he had told me I was ‘doing very well.’ I now realize I was probably less than mediocre, but his reverse psychology worked, and I shifted my effort into a higher gear.

Retired Lehi High School and Skyridge business and marketing teacher Becky White said, “Mearle Smith was my mentor and inspiration. I became a teacher because of his personal attention and guidance.” Indeed, many Lehi students pursued teaching careers and obtained successful business skills because of his dedication to their success both inside and out of the classroom. Mr. Smith’s son, Craig, is currently one of Utah’s premier Math teachers at Lone Peak High. Like his dad, students love him and respond to his tremendous skill as a teacher. His wife Eliese supported him in all teaching capacities and Mearle became a devout Pioneer booster.

I recall that when we played South Sevier for the State Basketball Championship in 1963, I asked him if he would cheer for Lehi, or his alma mater (he graduated from South Sevier High). “Well,” he said, “I will cheer for the winner and the loser.” But, when the championship game started, I could clearly see him in the Lehi student cheering section. His devotion to the city of Lehi, his church, his country, and his students consumed his life. He was an LDS Bishop, a patriotic veteran of the U.S. Air Force and Air National Guard (30 years) and served two missions for the church. His children and “grands” adored him, and his teaching colleagues loved him too. He was the epitome of everything a great teacher should be.