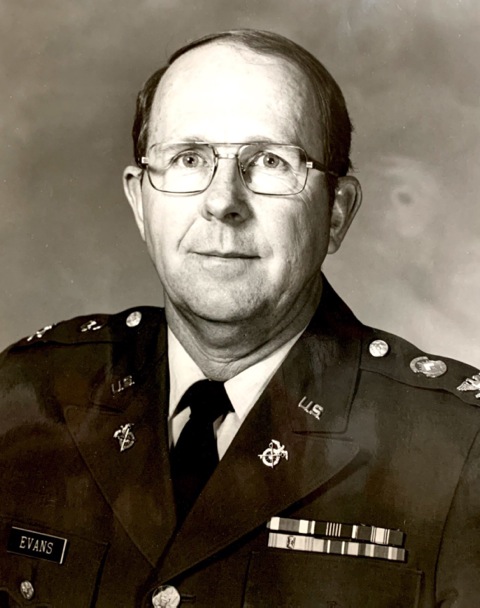 After living a long and full life serving in education, the military, and church, Gary Ferdinand Evans passed away peacefully at home on Tuesday, March 24, 2020.  Gary was born on December 13, 1934, in Lehi, Utah. He was the oldest child of William (Ferd) and Lila Evans. Gary graduated from Lehi High School in 1953, where he was on the basketball and baseball teams and in the school band.  After high school, he enrolled at Utah State University where he graduated with B.S. and M.S. degrees in physical education in 1957 and 1959. Gary received a Doctorate in Health, Physical Education, and Recreation from the University of Utah in 1968. He was a teacher and coach at Shelley (Idaho) High School and Hillcrest Junior High School in Murray, Utah. Gary was an assistant professor, associate professor, and professor at Montana State University in Bozeman, Montana from 1968-1994.

Gary had a long and distinguished military career. He graduated from ROTC in 1957 and served 35 years in the U.S. Army Reserve and National Guard. He retired from the Army Reserve in 1987 as a full Colonel. He served in Army Reserve units in Utah, Idaho, and Montana and his last assignment was commander of the 159th Support Group, Helena, Montana.

In 1959 he married Linda Fox from Lehi, Utah. Their marriage was solemnized in the Salt Lake Temple in 1960. Together, they had five children:  Allyson Kreiger (Bill), San Antonio, Texas; Gary Ferdinand Evans Jr. (Jill), Rexburg, Idaho; Angella  Hancock (Marty), Thatcher, Arizona; Andrea Evans, Prescott, Arizona; Isaac Evans (Jodi), Denton, Texas. Gary and Linda were blessed with 23 grandchildren and 28 great-grandchildren. His passion was his family and he loved teaching his wife, children, and grandchildren to play tennis, bowl, camp, and fish.

His second passion was fly fishing and both of his sons were licensed fly fishing guides in Montana and Patagonia, Chile. He and his wife owned and managed a fly fishing resort on the Madison River in Montana for ten years.

He was preceded in death by his wife Linda Fox Evans and brother Michael S. Evans. Gary is survived by his five precious children, 23 grandchildren, 28 great-grandchildren, his brother Bill Evans of Port Townsend, Washington, and his sister Marcia Russon of Bountiful, Utah.

The funeral service will be lived streamed from the Wing Mortuary Facebook page starting at 11 a.m., Saturday, March 28, 2020. A family viewing will be held one hour prior to the service. Interment, Lehi City Cemetery. https://www.tributeslides.com/tributes/show/2Y4M8F4YM4MP5RK9