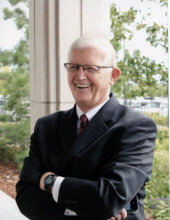 Ralph J. Haws passed from this life on March 2, 2020, with loved ones nearby. Ralph was born March 26, 1939, in Lehi, Utah to Jay Knollin and Edith Broadbent Haws. Ralph had a happy childhood; he attended the College of Southern Utah on an athletic scholarship, playing on the basketball team. He married Connie Ann Dean on March 19, 1958, in the Salt Lake Temple, and they began their life together in Cedar City. Ralph later attended Brigham Young University graduating with a B.S., an M.S., and EdD degree.

Ralph loved his family. He worked hard to make and build happy lasting memories with them. He wanted his family to be forever!

Ralph loved people! He loved visiting with everyone he interacted with. He loved learning about them, and their life. He was definitely a people person. Ralph worked for Jordan School District for over 30 years. He began as a speech therapist and retired as Administrator of Special Programs. He was President of the Jordan Board of Education 2001-2002

Ralph was an active member of the Church of Jesus Christ of Latter-day Saints. He made many dear associations as he served as a Bishop in Midvale and also in the South Jordan singles ward. Ralph and Connie served two missions. They served an 18-month CES mission in the West Indies where Ralph served as a counselor to the mission president. They served an 18-day mission in the Hill Cumorah pageant. Ralph and Connie also enjoyed working in the temple baptistry for several years.