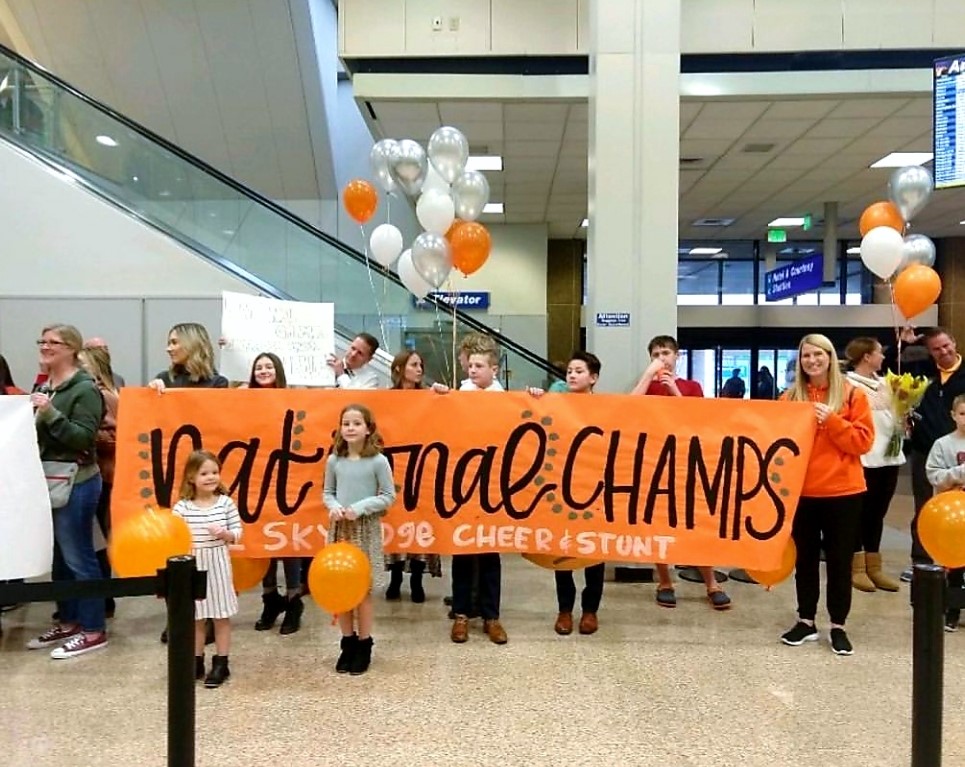 “They really focused on the notes they got from the judges during the preliminaries on Friday. They went all out and left everything on the floor. It was amazing and exhilarating to see them win – the memory of that moment is going to stand out for me for the rest of my career,” said Gina Romney, Head Cheer Coach at Skyridge. Romney and her assistant coaches; Paige Gerber, Jessica Bowman, and Kamille Wily, were with the rest of the SHS Cheer Team high in the stands at the auditorium when the rankings were announced. “If I had known they were going to win, we would have been sitting on the front row!” said Romney. The SHS Crowdleader team took fourth place in preliminary competition and two California schools, Agoura and Oakmont, were first and second. The preliminary results comprise 30 percent of the final score. The California schools have traded the national title in the Crowdleader Division for the last decade. “Our team swooped in and took the title away from those teams. They shocked everyone!” said Romney.

The purpose of the USA Crowdleader Division is to unite an entire program to involve the crowd. The teams are presented with a game-time situation, mid-performance, and they execute a cheer based on the situation. “The team has to be ready to respond and they have to know the sport well enough to tailor the cheer for offense or defense. It keeps them on their toes,” explained Romney. This is the first year Skyridge has competed in the Crowdleader Division. Romney saw the competition in 2019 and could feel the electricity in the room. The focus was on celebrating traditional cheerleading and getting the crowd excited. “I remember thinking, ‘We need to be part of this,’” recalled Romney.

“There’s no better feeling than walking off that floor knowing your team killed it. We beat 14 teams, including the team that won it eight years in a row, and we worked so hard for it,” said Kenzey Hunt, a member of the Crowdleader Cheer Team at Skyridge.

“Cheerleading is highly athletic. It takes hours and hours of practice and mental strength. They’re learning life skills and they have the opportunity to feel successful. We as coaches see the bigger picture – we know that there is life beyond high school. They’re learning now not to quit when things get difficult,” said Romney. She and the other coaches look for kids with tumbling skills, good grades, team players–but they also need those incredible kids who can inspire the team and the crowd as cheerleaders.

“So much of cheerleading these days is skill-based. We’re really pushing the laws of physics with stunts. Having those kids who can light up the room is also a vital part of our program. I’m so thrilled that these kids are national champions!” said Romney.

The 37 Skyridge High School cheerleaders, including six boys on the stunt team, have no season – they cheer all year long. “We just finished nationals and we have boys and girls State basketball for the next two weeks. In March we have tryouts. It really never slows down,” added Romney.