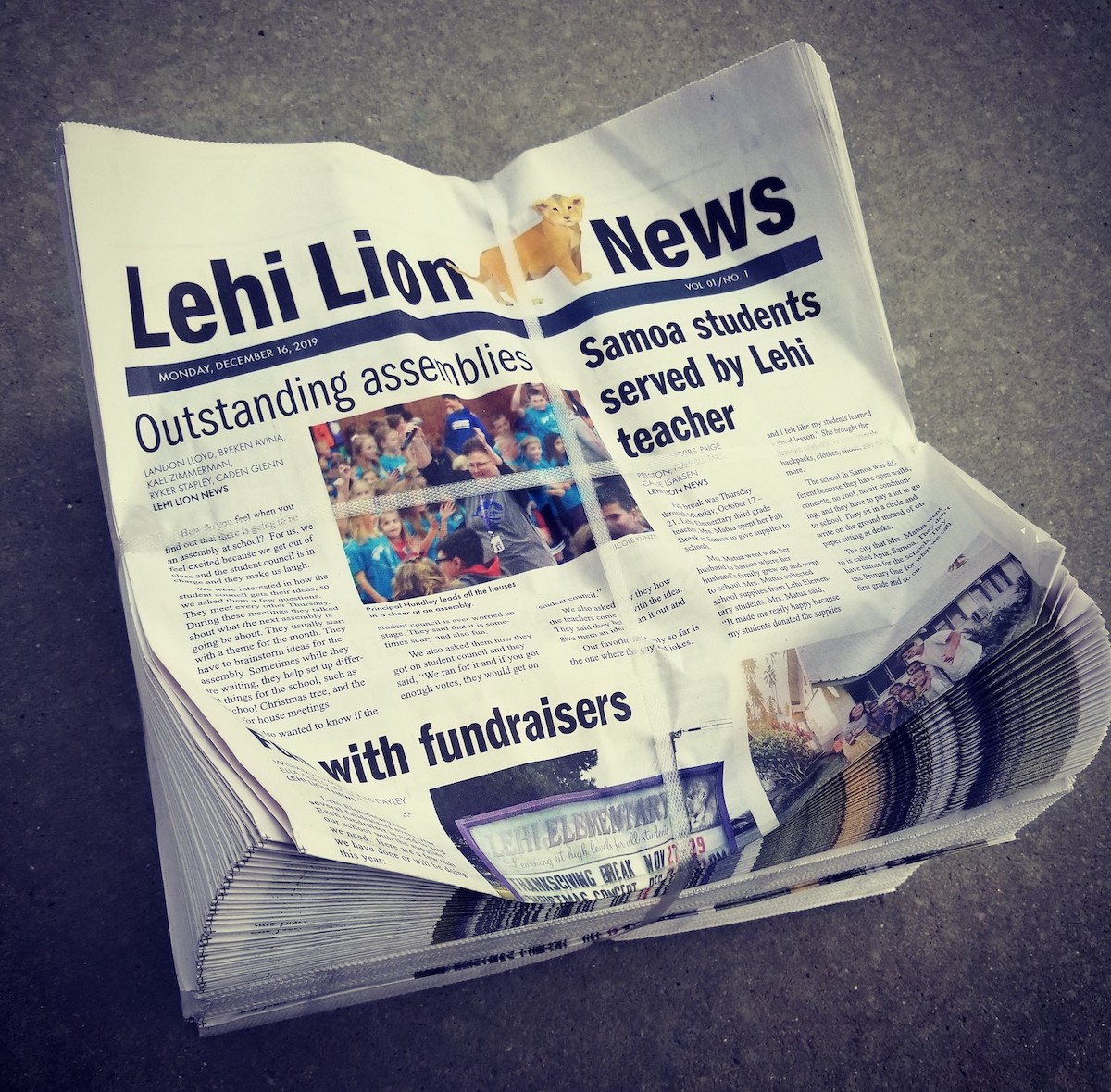 On the last day of school for 2019, students at Lehi Elementary got a special delivery – a copy of the Lehi Lion News. About 90 kids from two fifth grade classes and one fourth grade class made up the reporters, photographers, cartoonists, and editors for the school newspaper. The students went through the entire process of creating a newspaper from pitching stories at an editorial meeting in September to delivering the four-page newspaper printed on real newsprint.

The idea to do a real newspaper with the elementary students came to me after I’d been in a few School Community Council meetings. I was surprised to learn the greatest academic need at the school was in English and Writing – I thought it would be Math. When the 2019-2020 school year began, I asked Principal Kerri Hundley if I could start a student newspaper even though I had no idea how to organize it, and she recruited three wonderfully patient teachers; Katherine Ferre, Sheila Thomason, and Shauna Alvarado.

In September, all three classes (more than 90 fourth and fifth grade students) gathered for an editorial meeting. After I explained what a newspaper is, the teachers organized story teams of four or five kids and the teams picked the story they wanted to write. While the teams were assembling, a boy asked me if he could do a cartoon for the newspaper. Other students suggested story ideas that weren’t on the board. It was an encouraging start.

“My fourth-grade students were so engaged in this project. Creating something for the entire school to see was a powerful motivator and each student really put their best foot forward. I loved watching my students work through the process and come together to create something they were all proud of!” said Shauna Alvarado.

Once a week during October and November I would come to the classes and visit each team to see how they were doing. Some teams were very organized with lists of questions and people to interview. One session was spent coming up with catchy headlines. My all-time favorite question came from a team of dedicated girls who wanted to know how to start their story after they had all the quotes and information they needed. I wonder that every week!

“The students loved this project and took it very seriously. I don’t know when I’ve had so many people interviewing me. It was great to see their enthusiasm,” said Principal Hundley. One team of boys asked Hundley about her Thanksgiving traditions and she mentioned a family recipe for Carrot “Sue Flay” for Thanksgiving dinner.

“This was a fantastic experience for the students and helped them practice so many important skills,” said Sheila Thomason. One of those skills was time management. The hard deadline snuck up on a few teams, but most were able to get their stories handed in on time.

I did a final edit on the 21 stories with help from Lehi Free Press intern, Molli Eaton. The Lehi Free Press Creative Director, Johnathon Brown, did the layout and came up with a masthead for the first edition of the Lehi Lion News. Tooele Transcript Printing printed the newspaper, funded by Lehi Elementary PTA and the Alpine School District Foundation. The students delivered the newspapers to each classroom on December 19 before the holiday break. The sight of elementary school kids reading the newspaper with so much interest is a rare and pretty great one.