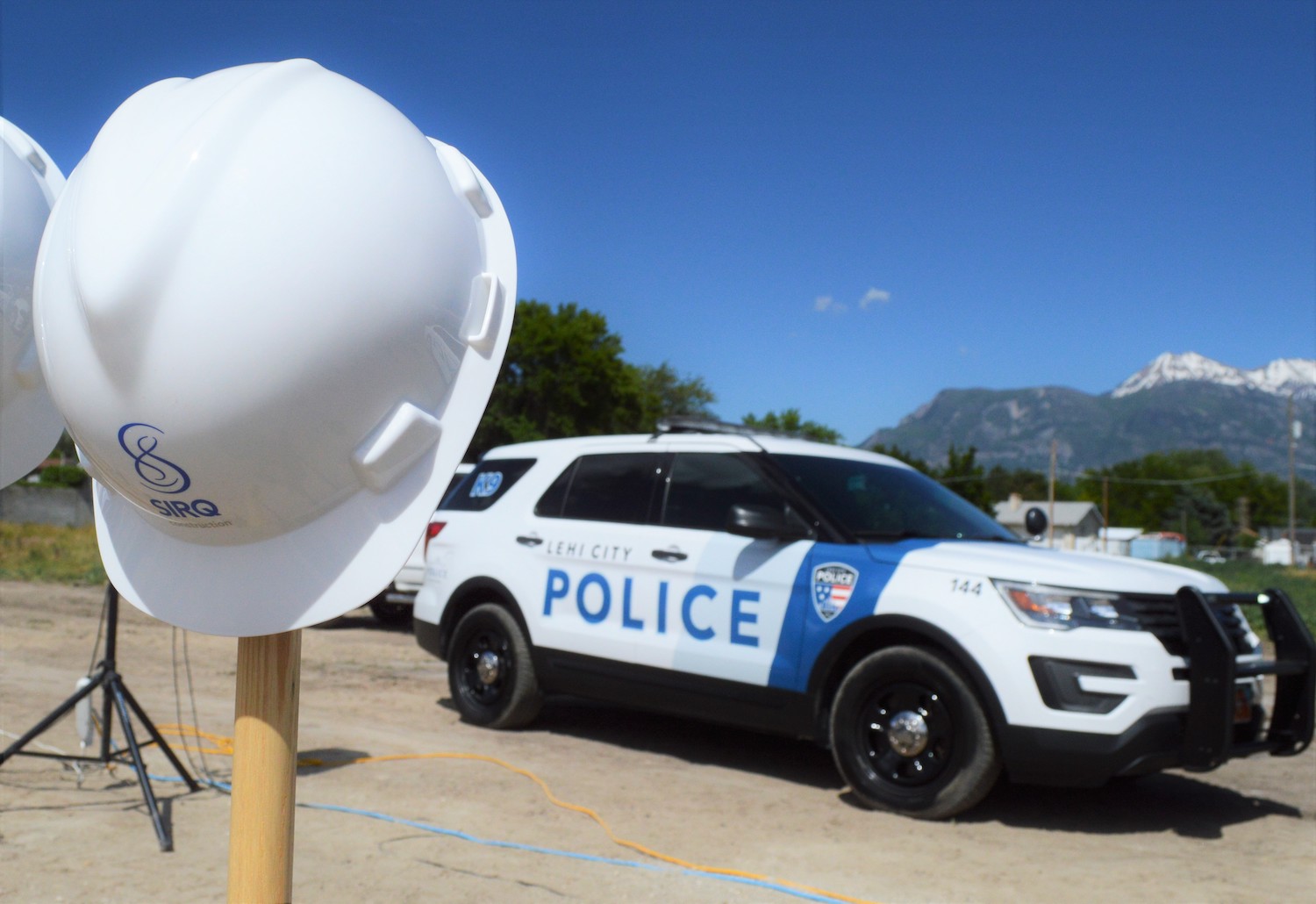 Construction on the Public Safety Building on 100 East and 100 North began on Tuesday, June 18, with an official groundbreaking ceremony attended by Lehi Police Department and city officials.

“This is an event that has been a long time coming, from a needs assessment to public workshops to design, and now finally we’re breaking ground,” said Lehi Police Chief Darren Paul. The new building will be called the Joseph Adams Public Safety Building after Lehi Police Officer Joseph Adams who was shot and killed during a traffic stop of a DUI suspect in August 2001. Officer Adams was a Utah National Guard veteran and had served with the Lehi Police Department for four years when he was killed. He was 26 years old at the time, with a wife and a 7-month-old son. Joseph Adams’ parents, widow, and son Kade, now 18, attended the groundbreaking ceremony.

“I want to thank the citizens of Lehi City, present and past mayors, and city council members who have been so supportive all of these years. I think it’s a remarkable thing for us as a family not only to celebrate the opportunity to start construction on a building to house this great police department but for those of you who have a tender memory of a young man whose name will be on this building,” said Thad Adams, father of Officer Joseph Adams. “It’s significant to us that Joe Adams will continue to be identified as part of the Lehi Police Department.”

“Joe Adams isn’t only a part of the Lehi Police Department, he’s a significant part of Lehi,” said Mayor Mark Johnson. “There’s no question that we needed a new facility for our police department. We don’t want any other city in the state to have a better police facility than ours!”

Johnson went on to describe his doubts about removing the historic Broadbent’s building to construct the new public safety complex in its place. “I asked if I could get in the crawl space and look at the foundation. The response caught me off-guard because they told me there was no crawl space. Then they told me there was no foundation, the building was sitting on a slab,” remembered Johnson. “I’m surprised that building stood as long as it did under those circumstances!”

“It’s a real credit to the design of this new facility that I have not heard any criticism about the design or the fact that we’ve had to remove a historic building,” continued Mayor Johnson. Curtis Miner Architecture has incorporated an homage to Broadbent’s on the outside of the new public safety complex by using the same color brick and arched second-floor windows as the old store. A wall on the inside of the new structure will include bricks from Broadbent’s.

Mayor Johnson and members of the City Council; Paige Albrecht, Chris Condie, Paul Hancock, Mike Southwick, and Johnny Revill, joined Chief Darren Paul and Kade Adams, Joseph Adams’ son, in digging the first shovels full of dirt on the new public safety complex at the groundbreaking ceremony. Construction is well underway and is scheduled to be completed by September 2020.