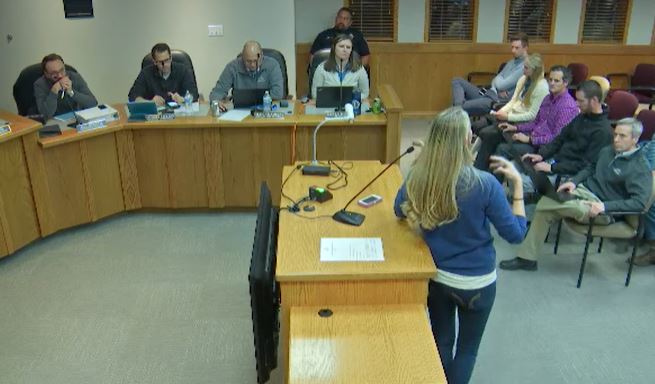 Lehi City Planning Commission met for a work session and a minimal agenda on Thursday, December 5. Every item on the agenda related to Ivory Development’s plan for development of  the Jonsson Mink Farm located at 700 South 1900 West in Lehi. The proposed Ivory plan includes requests for density bonuses in Ivory developments in two other areas—Ivory Ridge and Holbrook Farms.

Chris Gamvroulas, President of Ivory Development, attended the meeting to explain the deal Ivory, Lehi City, and the Jonsson family have developed for the beleaguered mink farm across from the Sports Complex on 700 South in Lehi. “This is a partnership with us and the City. It’s a creative solution to the problem of the current incompatible use of the land,” said Gamvroulas of the Jonsson mink farm. Gamvroulas said Mayor Johnson and Lehi City approached Ivory Development and asked them to buy the land.

“We have the ability and the resources to build this out and eventually recover our investment. This is not a quick turn on capital. Lehi City reached out to us and said, ‘See if you can buy this property. We’d like to get rid of the mink farm.’ It’s been a long and winding road to get to this point,” continued Gamvroulas. Ivory Development requested amendment changes to the Ivory Ridge Area Plan and the Holbrook Farm Area Plan as part of a package deal with the purchase and development of the Jonsson property.

Planning Commission Chair Matt Hemmert opened the public hearing for the Jonsson Mink Farm Concept and instructed citizens who wished to address the commission to keep their comments to three minutes. City Council Member-elect Katie Koivisto asked for ten minutes to explain to the residents in the chamber more about the agenda item. Commissioner Hemmert allowed Koivisto six minutes. She turned her back to the Commission and addressed the audience, offering her version of the history of mink farms in Lehi City.

“For Ivory to come in and say ‘we’re purchasing this land for this amount of money, but we’re going to need to recoup our losses by increasing density’ is a flat-out lie. I deal with builders every day and I understand how this works. They can still make a profit with low density,” said Koivisto. “The problem with this deal is that it’s not just the Jonsson property, it’s the east side and Holbrook Farms. They’re taking advantage of us,” Koivisto continued.

Several more residents expressed objections to the deal Ivory Development presented, as well as concerns about adequate parking, over-crowded schools, and an increase in traffic in the area.

“In our recent election Katie beat out Johnny Revill by quite a bit and this appears to be a run-around that election. The best thing to do is table this until the new year,” said resident Darwin Rehart.

Another Lehi resident, Jason Turner expressed support for higher density on the Jonsson property. Turner quoted studies indicating high density housing attracts people without children, which means schools wouldn’t be over-burdened with the new development. The study also found fewer vehicles and trips in and out of high-density housing.

Keith Jonsson, owner of the mink farm in question, addressed the Commission as a part of the public hearing . “We’ve been in discussions with the last three mayors trying to make this work. This decision wasn’t made lightly. Moving is a major investment for me.” Others then addressed the Commission regarding the Ivory deal. Since Jonsson didn’t use all three minutes of his allotted time, he returned to the microphone and explained that he and Ivory Development “weren’t making a lot of money,” with the deal they were proposing. Koivisto came back to the podium to comment further on the same agenda item she had previously commented on but was stopped by Commissioner Hemmert. Koivisto asked those in the chamber to yield their time to her, but Hemmert stopped her again, citing rules of order. “You know we’ve done that in the past, Matt. That’s ridiculous,” Koivisto said before taking her seat.

Public hearing on the Jonsson Mink Farm was closed and Gamvroulas, President of Ivory Development, came back to the microphone to address concerns. He assured the Commission that there would be plenty of parking–four per unit, plus one guest stall per unit. The proposed development would also include substantially widening 700 South to include a bike lane and more parking.

“We’re here in a public meeting talking about this, being very open about what this proposal is. This has been ongoing since 2004. The City asked for our help because we’re a known commodity. There is a regional park across the street from this mink farm that is not being utilized because they can’t turn the lights on. This development has city-wide implications,” Gamvroulas said.

Since the other amendment requests by Ivory Development at the December 5 Planning Commission meeting were part of a package, the commissioners decided to hear all the proposals before making any motions. Ivory requested amending the Ivory Ridge Area Plan to add 56 units for an overall density of 3.86 units per acre. They presented a concept for a mixed-use development on 7.8 acres at approximately 3360 North Center as well.

Public comment on the Ivory Ridge addition and the North Center project were all negative. Several residents mentioned overcrowded schools near Ivory Ridge and concerns about safety with more traffic in the area. “We have to make amendments as we go. A lot has changed with retail in the last decade, we have to adjust,” explained Chris Gamvroulas.

Regarding Ivory’s requested amendments, Koivisto spoke again. “Do we alter the Constitution? No. Ivory shouldn’t amend the General Plan. It’s the same thing. This is a bait and switch. What’s there is what was agreed upon in the General Plan,” said Koivisto.

“Ivory needs to provide the required amenities to get a density bonus. You need to hold the developers to the code,” said Lehi resident Michelle Stallings.

“This ‘all or nothing’ deal doesn’t sit right with me. It sounds like shady business,” said Lindsey Bolter, a Lehi resident near the Jonsson farm.

Regarding the requested Ivory density amendment, Gamvroulas said, “It is not possible to purchase the Jonsson property without being able to spread out density in other locations. With all due respect to the Council Member-elect, she doesn’t know the finances or what the inputs are. If it’s possible to make something work there, the City would have done it already.” Someone in the chamber shouted, “Wrong!”

“This is not so much an ‘all or nothing’ deal as it is a Rubik’s cube we’ve put together. They have to work together, so we’re presenting them as a package deal. All your City staff reports recommend this for your approval. There is strong evidence that supports this being a good thing for your city,” Gamvroulas continued.

When the public hearing for the Ivory Ridge items had closed, Commissioner Greg Jackson, a history professor at Utah Valley University, said, “A comment was made about the immutability of the Constitution. I’m sure the Council Member-elect was speaking off-the-cuff, but I feel obligated to point out that the fifth of seven Articles is literally dedicated to making changes to the Constitution. We have chosen, as a country, to change it 27 times. Making amendments is part of this process. That is something, to me, that needed to be corrected on the record.”

“Lehi is in this predicament because we’ve been developing the same way for so many years. I like high density. What bugs me most about this is we’re setting a standard for subsidizing. Now we need 365 units out of five acres to make it feasible? It seems like the City is being taken advantage-of a little bit in subsidizing a developer and property owner. To me it seems absurd to require nine units per acre to make something ‘pencil,’” said Commissioner Abe Nielsen.

“Calling this ‘high density’ is a misnomer. This isn’t a high-rise building. It would be a huge benefit to get to use the park. The reason it’s so busy during the day is because we can’t use it at night. I do think these proposals should stand on their own, though,” said Commissioner Roger Ellis.

Expedition trekkers have adventure of a lifetime