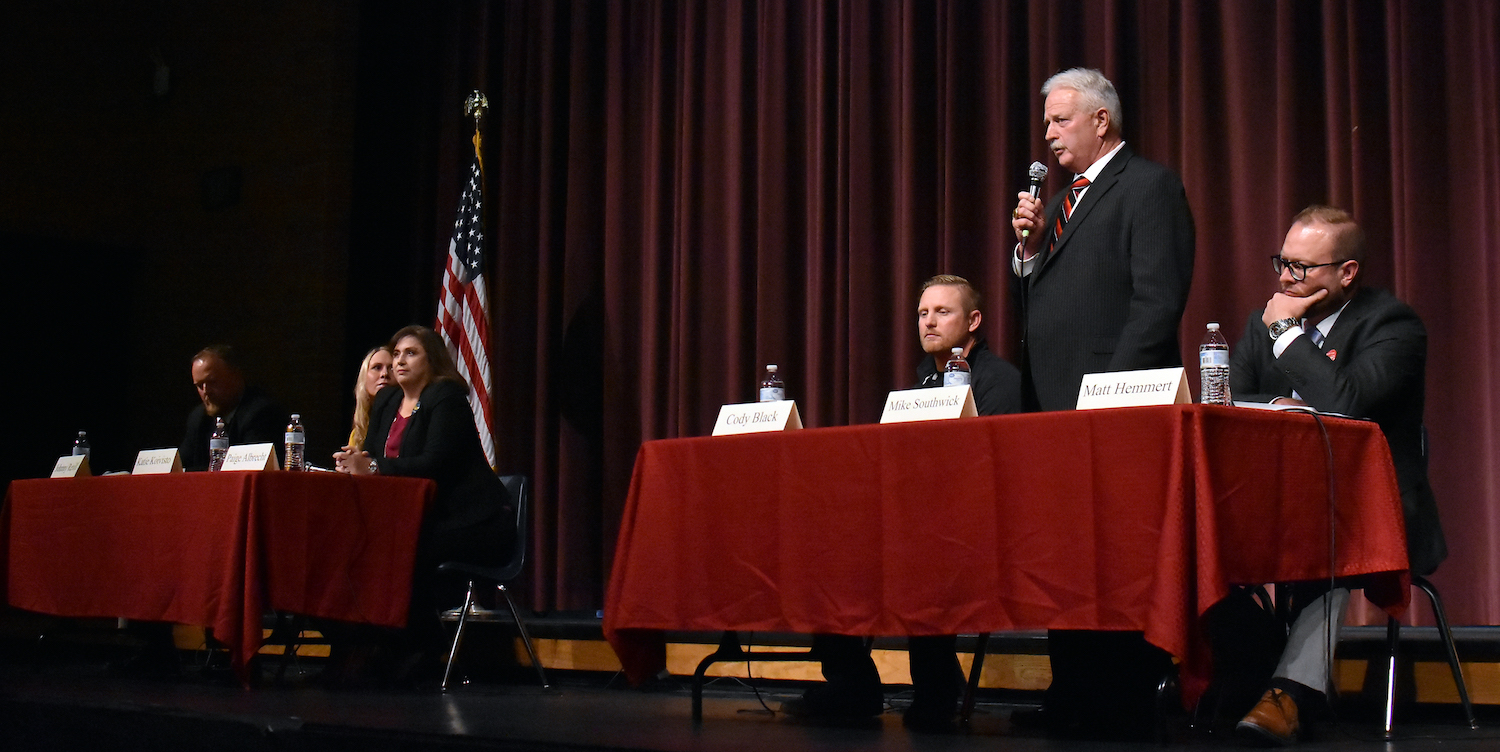 On Thursday, October 24, the Lehi Free Press hosted a Lehi City Council candidate debate at Lehi Junior High School with over 150 residents in the auditorium.

The format, different from past Lehi City election debates, began with all candidates responding to a previously received question, followed by each candidate responding to three individually specific questions, with other candidates allowed to comment with a rebuttal or response if they felt inclined.

Debate moderators and Lehi Free Press reporters, Nicole Kunze and Skyler Beltran asked the first question to all six candidates, “Do you support Lehi City subsidies for both private and public community amenities like Thanksgiving Point, the Legacy Center and the Golf Course?” A majority of the candidates responded with support for continued and future subsidies for these community amenities. Cody Black was the only dissenting view and said “I don’t know how we can do that fairly and decide what recreation we should spend on, so I say no. I’m in favor of subsidizing places like the Legacy Center to an extent. I’d like to look into that a little bit more. We need to find a way to make that self-sustaining.” Current Planning Commission Chair and City Council Candidate, Matt Hemmert, also had a slightly differing view, “We’re creating Lehi as a destination instead of a pass-through on the freeway. I’m all for continuing that, but not for perpetual subsidies. I’m for one time or time-bound subsidies.”

Current Councilmember Mike Southwick, who is running for a third term, was asked to address the street department’s recent embezzlement scandal that cost taxpayers nearly $800,000. “Mike, with the recent news of misused funds by a City employee, how did this get past the City Council for over five years and what measures are being taken to ensure protection from future loss?” Southwick responded by saying “There are measures being taken at the City at this point to rectify some of those things. Policies and procedures are being changed. How that got past, I can’t really say, but it’s something that did. It’s unfortunate that it did and at this point, that’s all I can say, as it’s still under investigation.” No other candidates chose to comment or question Southwick’s response.

The most contested question of the night was regarding the current mass-grading project in Traverse Mountain. When Councilmember Paige Albrecht, who is seeking re-election was asked “Paige, you voted to approve the current mass-grading project in Traverse Mountain, do you currently stand by that decision?” Albrecht expressed defense of her vote, “What a lot of people don’t realize is the developers up there already had the right to do mass-grading, they just didn’t have the right to do it with export. They could’ve taken all of that and moved it to different places on the residential streets and we wouldn’t have had any control over things like dust mitigation. In addition, they moved a lot of the density from higher up on the mountain, down closer to the freeway where the transportation is, reducing the number of trips through that neighborhood and reducing the emissions that are poured into the air. I think that was a good move. They gave us a section up there for a new school in Traverse Mountain–donated! They also gave us some park land and open space. I think it was absolutely a good decision and in the best interest for residents of Traverse including the health, welfare and safety of the children in that community and I stand by it.” Incumbent challenger, Katie Koivisto questioned Albrecht’s response by saying “Paige, how did the City come up with the definition of “mass grading” instead of mining?” Albrecht passionately answered, “That didn’t come from us, the state gave us definitions and guidelines.”

Koivisto also expressed her dissatisfaction with transparency surrounding Lehi City and its governance. That sentiment was refuted by incumbents Albrecht and Revill. Albrecht noted that all City meetings are streamed online, and the City is engaged on various social media platforms. Revill seconded the defense by saying “All information packets received by the City Council members are online. Anyone can see them.”

The nearly one-and-a-half-hour debate concluded with a positive question, for which the crowd expressed appreciation. “What do you most admire about the candidate to your left?” The varying answers included:

Black to Southwick: “I admire Mike’s kids and his passion to serve the City.”

Southwick to Hemmert: “I’m impressed with Matt. He studies the issues. He seems to know what he wants to do and what direction he wants to go.”

Hemmert to Revill: “He is an absolute gentleman. He is a good guy and I see him as a friend.”

Revill to Koivisto: “She is extremely passionate and fearless. We don’t always see eye to eye. but I admire her passion.”

Koivisto to Albrecht: “She is a terrific public speaker with passion and drive. She is an amazing mother and is dedicated to her boys.”

Albrecht to Black: “I appreciate his work for baseball in Lehi. He is a small business owner with savvy business sense.”

The General Election is Tuesday November 5. Mail in ballots must be post marked and mailed by Monday, November 4. The Lehi Free Press will post election results online at www.lehifreepress.com the evening of election day.