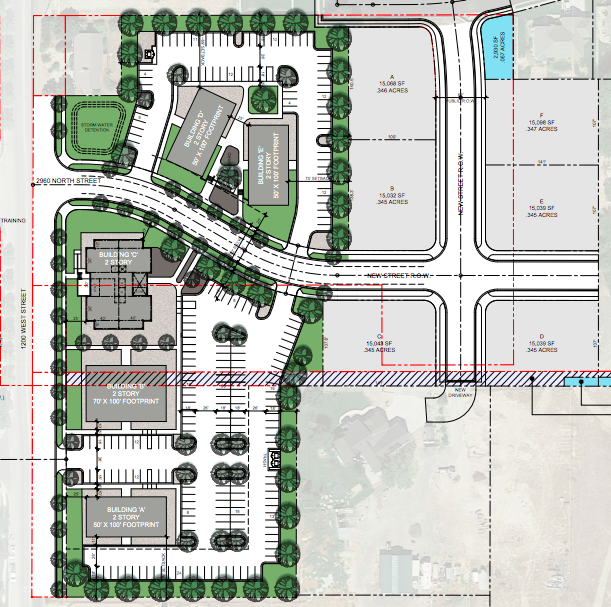 In a Lehi City Council meeting held last week, a neighborhood commercial project was tabled and moved to the September 12 meeting because of public notice concerns. Mike Batt, with The Gardner Batt company, requested a revised concept approval for a neighborhood commercial project off 1200 west. The project design was to include a mix of commercial buildings and several residential lots. According to Batt, the project included a tenant agreement for a dance studio partner, interest from a community bank, and accounting practice.

After Batt’s initial proposed development received a split decision from the Planning Commission, Batt met with City officials and nearby residents to address solutions to neighborhood concerns, while also voluntarily contracting a traffic study by Hale Engineering. Tuesday Batt presented an entirely new concept plan to the Council, leading to frustration from some Council members and residents in attendance due to lack of notice.

Adjacent property owner, Nolan Johnson shared the same concerns during public comment, saying, “This has kind of come out of left field, an 11th-hour proposal.” Although the new plan wasn’t well known until the meeting, Council members and neighboring residents voiced greater support for the changes and felt it addressed some concerns they had about the original proposal but requested a delay to continue working with the developer.

The public comment for the revised proposal still raised some objections. Residents’ concerns include road access and entrance points to the commercial property, as well as the size of the proposed buildings. Lehi’s newly created “neighborhood commercial zone” allows commercial buildings up to 5,000 square feet, but the Gardner Batt company is requesting 7,000 square foot buildings.

Neighborhood resident, Lauren Schreiner, who has been opposed to the project, expressed appreciation for the developer’s effort to work with her. Schreiner said, “I understand there has to be give and take.”

Mayor Mark Johnson closed the public comment and said, “Every single neighborhood commercial project results in controversy.” The City Council unanimously voted to support Councilmember Chris Condie’s motion to table the agenda item to the next meeting on September 10, allowing the developer and residents to work on the newly presented plan.