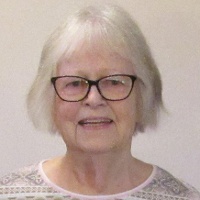 Iris Marie Heinzig Erickson passed away at the age of 81 on Thursday, August 8, 2019. She was born on February 6, 1938, in Hohenstein Ernstthal-Saxony Germany to Walter Kurt and Gertrud Marie (Geiler) Heinzig. Iris was baptized as a member of the Church of Jesus Christ of Latter-Day Saints on August 28, 1946. To escape communist persecution, the family fled East Germany in 1952 and arrived in Lehi, Utah in May 1954. Iris graduated from Lehi High School in 1956 and then attended Brigham Young University. On March 21, 1958, Iris married her high school sweetheart, Gerald (Jerry) LeRoy Erickson in the Salt Lake LDS Temple. They raised two daughters, Barbara and Kim, and two sons, Alan and Robert.

Iris was blessed to be a homemaker. As a talented seamstress, she provided clothes for her children as well as beautiful doll clothing. She was an exceptional cook, canning vegetables and fruits grown in the family garden. She also enjoyed needlepoint and crocheting.