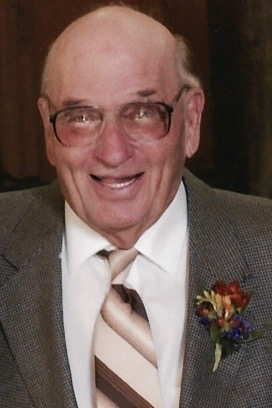 Jack was born on April 5, 1926, in Dawson, New Mexico a son of Patrick Henry Holland and Jesse Meeks Holland. He was the fourth of eight children. He attended Dawson High School and graduated from South High School in Salt Lake City, UT. Jack honorably served his country in the United States Amy Air Force during World War II.

He married his sweetheart Irene Grace Wilson Rich on July 13, 1967, in Las Vegas, NV. They resided in Lehi, Utah for almost 50 yrs. He loved and appreciated the members of the Church of Jesus Christ of Latter-day-Saints in the Lehi 12th Ward.

Jack was a journeyman plumber. He worked for Bechtel Engineering and Construction, then for Geneva Steel, where he retired in 1987.

Some of his many accomplishments included creating Porcelain figurines, for which he won many blue ribbons including “First in the Show” at the Utah State Fair in 2015. He also thoroughly enjoyed woodworking, gardening, fishing, and crocheting. He belonged to the Price Elks Lodge No. 1550 and was a 32nd degree Scottish Rite Mason.

Special thanks to Kathie Harvey, Tina Larson and Peachtree Place in West Haven, UT where he resided the last two years of his life. He enjoyed his stay there and made many friends. Kathie at Peachtree Place arranged for their bus to take several residents to visit him at Pioneer Care Center in Brigham City. They were all going to wear the hats Jack had made for them, but he passed away earlier that same morning. Jack used to always tease the bus driver, Jay, on the way back from outings to “stop at Costco really quick and let him run in to get a hot dog.” So, they took the residents that we’re going to visit him at the care center to Costco and had hot dogs and a toast to Jack!

In lieu of flowers, the family suggests donations be made to Shriners Hospitals for Children.

Condolences may be sent to the family at www.myers-mortuary.com.