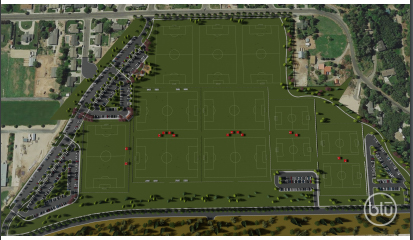 The Lehi City Planning Commission met on Thursday, June 13, for another marathon meeting that included two hours of discussion on the beleaguered Peck Park project, as well as many citizens expressing their grave concerns about a 7-Eleven gas station proposed for construction near neighborhoods on 2100 North. Commission members Matt Hemmert and Abe Nielsen were absent from the June 13 meeting.

Lehi City’s request for a public hearing and consideration for the Peck Park concept located at 1600 North 300 East was the sixth item on the agenda and City staff explained that the plan, which included a drawing for 12 soccer fields, was very conceptual at this point. The agreement the city made with Arsenal Soccer Club, signed by the City Council on December 11, 2018, was for the development of 10 acres now. The plans set forth that when Arsenal will not be using the soccer fields, they will be open to the public.

“I’ve looked at other soccer parks in the state. They are always busy, so clearly there is a need. Multiple fields draw large crowds and the parking in this concept is not even close to being adequate. The parking will bleed into the nearby neighborhoods,” said Commission Member Tyson Eyre.

“We can address that before final approval. Impact fees for parks in Lehi is currently in the red. This is a huge undertaking. The deal with Arsenal is a way to get this park started,” explained Kim Struthers, Lehi City Planning and Development Director.

Many concerned citizens stood in a queue to express their feelings about the Peck Park item with comments about potential traffic issues, the lack of parking, sound and light problems that may come with soccer fields, and construction dust that would interfere with small farms. Shawn Watkins, a resident near the proposed project, pointed out that the concept art was for 40 acres of development, not the ten acres in the Arsenal agreement. “According to this drawing, there is a cul-de-sac on top of my yard. That’s not accurate,” said Watkins.

Bart Preston from Arsenal Soccer explained that a single soccer field is 1.59-acres. Preston said the site concept included in the meeting agenda packet was for a little over 20 acres of the Peck property, but Preston was quickly corrected by one of his colleagues who said their plan was for 40 acres.

“When we phase in the project, the city will get 30 percent of what we develop initially. If that is five fields or ten fields, the city will get exclusive rights to 30 percent of whatever is developed at any point in time. We want to have great parking as well. We’re open to whatever the city recommends. If it means we have to reduce some fields, we’re willing to do that. We’re not looking to develop 40 acres and we’re not planning on putting lights in,” explained Preston.

Liz Peck Anderson, a Lehi citizen and member of the Peck family, read two emails into the public record. The first email was written in 2006 by Mark Johnson, then a member of the Lehi City Council, to former Lehi Mayor Ken Greenwood, who was on a mission for The Church of Jesus Christ of Latter-day Saints in Africa at the time. In it, Johnson told Greenwood that the city would do “whatever was committed to” by Mayor Greenwood concerning the Peck property. In the email, Johnson attached a concept for tournament softball fields combined with leisure acreage for Peck Park and Anderson showed the Planning Commission Members a copy of that concept before reading Ken Greenwood’s response to Johnson in 2006.

Anderson quoted Greenwood’s email, “Peck Park was not envisioned as solely a sports park, but that was a large part of its use – a tournament-type facility… I saw the [deal we made with Pecks] as a benefit to the city and to the Pecks. It breaks my heart to feel the rancor all the way in Africa that seems to have replaced the great feeling over the wonderful opportunity to benefit all parties for generations to come. I feel I need to remind everyone that the Pecks did not have to sell the property to the city – it was just under contract to Ivory Homes. It was not an easy task to pull that out of the fire. Their family will take many years to heal these wounds caused because they worked with the city. The talk is that we did them a favor and that is bull! We came up with a scheme that made sense to them. They lost money big time! If it takes ballfields to make them happy, give them ballfields! I pulled every string in the shop to get that property for the city. I risked life-long friendships, made promises in good faith. Do not screw this up! It was handed to the city on a silver platter.’”

Anderson became emotional as she explained to the Planning Commission that the Pecks had an agreement with the city and somewhere there is a concept for softball fields because Mark Johnson emailed it to Ken Greenwood in 2006. “You need to honor that agreement. I am just so frustrated! Mayor Johnson has no integrity if he doesn’t honor this deal,” Anderson concluded, walking back to her seat amid applause in the chamber.

Cole Peck, Anderson’s brother, said, “We didn’t sell this property to lease it to a private entity. I don’t have a problem with soccer, but it’s a poor use of city funds. There was a vision and my Dad sacrificed a lot. He came to us as a family and said, ‘I think this is good for the citizens of our town. We’ve been blessed and we need to leave this legacy for our town.’ It breaks my heart to see soccer fields in the best part of the land. I think we need to move them,” said Cole Peck, a member of the Peck family and property owner near the project. Cole Peck also informed the Commission that the concept design presented by the city doesn’t work for sewer because of the grade on the land.

“I want to help you build the best park in the state. If you want to add our 17 acres to the park to make it easier to get sewer in there, let’s do it. Let’s make sloped seating so we can watch our kids play or move the rodeo grounds – the sky’s the limit! I just don’t want you to do something that’s not a benefit to the citizens. We need more vision before we give away the farm. Lehi is behind other cities with their facilities. Let’s do this right,” continued Cole Peck. He then gave a copy of the purchase agreement between Lehi City and the Peck family for their 70 acres to each of the commission members. “The city doesn’t have the right to give the land to Arsenal to build. That’s our right that we preserved. This is a binding contract,” said Cole Peck.

Lehi City staff explained that their goal in presenting the Arsenal concept plan was to get feedback from the public and find out if they were heading in the right direction and explained that the concept was not final or fleshed out. Planning Commission Member Brent Everett responded, “The concept is what the public came to comment on. If we can’t get an accurate concept before us, then I think we’re doing the public a disservice. This is the bite of the apple the public gets.”

Lehi City staff proposed to table the Peck Park item until they have a better idea of what acreage Arsenal will be developing. In the motion to table the item, Tyson Eyre stipulated that the public comment would be reopened when the item comes up again. The Planning Commission unanimously voted to table Lehi City’s request for a recommendation on the Peck Park concept.

Opposition to gas station near 2100 North

Many citizens also came to give input on Logan Johnson’s request for approval of the 7-Eleven concept to be located at the northeast corner of 2100 North 2300 West. A gas station is one of the permitted uses of the commercial-zoned land, but citizens strongly objected to the proximity to neighborhoods and the possibility of benzene poisoning. Residents cited studies that even small amounts of benzene have been shown to cause leukemia clusters in nearby neighborhoods.

“There’s a bigger impact here than your bottom line. Even if one kid ends up with leukemia, it’s too many. There’s a better use for that land. The solution is not a gas station,” said Brian Orr, a neighbor to the proposed project, directing his comments to the applicant. Orr had to pause several times to get his emotions under control.

“I struggle with all I’ve heard today. This is a permitted use, they’re following the code, but this is tearing me apart,” said Tyson Eyre. Lehi City Attorney Craig Chambers instructed Planning Commission members that they were opening the city to liability if they denied the request for the 7-Eleven. After more discussion, the item was tabled until July 11 to give the Planning Commission members and the city a chance to review studies on benzyne and to give the applicant a chance to change plans. The commission voted to table the item. The other items on the June 13 Planning Commission were passed with positive recommendations to the City Council without negative public comment.