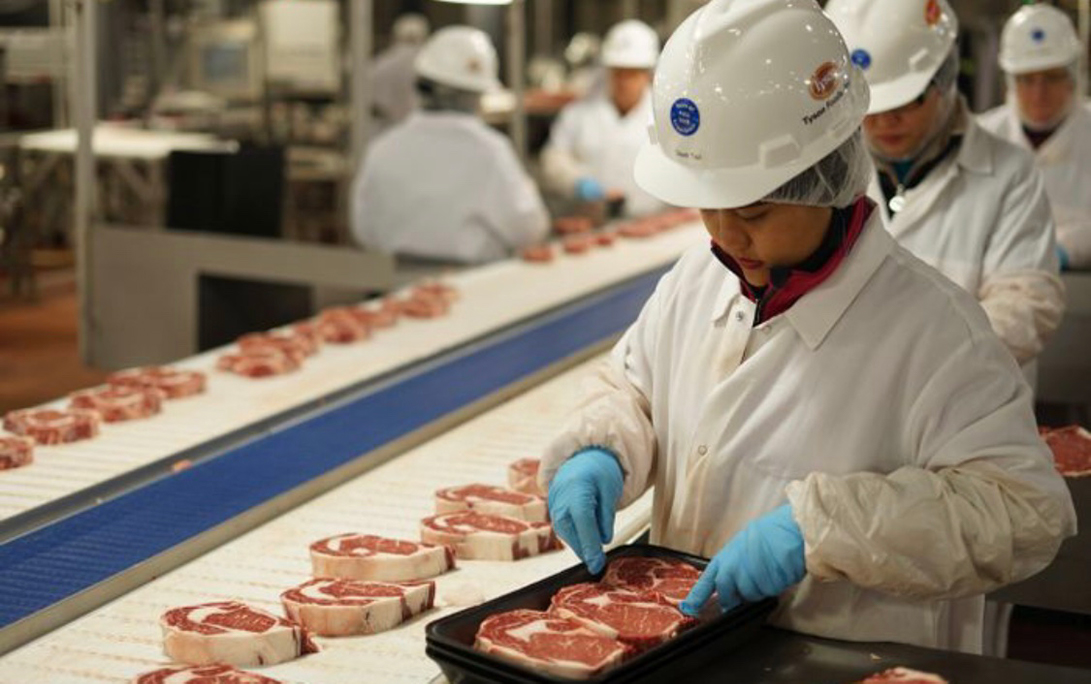 Tyson Foods recently announced plans to build a $300 million, 400,000 square foot plant on 80 acres located about five miles from Eagle Mountain city center. The facility will initially employ about 800 people, then will expand to 1,200 within three years.

“What we are building in Eagle Mountain is basically a large butcher shop to cut and package steak, pork chops, roasts, and ground beef. Those case-ready packages of meat will then be sent to retail grocery stores, like Walmart and Kroger,” said Derek Burleson, Public Relations Manager at Tyson Foods. There will be no “harvesting” or slaughtering at the plant. Large pieces of beef and pork will be delivered to the plant and cut down to smaller pieces for retail packaging.

“We are excited about Tyson coming to Eagle Mountain,” said Mayor Tom Westmoreland. “There are great economic and job benefits for our community. Jobs will be created closer to home. We have the rare opportunity to get to plan the future of this city, we are a blank canvas and get the chance to create the type of community we want to have and to increase our tax base to support the things we want to do. This facility will not only provide jobs but also help build our city’s infrastructure, including roads,” said the Mayor.

Eagle Mountain, with a population of about 40,000, is considered a “bedroom community” largely inhabited by people who commute to a nearby city for work.  “Growth is healthy, and we are working to find a lifestyle balanced with business opportunities without having urban sprawl,” Westmoreland said.

“We had been looking at potential sites throughout the Western U.S. to build this plant,” said Burleson. “We have three other plants similar to the one we will build in Eagle Mountain, that currently serve the middle of the country and the east coast. Utah is a great choice for us to serve the western part of the country.”

“It is part of our culture to support the communities we are in and to develop a relationship with the residents of Eagle Mountain and Utah,” said Burleson.  “We will be investing in education and healthcare and lend support to fundraisers and community events. We plan to serve on the boards of non-profit organizations in the area, donate to local hunger relief centers and you might even see our staff cooking hamburgers at a local event.”

Tyson joins Facebook as the second Fortune 100 company to build facilities in Eagle Mountain. Facebook has broken ground on a data center which is scheduled for completion in 2020. Both Tyson and Facebook were incentivized to build in Eagle Mountain by receiving tax benefits. In May, a $12.3 million tax break was approved by the Alpine School District and the Utah County Commission. Utah’s Governor’s Office of Economic Development estimated that the Tyson project will bring in about $27 million in new state tax revenues over the next ten years.

Tyson will break ground sometime in 2019, said Burleson. The project should take about two and a half years to complete.

Some residents are concerned with the amount of water the facility may use. “There is plenty of water,” said Westmoreland, “and Tyson will be paying for the water they use.” Most companies coming to Utah have no idea how and where our water comes from and how it is managed, said the Mayor. “We had to educate Tyson on how our water is managed. Tyson will not be taking water from future residents and it is not ‘the guy with the biggest straw wins’ scenario.”

“With the use of technology and monitoring, we have figured out ways to reduce the amount of water our plants use by 15% in recent years,” said Burleson, “and after we use the water in the plant, we treat it before it is returned to the city for treatment.”

In addition to hiring employees to work at the plant, Tyson will be hiring local construction crews and vendors to build the plant. “We are in the process of hiring a general contractor, now, and we will be putting bids out for local vendors to work with the contractor.”

Once the plant is complete, Tyson will be hiring hourly workers at $14.50 to $16.50 per hour and will offer competitive pay for managers and other support personnel. They will also offer 401k retirement plans and well as medical benefits. Questions about the plant may be emailed to Tyson at utahcaseready@tyson.com. More information and details about the project may also be found on the Eagle Mountain City website: www.eaglemountaincity.com