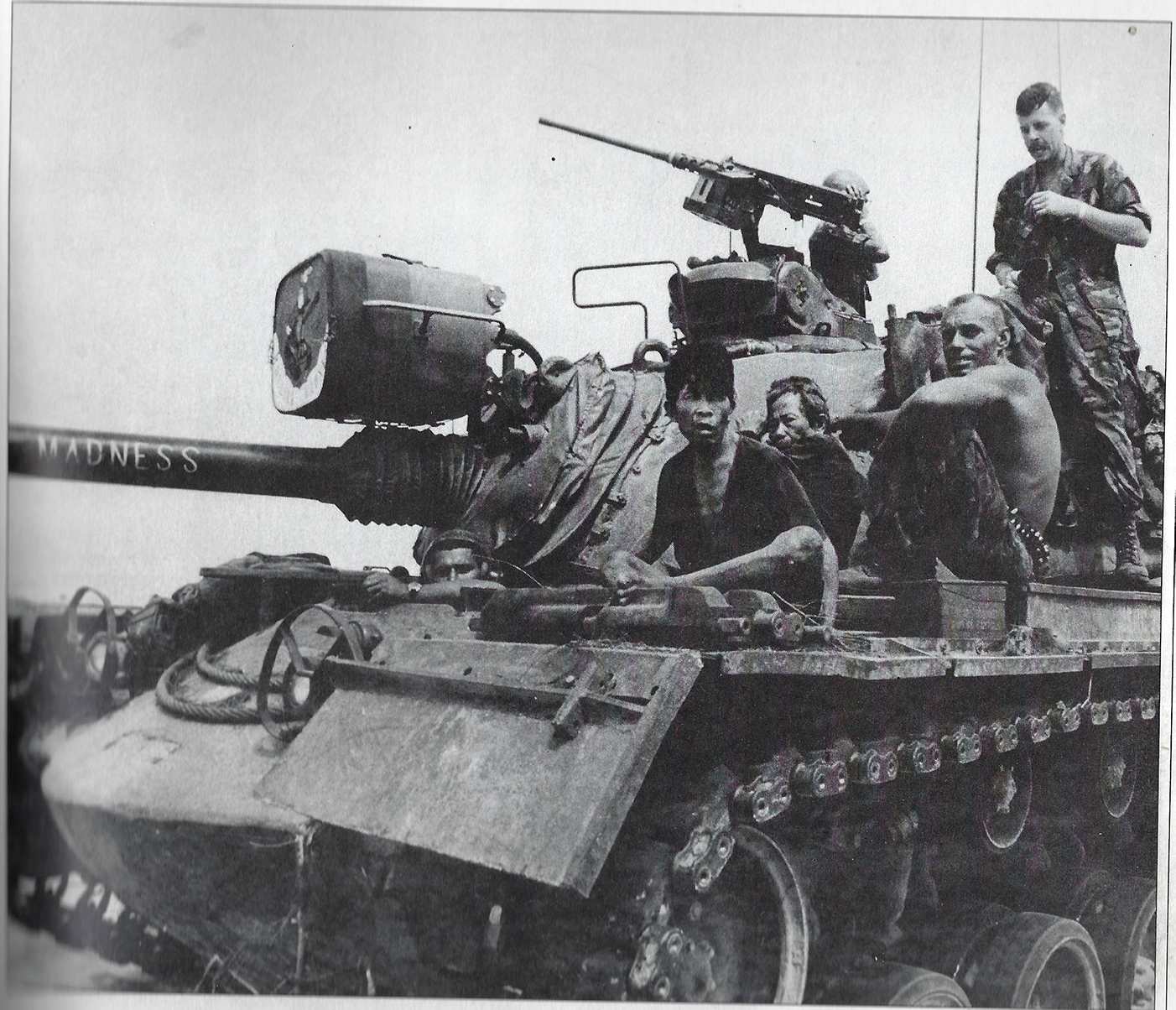 Bill Murdock, an 80- year-old Lehi resident, choked up several times as he described his experiences as a tank commander in Vietnam. Murdock enlisted in the Marine Corp when he was 18 years old. He served three years of active duty and 8 ½ years in the Reserves. Murdock’s father, William Henry Murdock, served in the Navy during WWII. The ship upon which he served was sunk during the war.

Murdock served in Vietnam for one year, 1968-1969. He was in the First Marine Division, 26 Marines, 5- tank and his division was involved in two operations, “Oklahoma Hills” and “Daring Rebel.” He was tank commander of a tank nick named “Rolling Madness,” in both operations.

“Operation Oklahoma Hills,” was a multi-battalion thrust into the mountainous jungle terrain southwest of Da Nang. A headline in the Sea Tiger, a Marine publication, reported Marines Hack Enemy from Hills Hideout. Murdock said, “Our job was to get prisoners, members of the Vietcong, and take them to interrogation headquarters where they would be questioned to find where the Vietcong were hiding.” He added, “We had help from helicopters and gunships.”

The operation lasted more than a month. The enemy withdrew as Allied forces advanced on strongholds along the western approach to Da Nang. Murdock delivered captured Vietcong prisoners safely to interrogation headquarters. “I was kinda a soft-hearted guy, even though I knew the prisoners would cut your throat in a minute.”

In the second operation, “Daring Rebel,” Murdock’s group was ordered to evacuate all the civilians on Barrier Island and relocate them to other villages where they would be safe. The Marines were to clear the island so the island could be bombed. The island was a stronghold for the Vietcong. Murdock said, “The Vietcong would shoot at the villagers, steal their food, and torture them.”

Near the beginning of the operation, Murdock said “When we landed on Barrier Island, 4,000 Marines ran toward the interior of the island. I was proud to be alongside thousands of fellow Marines.”

It was during this operation on September 11, 1969, that Murdock’s best friend, PFC Joseph Louis Golc, was standing on the front of the tank when he was hit by a rocket. “All that was left was his burned boots,” said an emotional Murdock. “We were always being hit with sniper fire.”

In a quote from a book of Vietnam War combat photography, the author, Nick Mills said, “After the battle, you wiped away the mud and the blood, took out your dead and wounded, let the emotions come out, and begin to think about the next time.”

“We were in the field for 41 days. When we were next to a beach, we would try to clean up; but soap does not lather in salt water,” laughed Murdock

The Vietnam War left an indelible mark on the lives of thousands of veterans. One message written in the book The Vietnam Experience, Combat Photographer, penned to Murdock by a fellow Marine who reflected on the camaraderie of these men said, “As one brother in Christ to another, who was delivered from the jungles of Vietnam, I pray with you and for you. Love, Curt.”

Murdock said his time in the Marines and Vietnam changed his life.