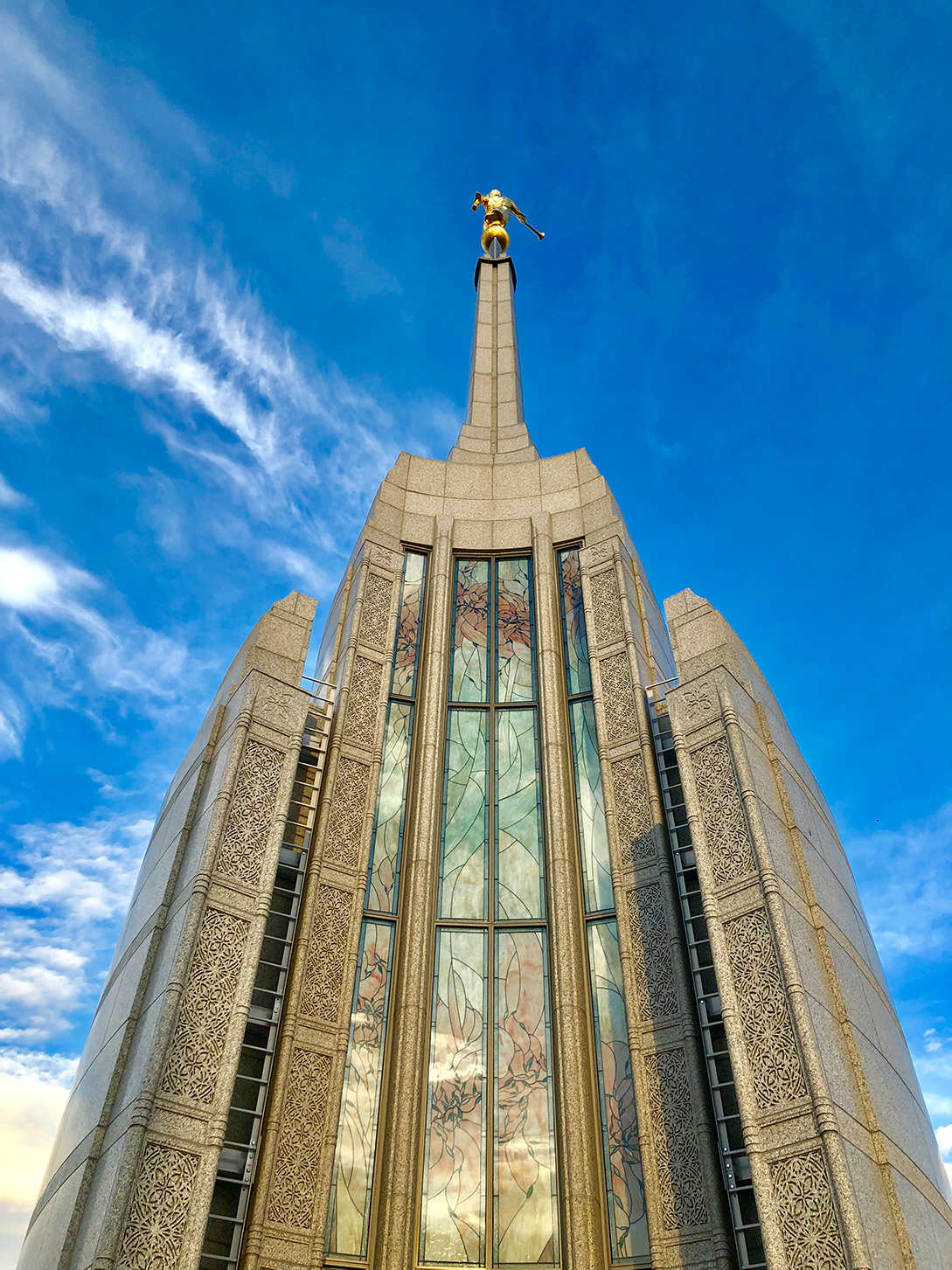 Tom and Gayle Holdman have created stained-glass windows for 90 Church of Jesus Christ of Latter-day Saints’ temples around the world. Most recently, the Holdmans created windows for the Rome, Italy Temple and installed a larger-than-life stained-glass mural in the Visitor’s Center there. The attention to detail in the mural is astonishing, especially when compared to the humble pencil drawing that started it all.

“Here is a temple in the Eternal City, where the ancient Apostles actually walked the streets. Is there a story that can be told of how the Apostles gained their testimony of Christ through this art? That’s really where we started with this piece,” explained Tom Holdman, Founder, and CEO of Holdman – RoK in Lehi. Holdman’s original sketch included only Christ and Peter near the Sea of Galilee, but he decided he had to start over after working with the concept for a while. “You can’t be too attached to your artwork or it will hold you back from improvement,” continued Holdman.

The mural evolved to Christ in a busy marketplace stopping to heal a young person as Peter and a few other Apostles watch. Both Gayle and Tom Holdman spent weeks on just the handhold between Christ and the person being healed in the mural. “How do you make that look like it could be you? We turned the young man so he is more obscure, and we opened the Savior’s hand so that He could be reaching for you. That’s why I say you can’t be attached to your artwork because what we had a few versions before the final version was pretty good, but it’s so much more impactful the way it turned out,” said Tom Holdman.

Every square inch of the stained-glass mural in the Rome Italy Temple Visitor’s Center contains startling attention to detail. Every parable Christ told is signified somewhere in the mural. The Parable of the Talents is represented by an actual Roman coin that has been fused into the stained glass, half hidden by a stone. Tom Holdman has a coin from 80 AD that he didn’t use in the mural because the age of the coin wasn’t appropriate. There’s another real coin in a fish’s mouth in another part of the mural. “This is a missionary tool. People who know the bible and aren’t members of The Church of Jesus Christ of Latter-day Saints can look at this and see that we have common beliefs,” said Tom Holdman. “The Visitor’s Center and the piazza are for everyone.”

Inside the Rome Italy Temple, the Holdmans used the olive tree and especially the olive leaf as a theme. “We try to tie in the concept of the Tree of Life wherever we can in the temples. The olive tree is not only a traditional symbol of Rome, but it’s a symbol of peace. We used the small trailing leaves and vines to make it feel like you’re inside the tree looking out,” explained Gayle Holdman, Designer/Editor/Public Relations for Holdman Studios. The Holdman team considers the surrounding geography of the installation and the plants and trees that are native to it. In the Gilbert Arizona Temple, the Holdmans used the agave plant, in Payson it was the apple tree, and in Hawaii, it was the Kukui tree that represented the Tree of Life in the glass art.

“We used clear crystal leaves to represent the spiritual side, the purification we find in the temple. We used the colored crystal leaves for the temporal or earthly side. The temporal and spiritual sides are both in the temple,” continued Gayle Holdman. The Rome Italy Temple was built on what used to be the grounds of the Italy Rome Mission Home. There was a small olive tree grove on the grounds and former mission presidents of the Italy Rome Mission told the Holdmans that they would ask their new missionaries to take a moment to pray among the olive trees and think about what they wanted their missions to be. “Imagine that hundreds of missionaries have knelt in prayer in the very spot where the temple now stands!” said Tom Holdman.

“When the whole First Presidency and all the Apostles were at the dedication of the temple in Rome there was an excitement and reverence in the air at the same time,” remembered Tom Holdman. “When they all came out of the temple dressed in white, that was just an awe-inspiring moment.”

“I love going to the temple sites and seeing the members in the area and what having a temple means to them,” said Gayle Holdman. Gayle speaks Spanish, having served a mission in the Chile Antofagasta Mission years ago, and she learns the language of the locations where they have worked on the temples so she can speak to the members and understand their stories in return. At the most recent General Conference for The Church of Jesus Christ of Latter-day Saints, President Russell M. Nelson announced a temple in Antofagasta, Chile. “I cried for two hours straight! The closest temple to Antofagasta is a 22-hour bus ride right now. I’m so happy for them!” said Gayle Holdman.

The Holdmans haven’t slowed down since they completed the Rome Italy Temple artwork. On the walls of Tom Holdman’s office within the Thanksgiving Point campus is concept art for an incredible addition to Ashton Gardens, but he can’t talk about that just yet.