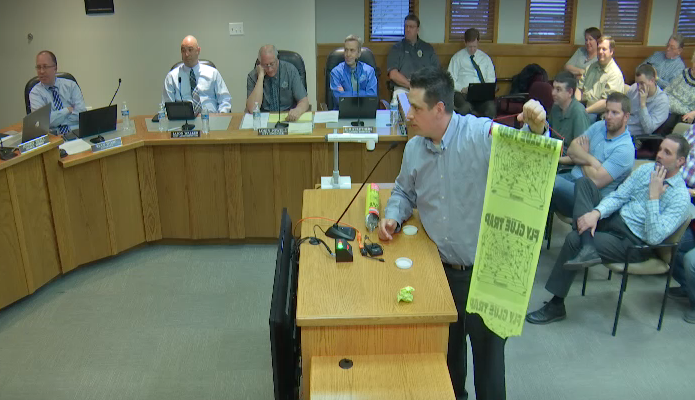 In Lehi City Council meeting March 26, 2019, Lehi City Council members heard over two hours of citizen input on a request from Ivory Development to approve a 65-unit development located at 3200 North 300 West. The Dixon-Ivory Ridge concept plan was denied in a 3 to 2 vote with Councilmembers Albrecht, Condie, and Hancock voting to deny and Council members Revill and Southwick voting to approve.

Ivory Homes was requesting approval of a Lehi General Plan amendment to change the land use designation from VLDR (very low-density residential) to PC (planned community) and in a separate agenda item, approve the concept plan for the development. The Council chose to review the concept plan request first because if the concept was denied there was no need for the change of land use.

Mayor Mark Johnson asked for public input. Last week in Planning Commission meeting, there was more than three hours of public discussion regarding the development. Each comment was limited to three minutes More than fifteen citizens stepped to the microphone to express their support for, or against the project.

Darwin Rhinehart, whose son was hit by a car backing out of their driveway as he walked along 300 West, spoke in opposition to the development. “This is about setting a precedent to reach back and grab more additional lots,” he said. Cindy Owens Slater, who lives three houses from the proposed development is in favor of the concept plan. “It’s a good change because with sidewalks it will be safer. I also sweep out mounds of flies [from the mink farm nearby].” Another resident of the area displayed a long strip of flypaper. “This gets filled twice. When you have 20,000 mink, they eat, sleep, and crap, repeat. I will be excited to get new neighbors. Traffic is not an issue for me.”

Michelle Stallings spoke in opposition of the development because Ivory’s existing amenities in Ivory Ridge development were listed as justification for the requested density bonus. These amenities, which were built years ago, did not match Ivory’s request for an extra 5% in density on the current request. Chris Bowerbank also spoke in opposition, “By approving, you are not following the land use plan.”

Several residents of the area were in favor because of the improvement in the neighborhood. Craig Madsen, Jared Holt, and Aaron Jenkins said they were willing to live with the plan. In all, approximately 18 residents spoke to the Council.

Mayor Johnson reminded the Council, “We have a responsibility to protect property owner’s rights.”

Brad Mackay, the representative for Ivory Development, defended the density bonus request based on amenities which exist in other parts of the Ivory Ridge development, such as a tot pool, lap pool, additional tennis courts, trail connections, etc. When questioned by Councilmember Condie about the amenities being part of the original plan, Mackay expressed the idea that buyers want a higher density product. “We want to create a diversity of product,” said Mackay.

Councilmember Hancock said, “You are continually going back to the trough. Would any other builder get this amount of density bonuses?” Council member Albrecht responded to the residents, “I will be voting “no” because we will be setting a precedent. Amenities should not be ‘banked’ for the future. This is a dangerous precedent for other developments,” said Albrecht. Councilmember Condie concluded, “My role as a councilmember isn’t to make someone’s project pencil out.”

In other business the Councilmembers unanimously approved the following projects:

The final item on the night’s agenda was the vote to untable the resolution directing Lehi City Administration to give formal notice that Lehi City is opting out of the municipal alternate voting methods pilot project.

City Council members, Albrecht, Condie, Southwick, and Revill all voted “yes,” and Councilmember Hancock voted “no”. Regarding the alternate voting method or ranked choice voting, Condie said, “What is the benefit?”  Revill said, “Wording in the bill is not clear.” Albrecht said, “Will funding to educate voters be available in ten years. I just don’t think we are there yet.” Stan Lockhart and Josh Daniels were in attendance to answer Council member questions.

Carvana “auto vending machine” to be built in Lehi