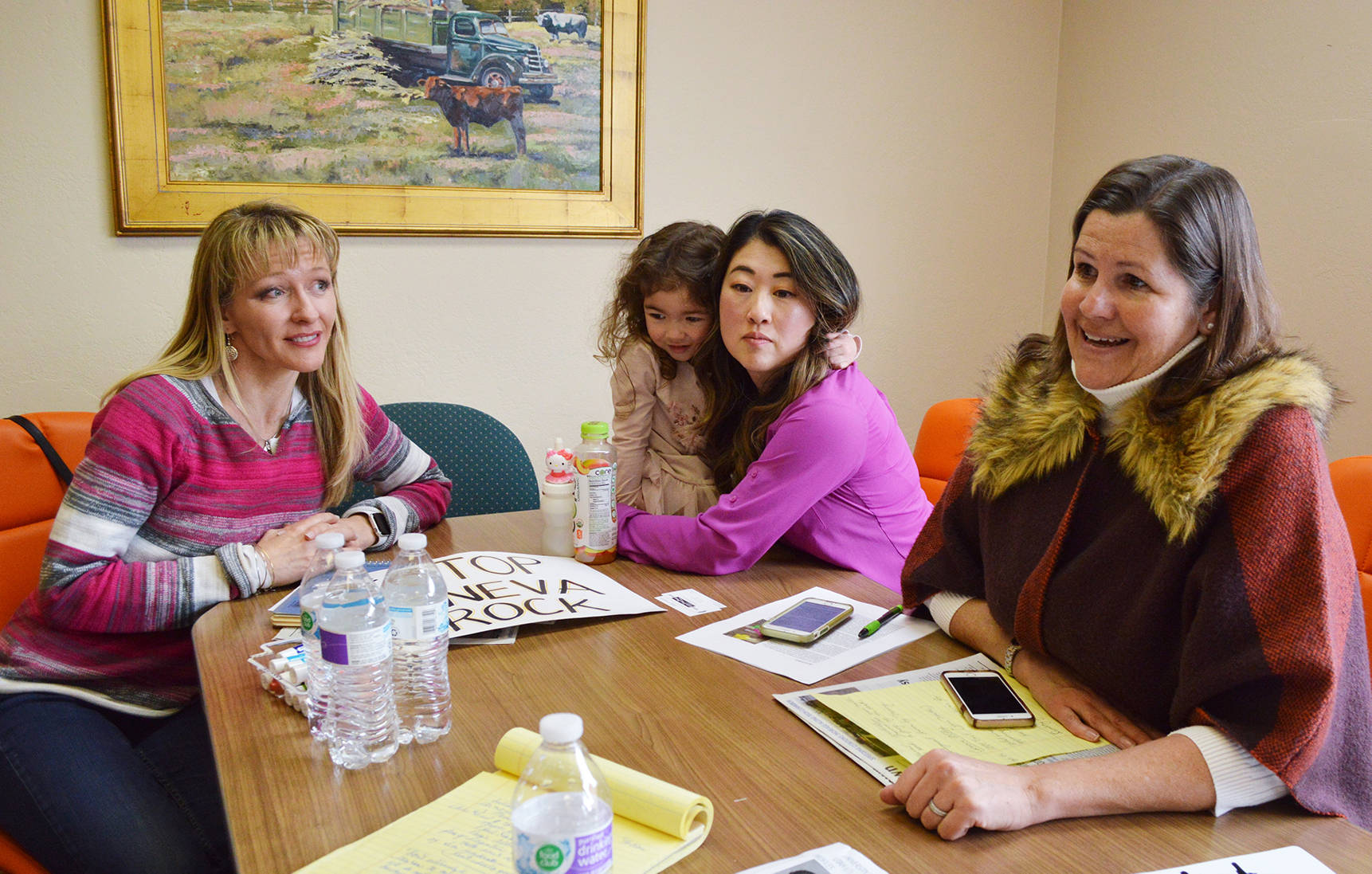 In the wee hours of Monday morning, activists opposed to the mining operations of Geneva Rock in the Traverse Mountain hillside, placed posters on the windows and doors of the Lehi Free Press and city buildings. Some of the posters read, “City of Lehi,” with the word “Lehi” crossed out and Geneva written under it.

Sign on the door of the Lehi Free Press on Monday morning, February 25.

The controversial project developed by Perry Homes has stirred the ire of many residents in Traverse Mountain and the surrounding area. They claim that the dust created by the operation is unhealthy and has serious health implications. “Lehi Moms and Allies for Clean Air” is the group responsible for placing the signs in Lehi in an attempt to call attention to health issues associated with the continued “mining” operation in Traverse Mountain.

Members of the “Lehi Moms and Allies for Clean Air” met with the Lehi Free Press on February 26 to explain their position and give additional information. Kelly Dyches, one of the founders of the group, said, “People have no clue what is happening. People have no idea how Geneva Rock is bulldozing this project through.”

Cherise Udell, an advocate for clean air in Utah, said, “The city is not doing everything they can to make the operation safe.” Angie Parkin added, “We do not want a new mine 50 feet from a family’s backyard. Where does one person’s property rights end and another’s begin? This is a quality of life issue. Why are Geneva Rock’s property rights more important than property rights of homeowners?”

In a prepared statement, the group contends that:

Lehi City continues to endanger the health, safety, and welfare of its residents by allowing mining operation within a residential area where the zoning laws prohibit mining as an allowable activity. The City says that if they call mining by a different name (mass grading) then they are not obligated to regulate activity according to their municipal and development codes.

The statement further points out that development and municipal codes list a litany of documentation and permits that must be on file (even if one assumes that mining is an allowable activity), which it is not. Lehi City does not have any of the requirements on file and refuses to take any action, even action which involves requiring the process of issuing the proper permits. The result is a mining operation which has proven time and time again to blow uncontrolled pollution into the neighborhood and bordering valley.

Lehi City did everything in its power to push this through, often without regard to process, procedure or promises. For example, the Planning Commission took it upon itself to redefine what Health and Safety means (health and safety are defined as happiness and people will be happier with the mining in the long term)

The Planning Commission did attach an environmental study as a precondition to moving forward with this mine. When the Lehi City Council passed the concept plan, Councilmember Johnny Revill confirmed legislative intent that the environmental study would still need to be done. However, the Mayor and City Administrator decided not to enforce this requirement and the plan was approved without it. The Utah Department of Health recommended a study be done before any decisions were made and Lehi City is ignoring this recommendation as well.

The “Lehi Moms and Allies for Clean Air” group plans to continue to advocate for the cessation of the mining operation in Traverse Mountain even if litigation is necessary.