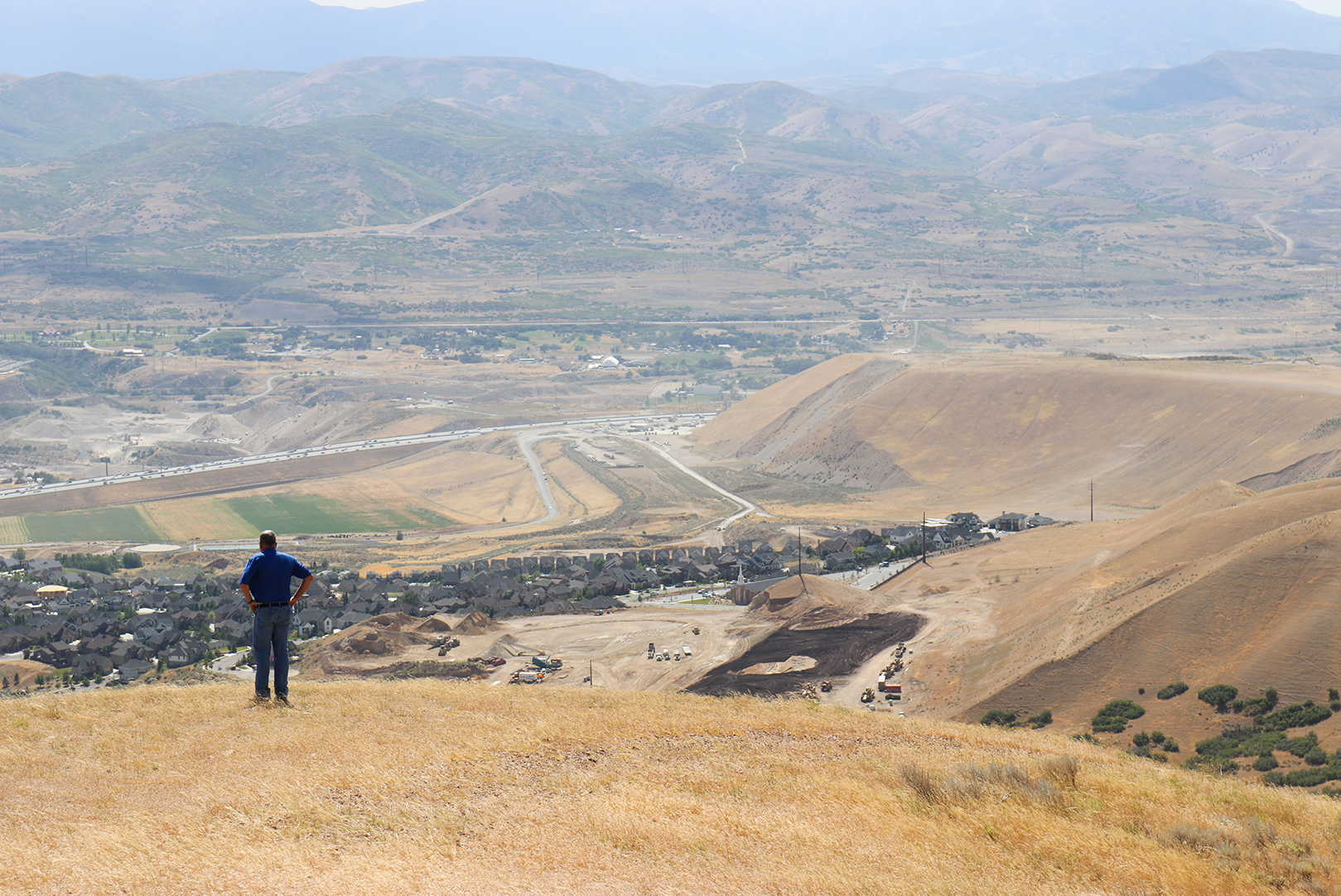 Today, February 15, Lehi City posted on the City website a response letter concerning the mining operation associated with the TMTH Development project in Traverse Mountain. The controversial project is a 38.8-acre development located at approximately Gray Hawk Drive and Ravencrest Lane. The project would require extensive grading and mining. Geneva Rock Products would be responsible for the operation. The following is a historical perspective of the events relating to the project.

On June 8, 2017, Lehi City Planning Commission voted 3-2 in favor of recommending approval of the concept plan after a lengthy and emotionally charged meeting. Commissioner Roger Ellis moved to recommend approval and stated that dust mitigation, re-vegetation, impact on the environment, and other controls should be included as part of the approval. Commissioner Brent Everett suggested that the details of these controls be part of the fugitive dust plan.

On June 27, 2017, Lehi City Council unanimously approved the West Canyon Concept plan for TMTH. Council member Paul Hancock moved for approval with the conditions that there be control over hours of operation, a timeframe for completion, and density shifts in the area plan. A bond would be required by the developer to ensure the school and civic sites would be included.

On July 11, 2017, in a pre-council meeting of the Lehi City Council, Council members Hancock and Condie expressed concern that the City and TMTH enter into a development agreement vote on final approval of the area plan amendment. Their concerns included the $300 payment to the HOA per housing unit moved in the density amendment to the area plan, the proposed school and church sites, dust control, noise, control, and the bond to ensure grading of the school and church sites.

Throughout the next year, studies were conducted by Utah County Health Department, The Utah Division of Air Quality, and the Environmental Epidemiology Program with the Utah Department of Health. Dr. Sam LeFevre reviewed the findings on December 7, 2018. (His findings are included in the City’s response letter.) The research is available at www.lehi-ut.gov/tmth-west-canyon.

Since Lehi City’s discussion on the project, Draper City Council denied Geneva Rock the zoning change to continue grading or mining operation adjacent to the TMTH project. Legislation is now being presented to the Utah State Legislature by representative Logan Wilde (R) Morgan County, to allow this type of mining operation statewide, defining it as “critical infrastructure.”

According to the letter posted by Lehi City, Mayor Mark Johnson was informed by legal counsel that with the absence of site-specific evidence, Lehi City would invite litigation. Johnson said, “I waited as long as possible to sign the development agreement.” His signing of the development agreement has created a firestorm of complaints from residents of Traverse Mountain and other Lehi residents.

The following is the full text of the Letter posted on the Lehi City website today, February 15, 2019.

After more than a year of discussion, on January 16, 2018, the Lehi City Council voted 3-2 in favor of amending the Traverse Mountain Area Plan and approving a development agreement between Traverse Mountain Temporary Holding, LLC (TMTH) and Lehi City.  This project includes residential housing, a park, a school, and a civic facility. Regardless of the council’s decision, the Traverse Mountain Area Plan gives developers a vested right to mass grading. The action taken by the City Council allows for the export of materials related to mass grading.

Following this approval, there has been much concern from residents over the potential health risks associated with fugitive dust and materials disturbed during mass grading operations. As a city, we have spent many hours in consultation with the Utah County Health Department, the Utah Division of Air Quality, and the Environmental Epidemiology Program (EEP) with the Utah Department of Health. Residents can find information associated with this research at www.lehi-ut.gov/tmth-west-canyon.

In an assessment report completed by the EEP dated December 4, 2018, Dr. Sam LeFevre said, “Based on our literature review, the EEP cannot state that exposure to rc-silica is ‘safe.’ Continuing, he says, “However, the literature review, and subsequent modeling of the Point of the Mountain quarry, suggests to us that the exposures to rc-silica originating from the quarry that are experienced by Traverse Mountain residents are transient in nature and well below the levels where observable effects occur.”

In a letter dated December 7, 2018, Dr. LeFevre stated the department’s intent to “begin a comprehensive assessment of the community health risks associated with mining and construction operations at the Point of the Mountain (POM).” Lehi City has officially petitioned the Utah County Health Department to begin this study. They will be launching an air study this spring.

In the same letter, Dr. LeFevre stated, “In light of the uncertainty present in our quick and limited initial assessment, we strongly recommend that any decisions for the POM relying on a health-based assessment be delayed until the more comprehensive study be completed.” Mayor Johnson and Dr. LeFevre have communicated on several occasions to clarify this statement. It is our understanding it was not Dr. LeFevre’s intent to direct the city to reverse the city’s previous approvals for any development or construction activity, including mass grading. Rather, the intent was to state that legislative decisions should not be made based on conjecture but must be supported with site-specific evidence.

Melissa Dimond, Director of the Bureau of Epidemiology, states in an email to Mayor Johnson and the city attorney, dated January 7, 2019, “It is not the Utah Department of Health’s role in situations such as this to request action on the part of the city. Our position is that we have provided a limited assessment of public health concerns regarding (1) exposure and (2) potential health concerns associated to that exposure.” Ms. Dimond continues by stating that while the information presented may not address all health concerns, previous assessments and presentations to the city were accurate.

In the absence of site-specific evidence, it would invite litigation to infringe on the vested property rights of the developer to commence mass grading and construction operations. Mayor Johnson waited as long as possible to sign the development agreement. Ultimately, he was notified that he was required to sign, which he did on February 12, 2019.

As a city, we are sensitive to the potential health risks of current and future development. We will continue to work with the EEP and Utah County Health Department in every way possible. We look forward to initiating the air study and are eager for the results.