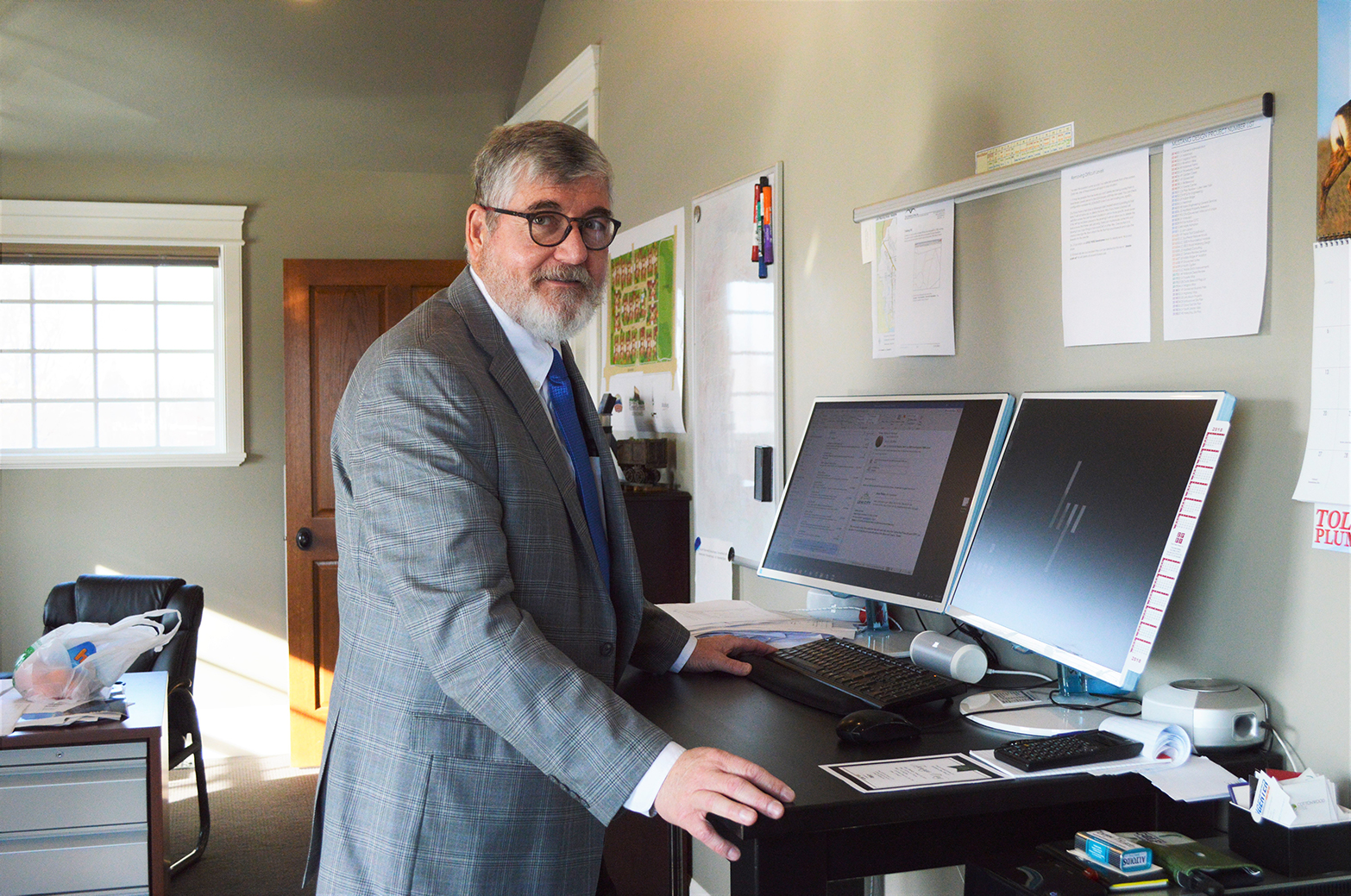 Lehi Free Press: Since becoming Mayor, what do you feel has been your greatest challenge?

Mayor Johnson: I keep talking about growth and transportation. Of course, those issues are intimately related. I always knew that transportation was something that I’d have to spend a lot of time and effort on. I campaigned on that. We’ve put a lot of effort into our master transportation plan revisions. There’s been a lot of engineering time devoted to that.

Also, when I came into office, I got put on a lot of different commissions, like the Point of the Mountain Commission. I got more involved with MAG [Mountainland Association of Governments]. I’ve been involved in several different committees that are looking at the growth in Utah along the Wasatch Front and specifically transportation issues at the Point of the Mountain. Recently, I’ve been put on the Envision Utah board.

All that has fed my concern, and I’ve realized more than ever that we have to address this problem, head on. We can’t ignore it, and we can’t just say stop it. A lot of people say, just stop the growth, stop the development, stop people from coming in. And you can stop it through a moratorium for a very short period of time. But what happens generally with a moratorium is when you come out of the moratorium, it’s sometimes a worse situation.

So, we need to get ahead of it [growth]. We need to make sure we develop wisely and have all the transportation systems in place to deal with it.

Water is another issue that we’re looking at strongly. We’ve done some studies on our irrigation and our culinary water. We know we have water up to a population of about 97,000 right now. We’re actually very fortunate in Lehi to have the appropriate water now. But we have to understand, these future growth projections take us much higher than that 97,000 population. We need to prepare for that way ahead of time.

LFP: When you have a finite resource,  like water and when the state water engineer has said no more well drilling in this area and you’re capturing runoff from American Fork Canyon, what do you do?

MJ: We do have state agencies that have looked at that closely, and they’ve prepared for it. They’ve actually been preparing for it for a long time. I look at Central Utah Water Agency–the pipelines they’ve been able to accumulate. We bring water in now from fairly large distances.

LFP: But even the Colorado River, they’re fighting over those resources.

MJ: Right. And water’s always been a fight and it will continue to be a fight. But we do have agencies that look at ways to pipe that water in and to continue to do that. I’ve actually been surprised when I keep hearing about these different programs that are in process now to make sure that water is brought to the Wasatch Front.

LFP: What do you feel is your greatest accomplishment since you’ve been mayor?

MJ: Besides our work with transportation plans, I’d say going to a five-day workweek has been very helpful for the citizens. I’ve gotten a lot of feedback on that. There’s still some improvement needed on that. It takes some time.

LFP: Did you get a lot of pushback from City employees on that change?

MJ: Some departments jumped right on board because they understood it was a more effective way of serving the community. Some realized that they could stagger their work shifts and actually be more effective. Others wanted to stay on the four-day work week. I like the idea that somebody can come here on Friday and set up an appointment and get some questions answered. I just think it’s really important for the citizens.

LFP: So, it’s provided more flexibility for some of the city employees?

LFP: And there’s no question that the citizens appreciate it.

MJ: Another thing we’re working on is the “one call” program. The idea is that we’re going to have one number that people call to the City, and there’ll be somebody there 24/7 to answer that call and direct those calls where they need to go. Nobody likes an answering machine.

LFP: How’s that coming along?

MJ: It’s going to be in next year’s budget. There’s going to be some costs associated with it. We’ve got to make sure it’s staffed because somebody has to answer those phones, and we have to have a system in place for directing those calls. I’ll give you an example. You might have a situation in your neighborhood, or see something, and you don’t think is appropriate to call 911 and you just want to call the police office, right? It’d be nice to have one number to call for all city services, and they can connect you to the right department.

LFP: Let’s talk about the budget and capital projects in the pipeline. What are the ones the citizens are going to be most interested in, including parks?

MJ: Most of the capital projects are infrastructure improvements like new pipelines, pipeline improvements, road improvements, and street widening. We have some out at Thanksgiving Point we’re looking at right now. Many have to be done and they just haven’t started yet.

Probably the one that people are going to be the most interested in and the most visible will be the Dry Creek Reservoir Park facility. That’s significant.

LFP: Are the people in Highland on board with that?

MJ: So far. Part of the facility is in their city, and they want to have some ownership, but they don’t. It is our reservoir, so the water will be our water.

MJ: Right. It’s critical that we keep that water in Utah County. Water is a problem because we live in the county with the highest birth rate year after year in the entire United States. That catches up to you. A lot of people think the growth we’re experiencing is external. The majority of it is internal, by far. And with our high birth rate, we need to find places for people to live and they’re going to continue to try to find housing here. The problem is that there’s going to be plenty land available out west. If they continue to build out west, then we have to find a way to deal with their traffic. We have to make sure to capture the dollars necessary to do the transportation improvements in our city that deal with outside development. And there’s a lot of it. We’re looking at every option possible to make sure we capture taxpayer dollars to go towards transportation where it’s needed that minimizes the damage in Lehi.

LFP: Any other news on parks?

LFP: Do you feel like that we should’ve given up that property for 10 years to Arsenal Soccer? Some people are not happy about that.

MJ: I know. And some people are happy. We didn’t have the money to build anything there. But now at least grassy fields will be built. We may not have had the money for 5 to 10 years to even start anything there. So right now, they’re funding it [Arsenal]. They’ll build it, they’ll maintain it, which we didn’t have the staff or resources to do. The advantage is we get 30% of the use for City purposes. If we have a large tournament or they have a large tournament, in the agreement we will work together to make sure that those events take place. They have two seasons that last about a month and a half long in the spring and in the fall. In between, there’s a period that we can do events.

LFP: Let’s move to another topic: Public safety. Do we have enough police help?

MJ: We’ve made some adjustments in regards to police protection and compensation. Staying competitive is a problem. There are a number of things playing into that issue. There’s some retirement pressure from the state that started several years ago; some adjustments have to be made there. Also, social media has been terrible–beating up police, and it’s turned a lot of people away from the profession, very unfortunately, because as you know, on social media, a lot of the information is incorrect. It villainizes people in situations. A lot of people who may have had an interest in police protection services just decide to pick a different career.

LFP:  Are we able to be competitive with surrounding communities?

LFP: That leads us to the next question. We have some serious traffic problems in Lehi, with multiple accidents in the same area. Pioneer Crossing for example.

MJ: Yes. Now you might recall we got a lot of pressure from the towns out west wanting the speed limit increased because the people who live out there were protesting. I think the original speed limit was 55 mph, so UDOT came and presented to us when I was on the City Council and wanted the speed limit raised. In my opinion, when you have that many accidents, that many serious injuries, that’s an indication the speed limit’s too high. I’ve actually already been suggesting that the speed limit ought to come down. Now, we’re not going to move as much traffic, so there’s going to be complaints.

LFP: Lehi lost over $9.1 in MAG funds. How do you plan to address traffic issues in problem areas without that financing?

MJ: We’ve spent a lot of our own money trying to finish the traffic analysis. We probably studied 20 to 25 different possible scenarios. We found some solutions for the future. The traffic concerns start happening around 2025, 2030– that’s on Triumph Boulevard. We found some alternate solutions that we can do on Triumph Boulevard, so it will handle more traffic, but it means things like taking the pedestrians off and the bikes off as potential alternatives to add lanes there. We finally ended up with 15 final analyses we presented to Thanksgiving Point because they’re going to be redoing their area plan.

There is no question, when you look at all the scenarios, the traffic that would have been reduced due to the extension of Clubhouse Drive would’ve reduced the traffic better than any other solution. So that is going to remain on our master transportation plan, and I realize there are going to be some neighborhoods that are upset about that. But once again, we have to plan traffic. We just have to. We have to look at every scenario. We have to look at what will work into the future.

LFP: So, you’d describe a future Clubhouse Drive expansion as “most likely?”

MF: I would just simply say that the Clubhouse Drive extension will remain on the city’s master transportation plan for development at some point in the future.

LFP: The City is still revising the general plan, right?

MJ: Yes, the general plan is being worked on That’s going to address a lot of the issues in regards to the growth. We haven’t officially launched a revision of the master transportation plan, but we’re doing work on it right now–and it will be incorporated in the general plan. There are things we have to address with the growth, and we must address transportation along with it. We can’t ignore it.

Public hearing items to be considered by Planning Commission tonight