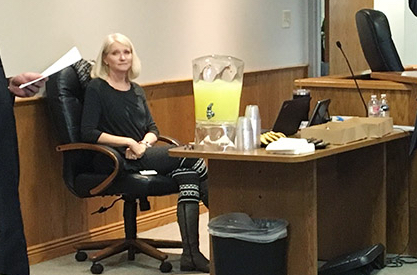 The hour is late. The discussion tedious, but on the northwest corner of Lehi City Council chambers, Marilyn Banasky, Lehi City Recorder, smiles cheerfully as she reminds Mayor Johnson that a discussion item requires a roll call vote. This scene is typical twice each month as city business rolls forward in an organized, congenial, and accommodating manner due in large measure to Banasky’s professionalism.

Banasky has worked for Lehi City for eight years. Her appearance belies the fact that she has four children and is the grandmother of 14. Her duties include overseeing all the records of the City. She is also the director of all the municipal elections as Chief Election Officer. Banasky prepares the City Council agenda, attends all City Council meetings, taking minutes of the proceedings. As records officer she oversees all GRAMA requests. She also conducts much of the research for departments within the City.

When Banasky first came to work for the city she undertook the herculean task of scanning all Lehi City records into a records management system. She is proud of the fact that all records can now be searched and retrieved efficiently and expeditiously. She was also instrumental in transitioning from a paper City Council information packet to a convenient online digital packet. The Mayor as well as the City Council and Planning Commission now can receive their information packets electronically. They can view them and make notations concerning the agenda items on an iPad.

Banasky is quick to point out that transitioning to an electronic packet allows for more transparency. The public can view the entire City Council and Planning Commission informational packets by accessing them on Lehi City’s website.

Lehi City also began live streaming City Council and Planning Commission meetings several years ago, so citizens may view them live or later as they are archived on Lehi City’s website.

Additionally, Banasky ensures that all City Boards and Commissions follow the Open Meeting  Act. All public meetings are posted to the Public Meeting website at least 24 hours prior to the actual meeting time as required by law.

Mayor Mark Johnson commented about Banasky’s work, “Marilyn has impressed me. She keeps herself educated on all new and developing regulations for municipalities and then makes certain we fall in line. She is a very valuable member of the City team.”

City Council member, Paige Albrecht, also commends her work, “I don’t think most people realize just how hard it is to be the City Recorder. Marilyn has so many responsibilities, and she handles them all so well. She really keeps us all in line. Most of the time she just works quietly in the background, but we couldn’t function without her.”

About her position Banasky says, “I feel very fortunate to work for Lehi City. It is a vibrant, growing city that is holding on to its pioneer roots. The Mayor and City Council do a great job juggling growth and keeping the Lehi pioneer spirit alive as well as focusing on making Lehi a family friendly community.”