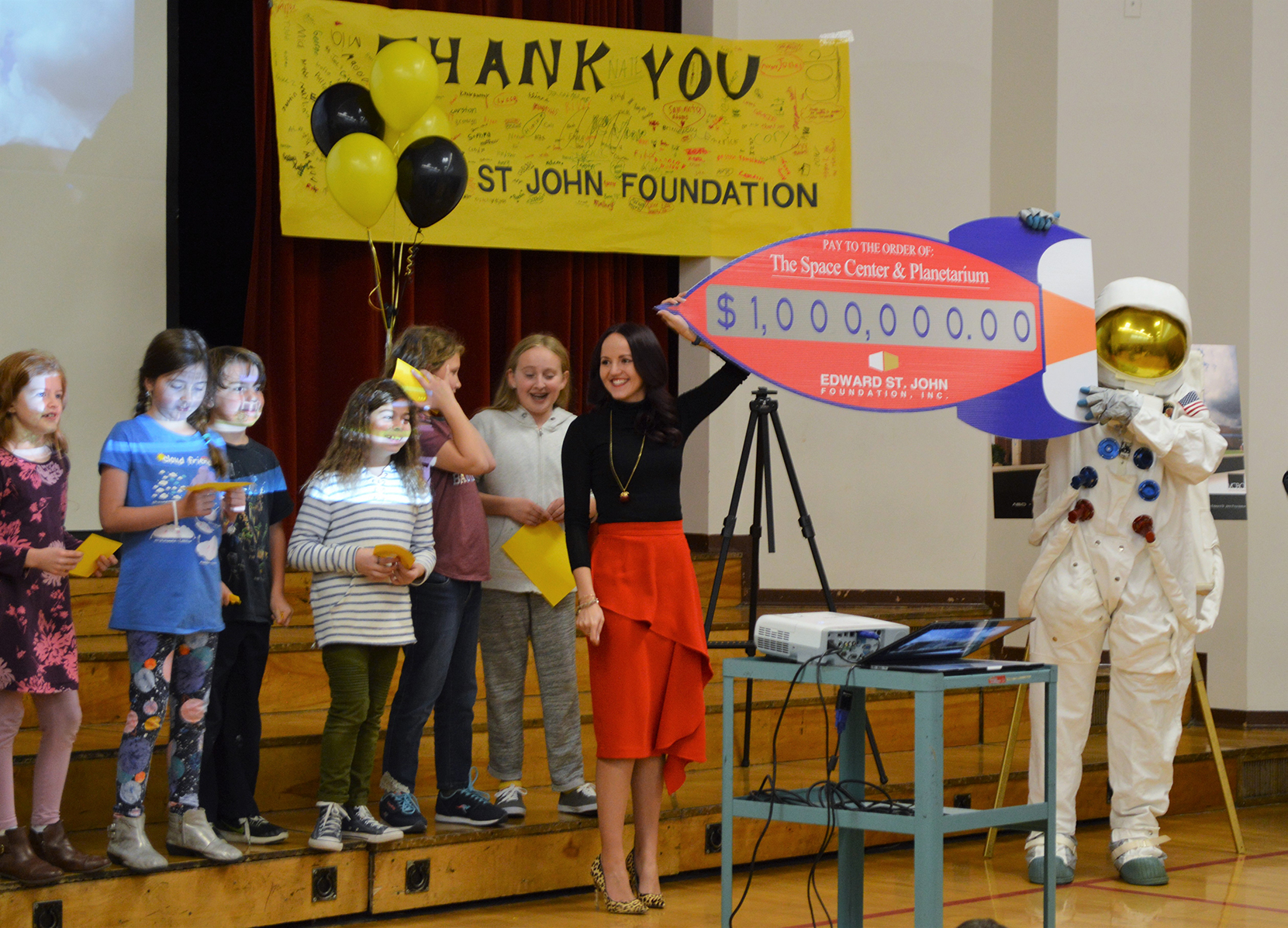 Students at Central Elementary in Pleasant Grove roared with approval during a ceremony on Monday, December 17, in which the Edward St. John Foundation gifted the Christa McAuliffe Space Education Center $1 million.

Daniel Thomas, representing the Edward St. John Foundation, presented the donation by uncovering one decimal place at a time. When the sixth zero was finally uncovered, the students at Central Elementary, where the Space Center is located, cheered loudly enough to be heard down the block. The Christa McAuliffe Space Education Center is known throughout the Alpine School District. Fifth and sixth-grade students all over the district visit the facility on field trips. Students are given missions in one of the three spacecraft simulators. During those missions, the children work together to solve problems using what they know about science, math, and even human nature. In its 20-year history, more than 400,000 students experienced the Christa McAuliffe Space Education Center and thousands more have done space missions just for fun.

“Space is big, it’s immense! I want you to not only dream big, I want you to learn big. Work on hard problems. Most importantly, live big lives – as big as the universe itself,” said Daniel Thomas of the Edward St. John Foundation to the elementary school students. Also, in attendance at the brief ceremony were members of the Alpine School District Board, Alpine School District Foundation, Pleasant Grove City officials, and representatives from state government.

“When I was nine-years-old in July 1969 I went to my Grandpa’s house in Salt Lake City because he had a TV,” Congressman John Curtis told the children. “He set up his black and white TV outside so we could watch Neil Armstrong walk on the moon on the TV and see the moon up above us. How powerful is that?! Science is so important. That’s how we got Neil Armstrong to the moon! I can’t wait to watch what you nine-year-olds do when you’re adults and getting people into outer space.”

The groundbreaking for the Space Center renovation will be in Spring 2019 and should be finished in 2020. The Space Center was chosen for the generous grant from the Edward St. John Foundation because of the hands-on learning environment the Space Center provides. “Our mission is education. The Space Center aligns really well with our mission, especially in science, technology, and engineering,” said Daniel Thomas.