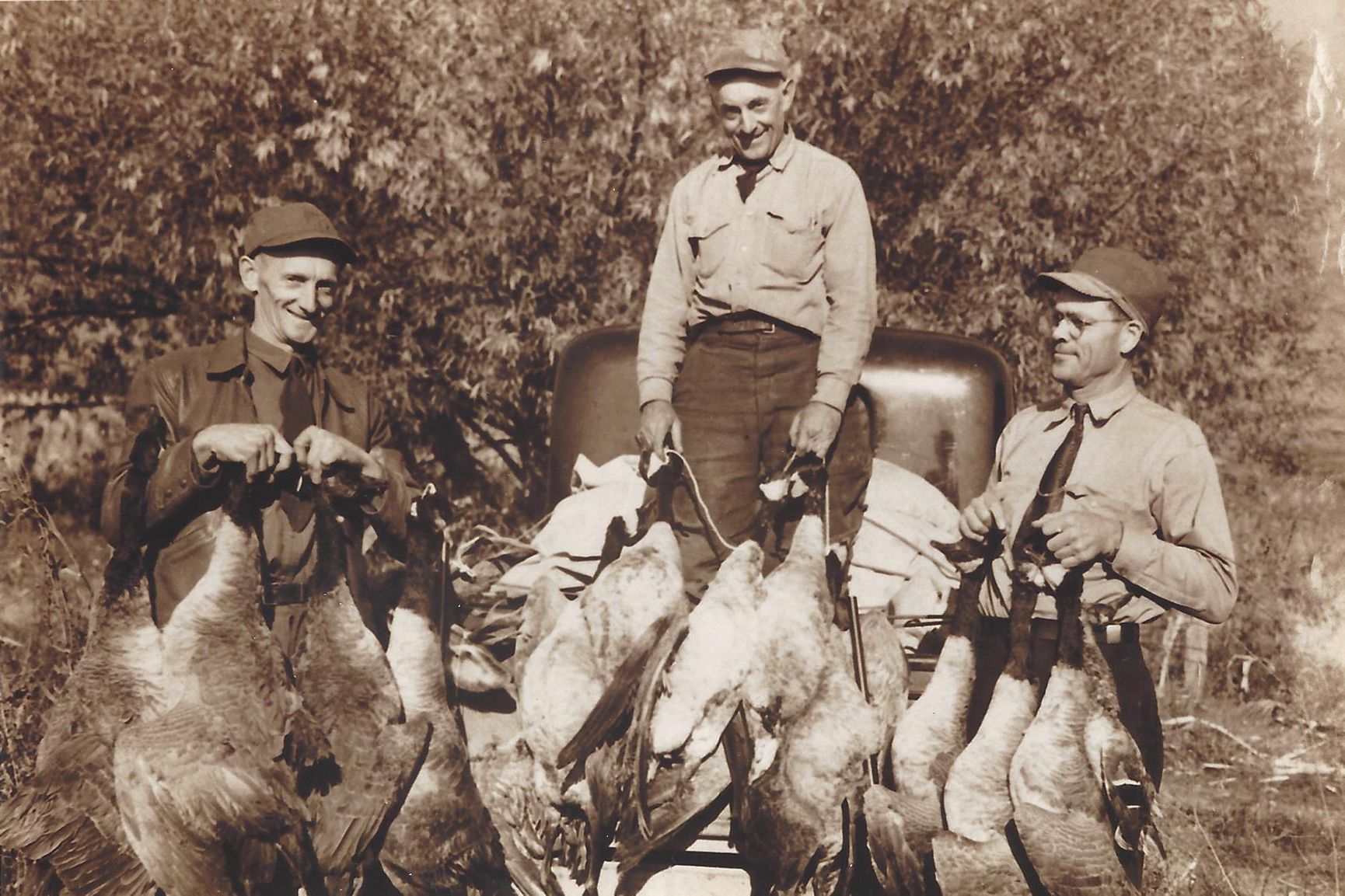 During the Great Depression (1929-1933) holiday meals were different than today’s fare at most tables. It was a rare luxury to have enough bread and butter, vegetables, a meat dish, and a dessert to follow. So, in 1931 my grandmother was hard-pressed to feed eight eager mouths at the Thanksgiving table. The night before the big holiday meal Grandpa Bill came home from work long after dark with three ducks hanging off his leather belt. He had shot them from his bicycle while riding home along the Utah Lake shore just south of his small American Fork home.

With potatoes, carrots, and onions from the root cellar, along with three ducks, a fine meal was prepared for the young, hungry family. The satisfaction of a good Thanksgiving meal was extended with great delight when Grandma produced a delicious carrot cake for her loved ones. She had cracked black walnuts, shredded carrots, minced some raisins, and added a few spices with her meager supply of flour to bake the delicious cake which had a thin but tasty layer of white buttercream frosting.

Now, Christmas was just a few days away and a feeling of desperation began to creep into her heart as she learned that her sister Rebecca and Brother-in-law Steve were going to join them for Christmas Dinner. “How could you invite them to dinner when we don’t have enough food for our own family?” Grandma asked Grandpa hesitantly. “Bill, I hope you can shoot a goose, because Steve doesn’t like wild duck!” she said with firmness. Grandpa didn’t say a word as he departed for his job at his father’s blacksmith shop in Pleasant Grove.

Work had been sporadic with the scarcity of money during the two years since the Depression had started. Grandpa knew his pay envelope for December would be small. His father and three brothers all split proceeds from the income generated by metalwork and horse-shoeing when each month ended. The Laursen boys had not been very busy that December and it was the 22nd of the month. There were just two days until St. Nicholas made his annual flight from the North Pole…and three days until Christmas Dinner.

His 12-gauge shotgun was securely wrapped in its home-made leather scabbard on the back of his bicycle and he had four shells in his pocket. He keenly surveyed the cloudy southern sky as he rode through a light snowfall along the narrow dirt road that bordered the shore of Utah Lake that crisp cold sundown. “A few ducks…but no geese,” he said to himself as he pumped his bicycle slowly down the dirt road. Stopping for several minutes to watch the lake shore, he finally eyed a distant V-formation of Canadian “honkers” flying high over large cottonwood trees westward toward Lehi.

He faintly heard a couple of shotgun blasts from a mile or two away near Saratoga, but the geese were too high for the hunters along the shore. The geese didn’t even break formation as they flew toward the distant Jordan River. He pedaled home with little hope of bagging a goose for Christmas dinner. The family had complained that they were tired of picking ducks and pin-feathers and eating the wild meat. Betty Ann, age eleven, told her dad she did not want to pick any more duck feathers and didn’t want “one more bite of duck meat.”  The delicious main dish of moist venison had long since disappeared after the fall deer hunt when Grandpa Bill had shot a nice buck to supply meat for the family for several weeks. Even the bottled venison was now gone, and the “hundred pound” sack of flour was down to just a few scoops.

He figured that his Christmas pay would be no more than fifteen dollars. Not enough to even make the mortgage payment. When he arrived home, he parked his bike at the side of the house and touched the four shotgun shells in his pocket as he lifted the gun from its sheath and entered the warm Christmas home. His sister-in-law, Annie Snider Laursen, had given the family two strands of brightly colored fruit shaped Christmas lights a few years earlier and Johnny had retrieved them from the attic. The children squealed with unbridled joy when Grandma plugged them into the wall and they lit up the room in a red, orange, yellow, and green holiday glow.

The evening was spent singing Christmas songs around the tree while eating cooked carrots, potatoes, and piles of buttered toast. The true spirit of the season enveloped the little home and laughter filled grandpa’s weary heart.  “We are nearly out of flour” Grandma Lulu whispered to Grandpa. “I know dear,” he replied. “I should get paid tomorrow.”  But he needed to shoot a goose for the Christmas table. On his way to work the next day, he left early to hunt the lake shore at dawn. The air was so cold, tears ran from his eyes and froze on his cheeks. With blurred vision, he searched the skies for geese. There were none. That night he rode the cold shoreline again with no luck.

On Christmas Eve, he left work early after getting his wages in a small brown envelope. It contained $16.43 in cash. Sixteen dollars and forty-three cents for one month’s work. He rode the shoreline for two hours that afternoon looking for any sign of geese Again, there were none. That night, Santa left some carefully and skillfully made wool stockings for the three boys. All crafted by Santa’s hard-working elves. The three girls each got blouses and a pair of beautiful blue stockings.

After the early morning happiness of Santa’s humble visit, grandpa bundled up and headed out in a heavy snow-storm, pedaling for the lake shore. He arrived near Chipman’s cornfield and stopped the bike when he heard a familiar noise. The distinct “ha-onk! ha-onk! ha-onk!” of nearby geese signaled a formation of  “honkers” flying low near the field. He scarcely had a moment to slip off his bike, grab his gun and roll into the bushy ditch bordering the field when a large flock of Canada Geese whistled overhead through the snow. He only had time to put two shells into his gun before they were directly above him. He jumped up and fired a shot directly at the lead goose. He saw it wobble…then stabilize its flight. He aimed at another goose at the back of the formation slowly disappearing into the falling snow and fired again! The flock was gone! He heard them “honk” loudly as they blended into the clouds and snow flying somewhere toward the lake.

He walked slowly through the stubble of the cornfield in the direction the flock had disappeared. Suddenly, a large goose appeared through the ankle-deep snow on the ground thirty yards ahead.  It flopped slowly then was still. “Hooooray!”  He uttered a brief shout of joy. Then, just beyond the first goose, another big bird flopped slowly, then fell over still. Two shots! Two geese!

His bike ride home was the happiest he had experienced in months. Prayers of gratitude were offered and two delicious geese were consumed that afternoon as grandpa recited the details of his successful goose hunt to eager little faces surrounding the delicious Christmas Dinner table that memorable day in 1929.