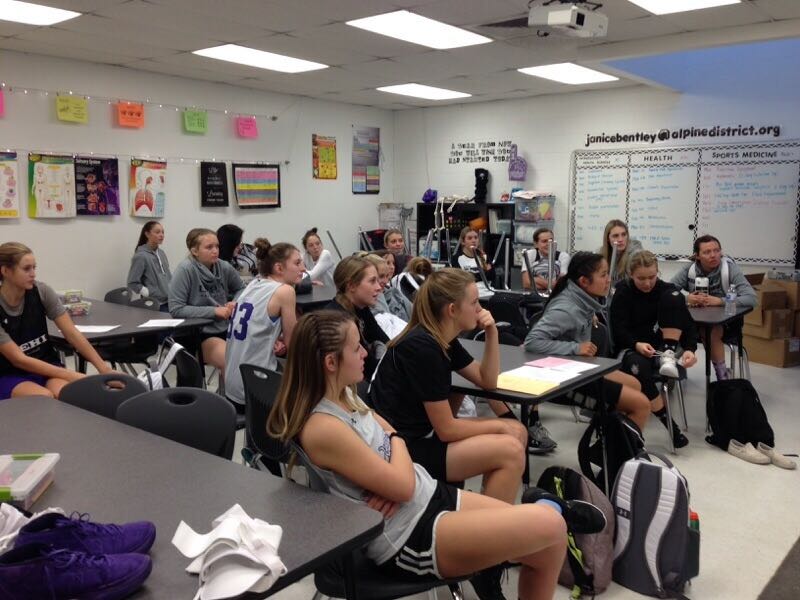 With only two pre-season games played, Lehi High School girls basketball team is raising eyebrows around the state. Their first game was against Lone Peak. With a balanced offense, the Lady Pioneers downed the Lady Knights 65-59. Lehi center, Sarah Christopherson was unstoppable underneath. Later in the week, the team played Bear River and walloped them 62-39.

In an interview with Lehi head coach Aubrey Van Pelt, she downplayed the ranking. “We don’t think about rankings,” said Van Pelt. She graduated from Timpanogos High School and played college ball at UVU and then at Utah State. This is Van Pelt’s third year as head coach at Lehi.

In the pre-scrimmage talk to the lady Pioneers, Van Pelt emphasized what it means to be “tough.” She gave several examples of NBA players and how they play. All NBA players have certain characteristics. “Kevin Garnett is always talking. He can talk the opposition into missing shots and teammates into making shots,” encouraged Van Pelt.  She questioned the girls about what characteristics good teams have. The players responded:

“Teammates must help each other up. “If a player goes down, I want all hands helping them up,” Van Pelt emphasized.

In preparation for this week’s games she told all girls to eat breakfast, get sleep and take care of themselves.

“We have a cool culture here. We focus on getting better and we trust the process. We will fail. At the end of the talk the girls all chanted in unison, “Tough Together.”