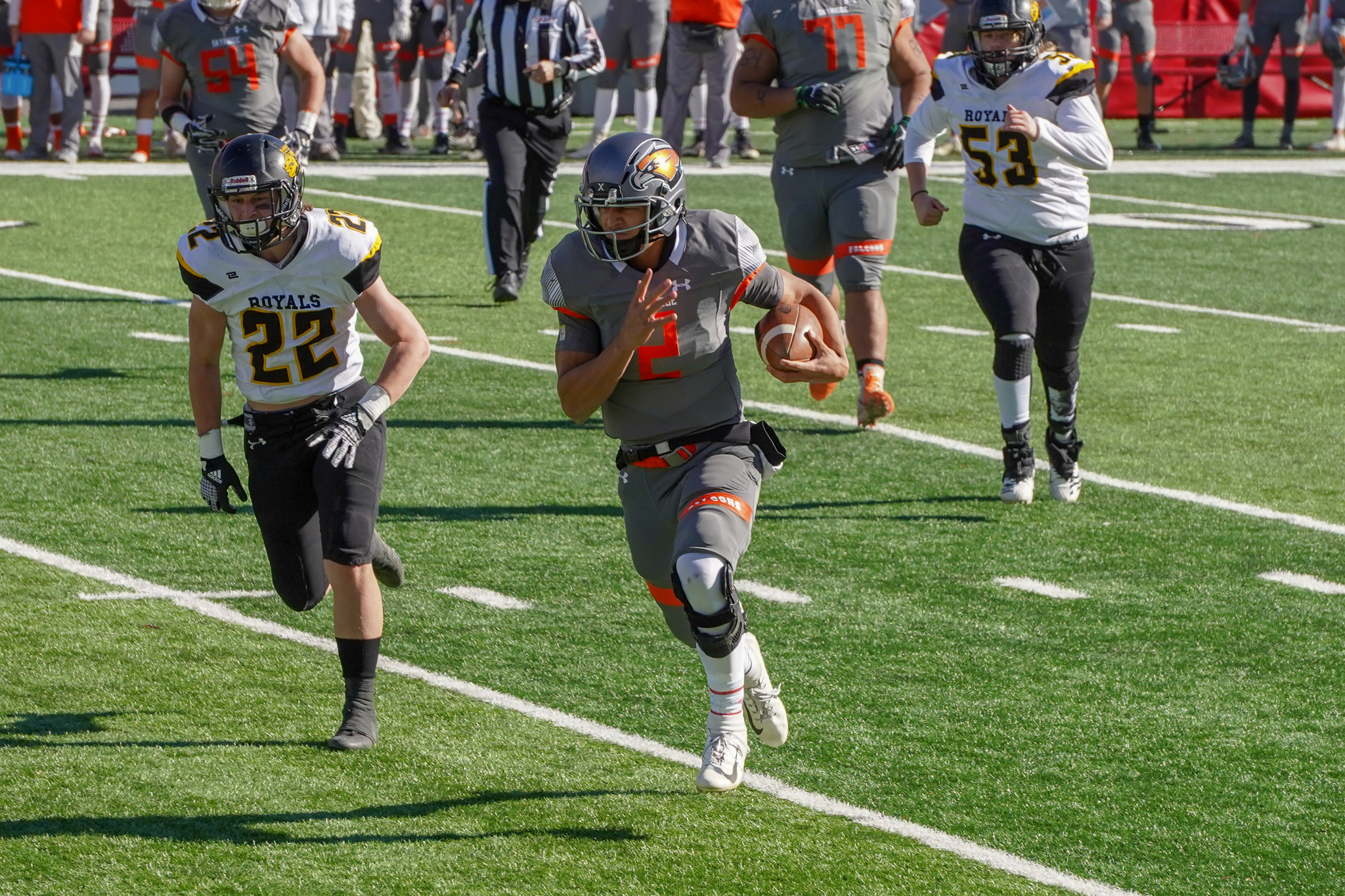 On Friday, November 9, the Falcons took on the Roy Royals in an exciting and fervent game. The Falcons did not disappoint as they played with intensity and dominated the Royals in the first half of the game.The Falcons out-gained Roy 259 to 90 in total offense. Quarterback, Jayden Clemons had a 37-yard run for a first down in the second offensive drive of the game. Clemons ran the ball for 17 more yards to put the Falcons in good field position. Ma’a Notoa took advantage of that field position and ran the ball 8-yards for a touchdown. Connor Harris completed the PAT and the Falcons were ahead 7-0.

The Falcons had a balanced attack of rushing and passing, gaining 152 passing yards and 107 rushing yards. The Royals defense looked strong in the first quarter, but the high-powered Falcon offense pulled away in the second quarter. The Royals’ rushing attack was flat, and they ended with -18 rushing yards in the first half.
The Falcon defense also overpowered the Royals. Ioholani Raass started off the defense with a strip sack recovered by Stone Mulitalo. This play sparked the Falcon defense for the entire game.

The Royals worked hard in the second half, scoring a touchdown with a two-point conversion, then forcing a Falcon fumble and a turnover on downs. The Falcon defense responded with intensity and forced turnovers on downs to maintain the lead.

The Falcon offense had many key players that led to their points on the board. James Palmer played strong offensively with four catches, 68 yards, and a touchdown. Ty Arrington had three catches for 46 yards and a touchdown.
Clemons was 12 – 21 with 195 yards and two touchdowns. He ended the game with 21 carries for 126 yards and one touchdown. Notoa had 13 carries, 44 yards, and two rushing touchdowns. He also helped in the passing game with a 45-yard catch on a key third down. The crowd was in awe as they watched Notoa hurdle one Royals would-be tackler who tried to go low, then forearm shivered the remaining tackler into two other Roy defenders before diving into the end zone. Clemons’ physicality and mental toughness helped lead the Falcons to victory. Blayden Togiai was a dominant force for the Falcon defense with a pick six. The teamwork on both sides of the ball fueled the whole team to perform at their best.

Skyridge Head Coach, Jon Lehman said, ” It just takes a belief in each other. Things are going to happen, you’re going to get pushed in games and you have to trust the game plan and you have to keep playing and keep executing.” The Falcons had near perfect execution as they played hard and well the entire game. Lehman also said, “We had a good week of preparation. The team focused and worked together. Assistant Coach Lira worked hard on our game plan and strategy.” The Falcon’s strategy and play-calling was key in their offensive domination and their response on defense shut down the Royals’ ability to make big plays.

Falcon safety, Jaxon Peck attributed the win to, “A hard week of practice. The team’s energy helped us to win.”
Falcon receiver Arrington said, “We play for each other. We trust each other on the field.” This sense of accountability to the team and the level of trust is a factor in the Falcons’ 11-game win streak.

The Falcons focus and teamwork earned a 42-15 victory over the Royals. The win advances Skyridge to the 5A State Championship game for the second straight year. Lehman said, “I’m thrilled to see his team get to this point.”
The Falcons will take on Corner Canyon in the 5A State Championship game which is scheduled for kickoff at 6:30 p.m. on Friday, November 16, at Rice Eccles Stadium.

Skyridge football player #32 Ma’o Natoa dives for a touchdown. I Riley Livingston
Related Topics:#lehinewsboysfootballfootballfootballpassfootballplayerslehifootballlehifreepresslehisportsskyridgefootballstatesemifinalstakestatetouchdown
Up Next