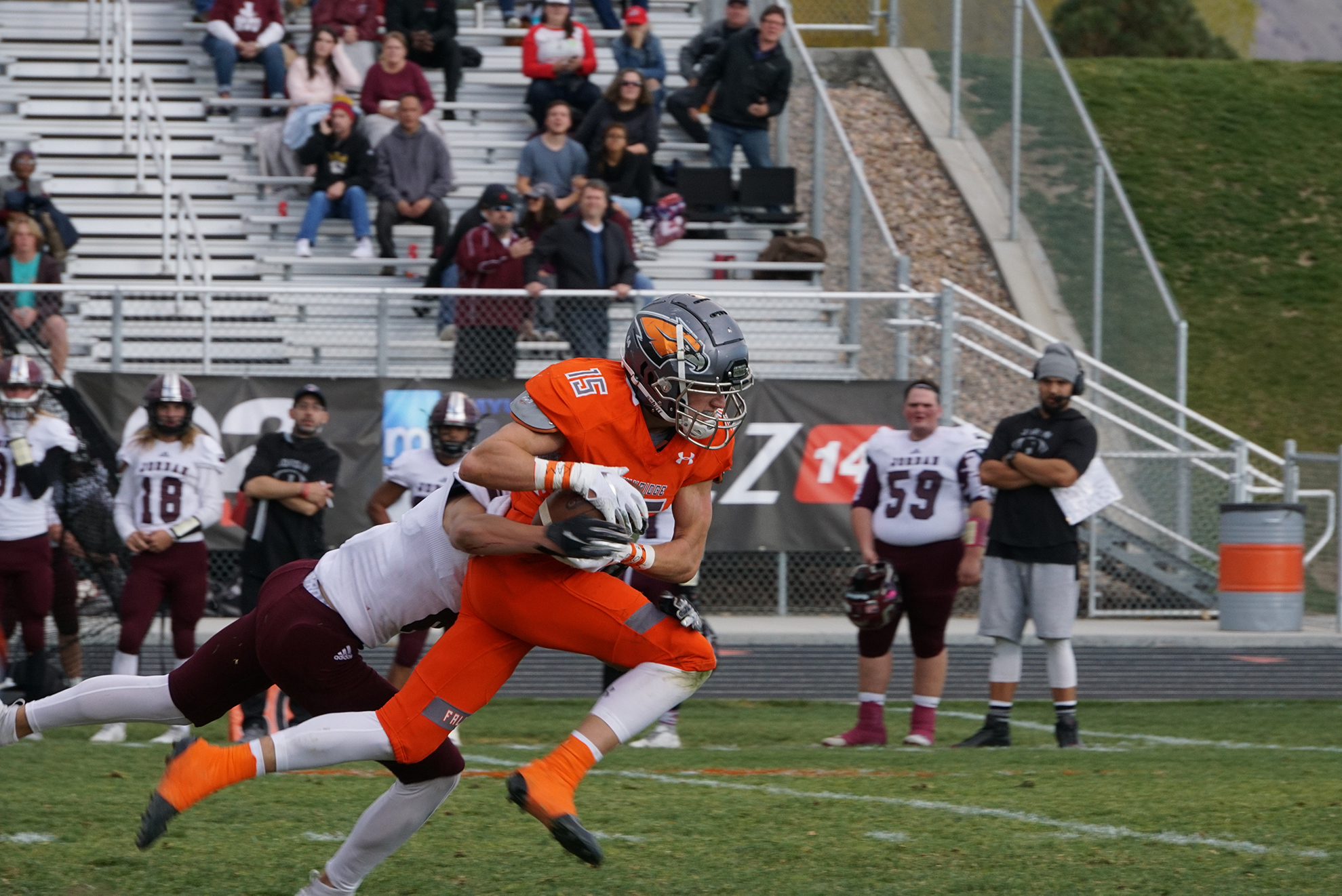 It was a rough start for the Skyridge Falcons as they took on the Jordan Beetdiggers in the 5A state quarterfinal playoff game last week. The difficulty started early for the Falcons as they drove the ball down the field and the surprise punt on a fourth down by quarterback, Jayden Clemons was unsuccessful. This resulted in good field position for the Beetdiggers. They grabbed the opportunity to score with running back, Jake Shaver on a 23-yard run. The scoreboard lit up with 0-7 lead for the Beetdiggers.

Jordan maintained their control as Shaver scored again on an 84-yard run. The score was now 0-14. The Beetdiggers continued dominating the Falcons with a pick six by Wyatt Jones and just like that the score was 0-21 at the start of the second quarter.

The Falcons gained some momentum when Ty Arrington completed a 22-yard pass from Clemons. The Falcons were now in good field position offensively and their momentum gained with a 29-yard Clemons to Nathan Upham touchdown strike. Kicker, Connor Harris completed the PAT and the Falcons were on the scoreboard with seven points. The Falcon Brotherhood gained strength as defensive end, Stone Mulitalo recovered a botched snap by the Beetdiggers and rumbled 40 yards for the second Falcon score. The fumble recovery was a pivotal moment for the Falcons and their momentum escalated from that point. Their momentum didn’t dissipate even with a second pick six by Beetdigger Jones.

Ma’a Notoa played for the love of his team and became a dominant force on the field with a 35-yard kick-off return run. The strength of the Falcons continued as Clemons connected with Dylan Samuels on a 45-yard, over the shoulder catch. That play led to a Notoa 3-yard touchdown run. The Beetdiggers fought back and blocked the PAT. Falcon kicker, Harris scored later with a 32-yard field goal. The score was 23-27 at half-time.

After the half, the Falcons returned to the field with a new energy and strength. Notoa contributed heavily to the 35 straight second-half points put up by the Falcons as they beat down the Beetdiggers with a final score of 58-34.

Notoa ended the game with 30 carries for 189 yards rushing and three touchdowns; he also had two receptions for 52 yards. “He (Notoa) is a confident player. He always believes. He never gets down on himself or anybody else. The best running back in the state, hands down” said Skyridge Head Coach, Jon Lehman.

Quarterback Clemons ended the game with 221 yards passing, 109 yards rushing and 4 total touchdowns (2 passing and 2 rushing). Clemons’ leadership and poise on the field after two interceptions returned for touchdowns was a factor in the Falcon domination.

Lehman said, “Jayden responded when we were down with confidence in the team and in himself.”

Blayden Togiai ended the game with 13 total tackles and three tackles for loss. His defense was a key in the Falcon comeback.

In the end, it was the united brotherhood of the Falcons that won the game. To rally and win from a 21-point deficient is what the playoffs are about and is what builds champions. The Falcons fought hard and did all that they could to not let each other down. Lehman said, “We continued to play and believe in each other. It took everything in us, our fight and our execution to come back and win this game.”

Skyridge will continue on in the tournament Friday, November 9 as they take on Roy in the state semi-finals at Rice Eccles Stadium.