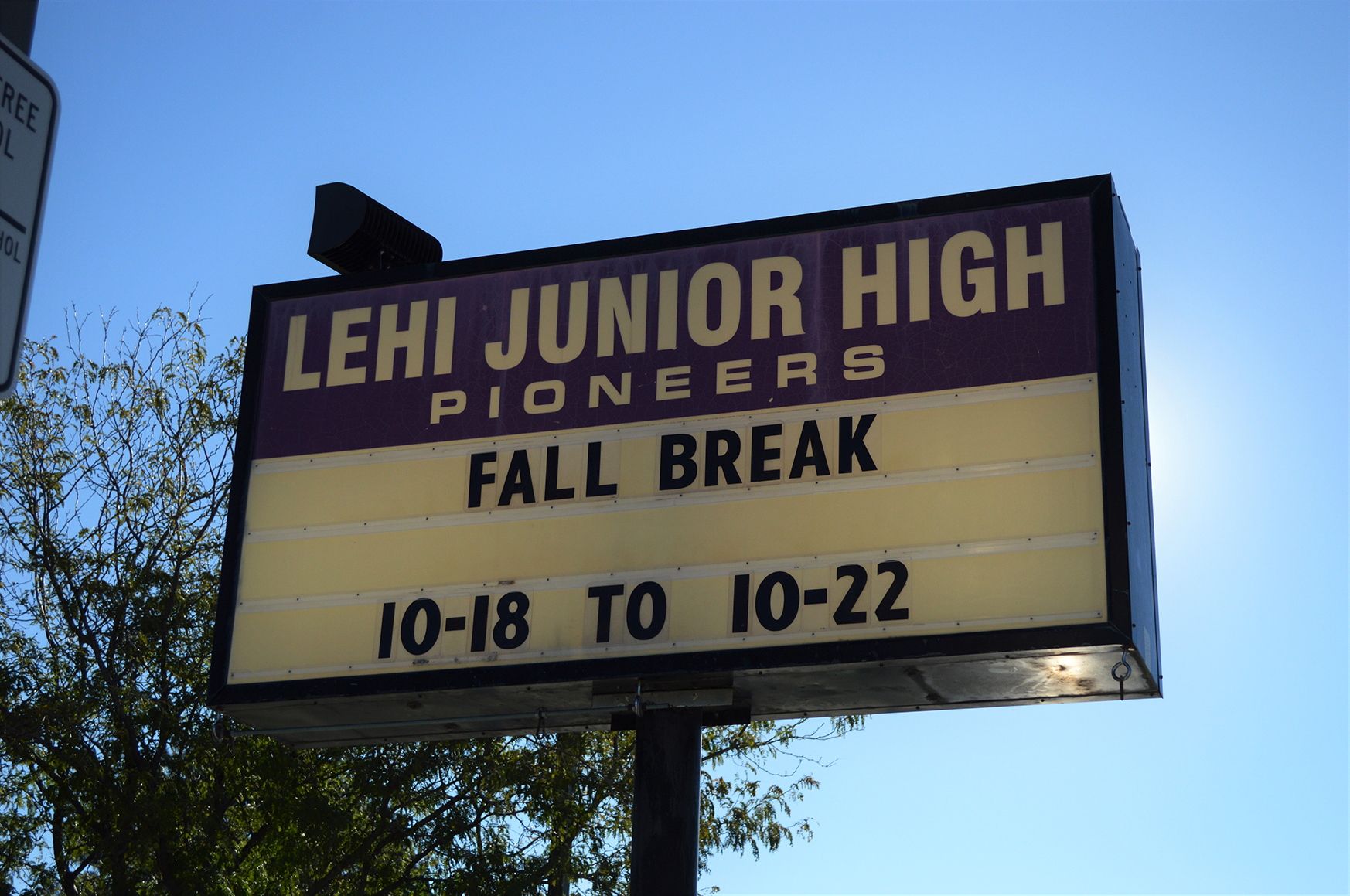 For the last three years, students at Lehi Junior High School have been moving on to Skyridge High School, and the talk of changing the LJHS colors of purple and white along with the Pioneer mascot coinciding with Lehi High School, has reached a fever pitch.

“I had a feeling people would want to make a change when we went from feeding into Lehi High School to Skyridge High School, but I waited until students and parents brought it up,” said Kevin Thomas, Principal of Lehi Junior High. A survey was sent out to the parents of current students at LJHS, as well as the elementary schools feeding into LJHS, asking if they would support a change of mascot and colors. The initial response was overwhelmingly in favor of a change. When the survey showed up on Facebook though, those for the change and those against the change started evening out.

One of the biggest concerns with rebranding Lehi Junior High has been the cost. The marquee would have to be replaced, along with a few other signs outside and inside, as well as the purple paint adorning the water tower and other walls. The money would be taken from the capital outlay for the school, money earmarked for maintenance, repairs, or upgrades LJHS needs. “The school is old and there are so many projects we could spend money on,” said Stacy Bateman, PTA President for Lehi Junior High. “We desperately need a new auditorium, the gym floor needs to be repaired, we need new tennis courts, skylights to bring in more natural light – the list is very long.”

Lehi Junior High and Lehi High School started out as one school, created in 1908. The first mascot was the Wolverine and the school colors were blue and white. In 1912 the colors were changed to purple and white, but it wasn’t until 1925 that the mascot was changed to the Pelicans, because reporters in Salt Lake City felt a wolverine was too ferocious and violent to be a high school mascot. In 1934-35, the student body of Lehi High School voted to change the mascot to a Pioneer, an image symbolic of Lehi’s pioneer heritage. Even after the two schools separated, they continued to share colors and the Pioneers mascot.

The culture at LJHS is built around the house system, as taught at the Ron Clark Academy, and their motto: We Are One. The word “one” is part of the word “pioneers,” a fact the school takes advantage of in encouraging students to connect with each other in assemblies and other school functions. “I appreciate the feeling of wanting a new identity, separate from Lehi High School, but I think we could have rebranded the Pioneers mascot into a more modern take and just change the colors. It doesn’t have to exclusively mean pioneers who crossed the plains. Lehi is still a pioneer in the tech and business world. A pioneer could be the first person in their family to go to college,” said Bateman. “We have a rich history as Pioneers. We are doing the students a disservice by not considering those who came before us.”

A committee consisting of parents, principals, members of the Lehi City Council, and some students reviewed the results of the survey and decided that it is time for a change at Lehi Junior High. “The committee determined that there needs to be an increased connection to the mascot as a whole,” said Principal Thomas. In talking with other schools who have made changes like this, Thomas discovered it’s not made because of a majority vote, but the committee makes the final decision. It’s impossible to make everyone happy. Over the next several weeks, the committee will consider the suggestions for mascot and colors that were submitted as part of the original survey. “We’re going to move away from purple and orange altogether, we want to have a singular identity,” explained Thomas. There are 12 junior high schools in the Alpine School District and one more set to be built in Lehi for the 2021 school year, so the committee will have a challenge not to duplicate any mascot and color combinations that already exist. They know for sure though, they won’t be using the name of a baby falcon, an eyass, to go along with the Skyridge Falcons. The committee will narrow down the mascot and color options from the hundreds of suggestions on the survey, then the students at LJHS will choose from the top three. The new mascot and colors for Lehi Junior High will be announced before the 2018-2019 school year ends.

“With change comes consternation. I’ve been back and forth on this decision, but ultimately change creates opportunity and I think we can make this a positive thing,” said Principal Thomas.