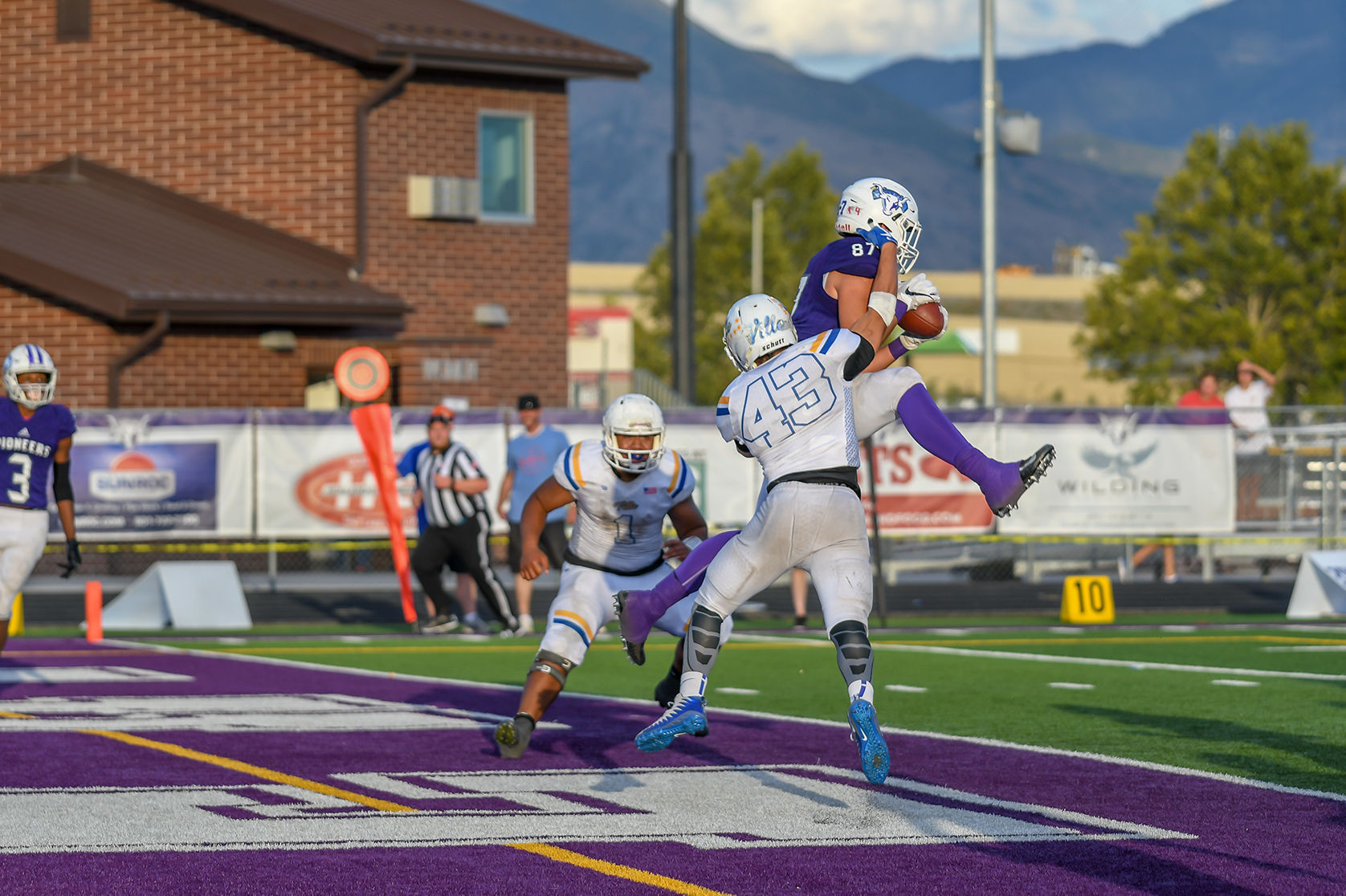 After losing their opening game, the Lehi football team bounced back in impressive fashion against Taylorsville at home on Friday night. The Pioneers dominated the contest, outplaying the Warriors in every phase of the game on the way to a 37-6 victory.

The Pioneers scored early and often. After receiving the opening kickoff, the offense marched down the field. Quarterback Hayden Betts scored the first touchdown on a short keeper. On the next drive, Betts threw a 7-yard touchdown pass over the middle to tight end Trey Andersen. The Pioneers were up 14-0 at the end of the first quarter. Early in the second quarter, Betts connected with wide receiver Gentry Cox in the flat for a 4-yard touchdown. Lehi’s next points came on a safety when the Warrior’s long snapper put the ball over the punter’s head and a group of Pioneers forced the punter out of the back of the end zone. On the following possession, Carsen Manookin outran a defender to the pylon for a 5-yard touchdown, putting Lehi up 30-0 at the half. In the third quarter, Betts hit Gentry Cox for a 16-yard touchdown. Kicker Conner Stewart was 4/4 on PAT attempts.

The Pioneer offense gained a total of 300 yards. Starting quarterback Hayden Betts had a strong performance completing 14 of 18 pass attempts for 195 yards and running three times for 25 yards. The offensive line provided excellent protection for Betts throughout the game. Seven receivers caught passes from Betts and from sophomore Creyton Cooper, who played much of the second half. Tight end Trey Andersen had 4 receptions for 68 yards, including one touchdown. Jaden Greenwood caught 3 passes for 64 yards. Gentry Cox had 3 catches for 29 yards, including two touchdowns. Carsen Manookin had 63 all-purpose yards. McKay Wall had a good night returning kicks, with a 37-yard punt return and a 27-yard kickoff return.

Carsen Manookin runs past a diving Taylorsville defender to score a touchdown, putting Lehi up 30-0 late in the first half. | Douglas James

The Lehi defense also had a fantastic performance, shutting out Taylorsville until the final play of the game. The Pioneer defensive line and linebackers kept Warrior quarterback Dane Leituala in check. This was no small task, literally. Last season, the 5’11”, 225-pound Leituala averaged 11.1 yards per run while accumulating over 1700 yards on the ground and 2481 yards through the air. Lehi’s defense had two takeaways during the game. Defensive back Oakley Krumvieda intercepted a pass near midfield and ran the ball to the 2-yard line and defensive lineman Miles Wilcox recovered a fumble. Some of the other standouts on defense were Jacob Vasquez, Tyler Ehat and Gage Kent.

The season continues this Friday when Lehi travels to take on traditional rival American Fork. The non-region game begins at 7 p.m. The Cavemen are 1-1 on the season. They defeated Weber 38-15 on the road and lost to Timpview 33-25 at home last week. In the current statewide rankings, the Pioneers are #20 and the Cavemen are #10.