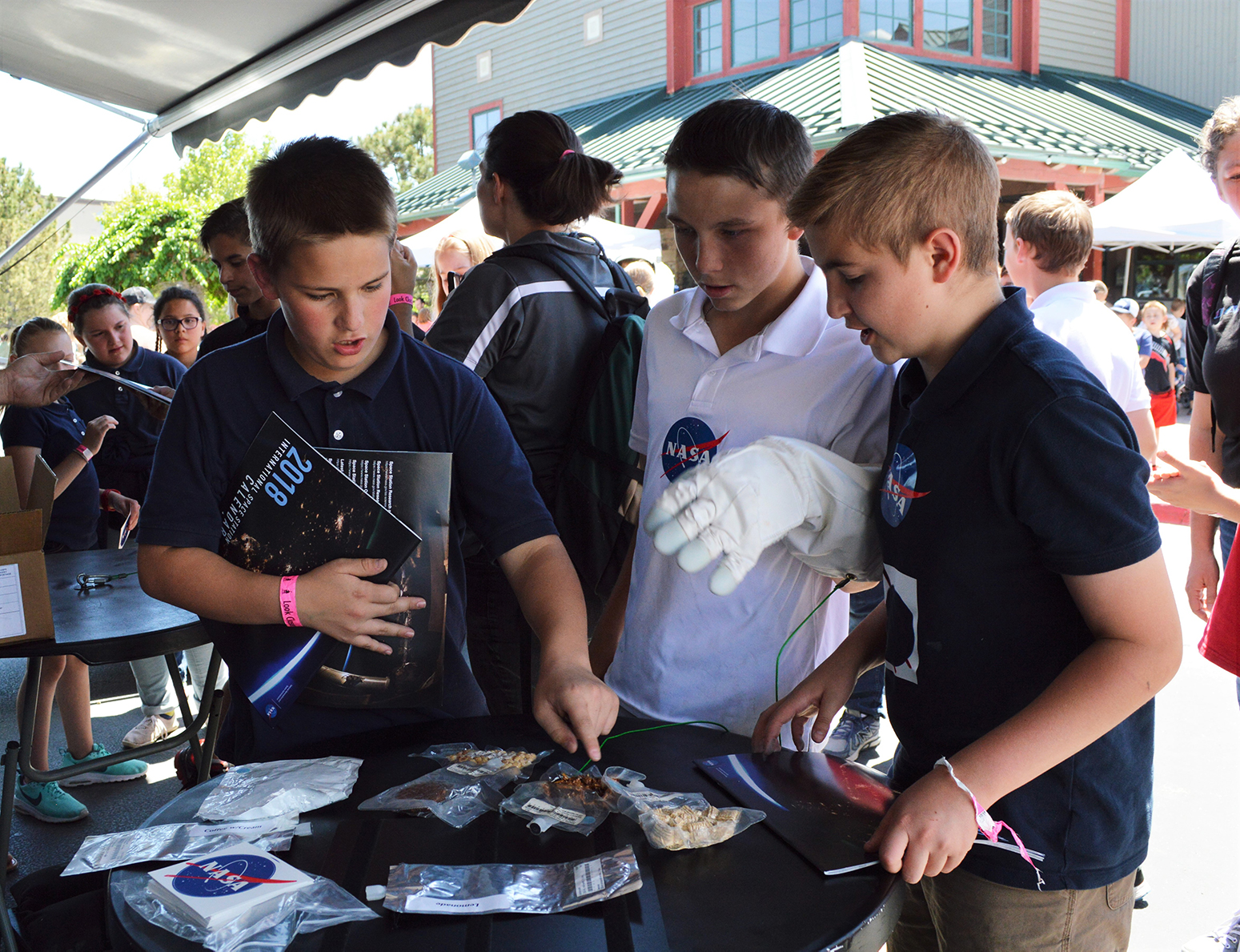 The NASA Mobile Destination Station came to Thanksgiving Point last Thursday, May 17, giving future space explorers a chance to see what it’s like to be inside a real space station. They brought along moon rocks and gear for kids to examine and try out as well. Astronaut Randy “Komrade” Bresnik gave a presentation about his experiences on the International Space Station and answered questions from many of the curious children attending the event.

Bresnik told his audience that he never thought he would be an astronaut while growing up in Santa Monica, California. He worked hard in school and became an F-18 pilot in the Marine Corp and even piloted a Goodyear Blimp. Bresnik flew his first space shuttle, the Atlantis, in 2009. He lived and worked at the International Space Station with five other astronauts from all over the world from July 28 to December 14, 2017.

To replicate the extreme conditions in space, astronauts spend time in cold, dark places here on earth. Bresnik’s team spent a few weeks living in an underground cavern in Italy where it was dark all the time, as well as cold. They also lived underwater in a ship the size of a school bus off the coast of Florida to get used to being weightless in space. As part of their training, the astronauts were also dropped from a plane into a forest in Russia and had to use what they had with them to make a camp for several days. The men used their parachutes to make a teepee in the -15-degree environment.

Kids could get a photo of themselves in a real space suit at the NASA Thanksgiving Point event. | Nicole Kunze

“We had to train to be ready for anything on the space station,” said Bresnik. “Just like you have fire drills at school, we had to train for different situations. We did space walk training so that we could fix things on the outside of the space station. We go underwater and practice in the space station replica in the largest swimming pool in the world – it holds six million gallons of water.” The astronauts had to work on anchoring their tools, or the tools would just float away.

“We’re up there to do work – scientific work. It’s the only micro-gravity, weightless laboratory, so we’re doing all kinds of experiments. It could be chemistry, fluid sciences or combustion sciences. We have mice up there to see the effects of weightlessness on bones. We’re even doing cancer research on lung tissue,” explained Bresnik. The astronauts need to work out for two hours a day or they lose bone density in the weightless environment. They take advantage of being able to use the floor, ceiling, and walls to work out on treadmills and at weight benches in the same small space. No matter what they’re using to work out, the astronauts must anchor themselves to the machines with bungee cords.

Bresnik and the other astronauts could contact their families via computer any time. They even got care packages from home. Bresnik’s seven-year-old son sent him a fidget spinner for his birthday and Bresnik made a fun, short video of a fidget spinner in space that delighted the young Thanksgiving Point audience.

During his time at the International Space Station, Bresnik witnessed incredible sights from 250 miles above the earth. The earth spins 6 miles per second and the sun would rise and set 16 times a day. Bresnik saw the solar eclipse from the space station, as well as northern and southern aurora lights, hurricanes, wild fires, volcanoes, Mount Everest, lightning storms, and beautiful city lights. Bresnik had a photo of stars so dense it almost looked like solid stars. “The photos and the video clips really do not do our planet justice. Going around earth every 90 minutes, it’s humbling from that point of view because you realize everyone I’ve ever known, every person who has ever lived, lived on that little rock. You feel more attached to humanity and to our little planet seeing it from God’s perspective,” said Bresnik.

“There are only a few of us on the space station, but it takes thousands of people to make our missions possible,” said Bresnik. “You could be a psychologist or a lawyer or an engineer or someone who makes and builds the rockets. Stay in school and get all the science and engineering education you can. We need you in our space program!”