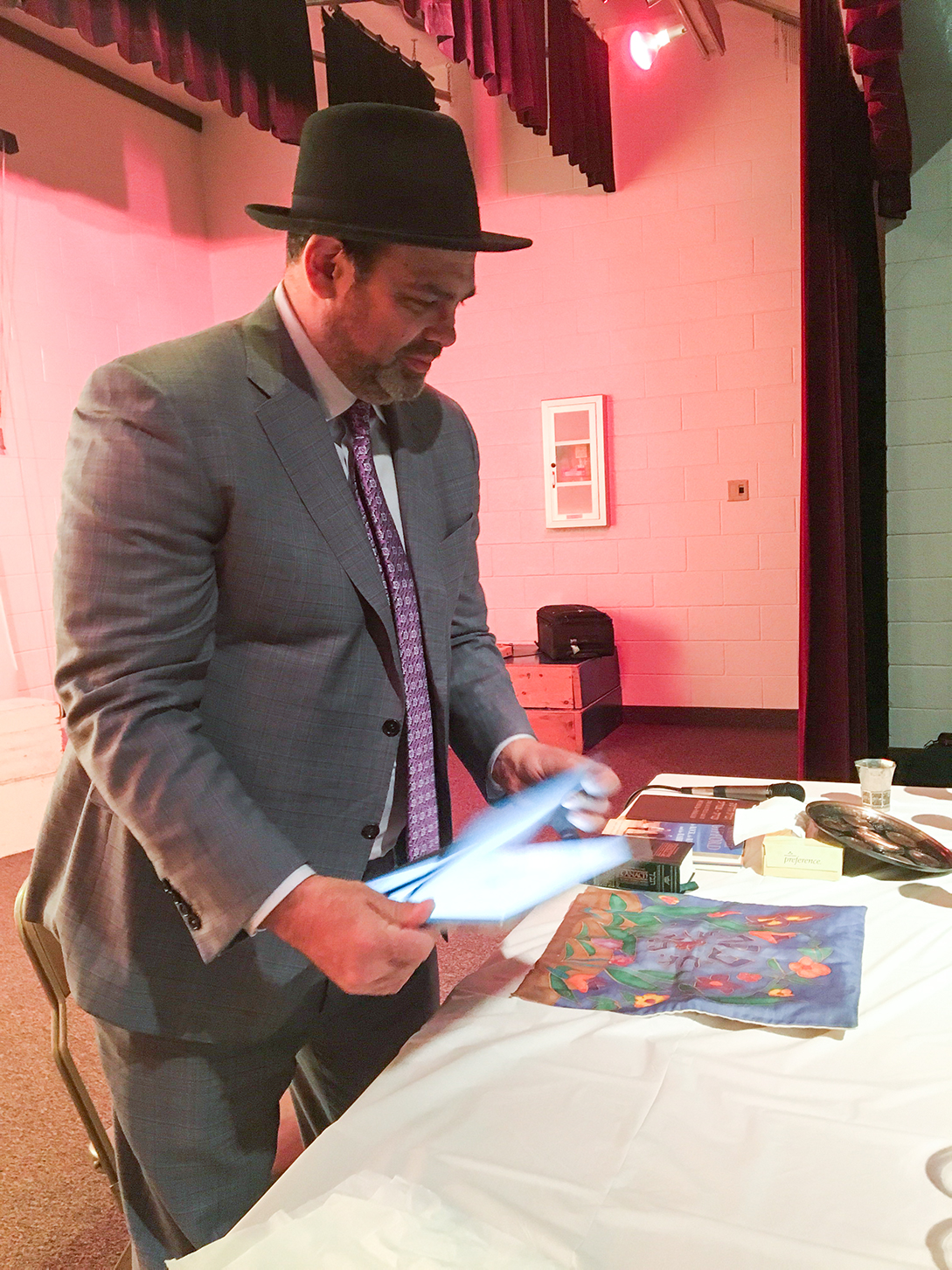 If you were passing the LDS church on 500 East in Lehi on Saturday night, you may have heard a loud “Let my People Go!” shouted by an enthusiastic congregation. Not to worry. Nationally known Messianic Rabbi, Jason Sobel was leading the mostly LDS crowd of over 200 attendees in a traditional Jewish Passover Seder.

The LDS cultural hall was transformed into an upscale dining room with tables adorned in fine china and silver. The Passover took over three hours from start to finish, which Sobel said was the “short version”. Attendees were treated to a traditional seder meal and were also pleased and surprised to learn of the many ties to Mormon doctrine and tradition that were revealed as Sobel explained the ancient Biblical tradition. Rabbi Jason was a charismatic, humble, and at times, funny host for the event.

Sobel is the leader of Fusion Global, a ministry focused on uniting Jews and Christians together as in the days of the early, first-century church. He recently co-wrote the New York Times best-selling inspirational Christian book with television personality Kathie Lee Gifford, “the Rock, the Road, and the Rabbi.”  There are less than 200,000 Messianic Jews in the world today. This small but rapidly-growing religious group accept Jesus Christ, (Yeshua), as the true Messiah, but also adhere to a traditional Jewish life, like the original Apostles.

Sobel spent time in Salt Lake City last weekend with local business leader and co-founder of VidAngel, Jeffrey Harmon. Sobel, who serves as Chief Biblical Consultant to VidAngel’s upcoming TV show, The Chosen, the very first multi-season series about the life of Christ, had the opportunity to tour Welfare Square and the Jordan River Temple open house, both of which profoundly impressed him, especially given the connections to Judaism and the Bible. Regarding the Bishops Storehouse and the quantity of goods, Sobel saw the Church of Jesus Christ of Latter-day Saints’ charitable works as “pure service to our brothers and sisters.”

The Lehi congregation of the Wines Park Ward enjoyed Sobel’s passion and talent as he explained each symbol and step in the Seder meal. The bitter herbs dipped in salt water represented the bitter suffering endured by the Jews at the hands of Egypt’s Pharaoh. The salt water represented the tears of the Hebrews and of Christ. Wine is usually consumed during the meal, but grape juice was sipped at four different times after Sobel chanted a Hebrew blessing before each sip.

Sobel provided an inspirational, yet fun monologue to keep the meal moving forward. He interspersed thoughts like, “God makes a way, when there seems no way,” and “Don’t settle for half your inheritance.”

One of the attendees, Jane Ann Thompson said, “I loved the whole thing. There are so many similarities in Mormon and Jewish tradition. I’m so glad I came.”

Jeffrey Harmon, who arranged the event with Sobel said, “I went on a life-changing tour of Israel with Rabbi Jason and it transformed the way I see the scriptures. The more I learned, the more I wanted him to come visit my congregation because I know he leaves everyone he meets with a stronger faith in the Savior. I firmly believe this is beginning of a long-overdue friendship between Messianic Jews and Mormons.”

At the Seder, attendees were invited to point out some of the many similarities between the Jewish and LDS faiths. Many people shouted out things like “a health code,” “strong family traditions,” “temples,” and “persecution.”

According to Sobel, “One of the things that struck me was the commonality and connection between Jews and Mormons. It’s so important to come together as Children of God and do good in the world. There is so much talk about our differences, it’s nice to come together and focus on our similarities and commonalities, and the potential to do good that all of us can accomplish.”

The meal was one that attendees will not soon forget. The feeling at the end of the evening was quiet and respectful as Rabbi Jason pronounced the traditional Aaronic blessing on the congregation. By connecting ancient Jewish traditions with new Christian interpretations, Sobel brought a spirit of love, kindness, and goodwill to an appreciative congregation.