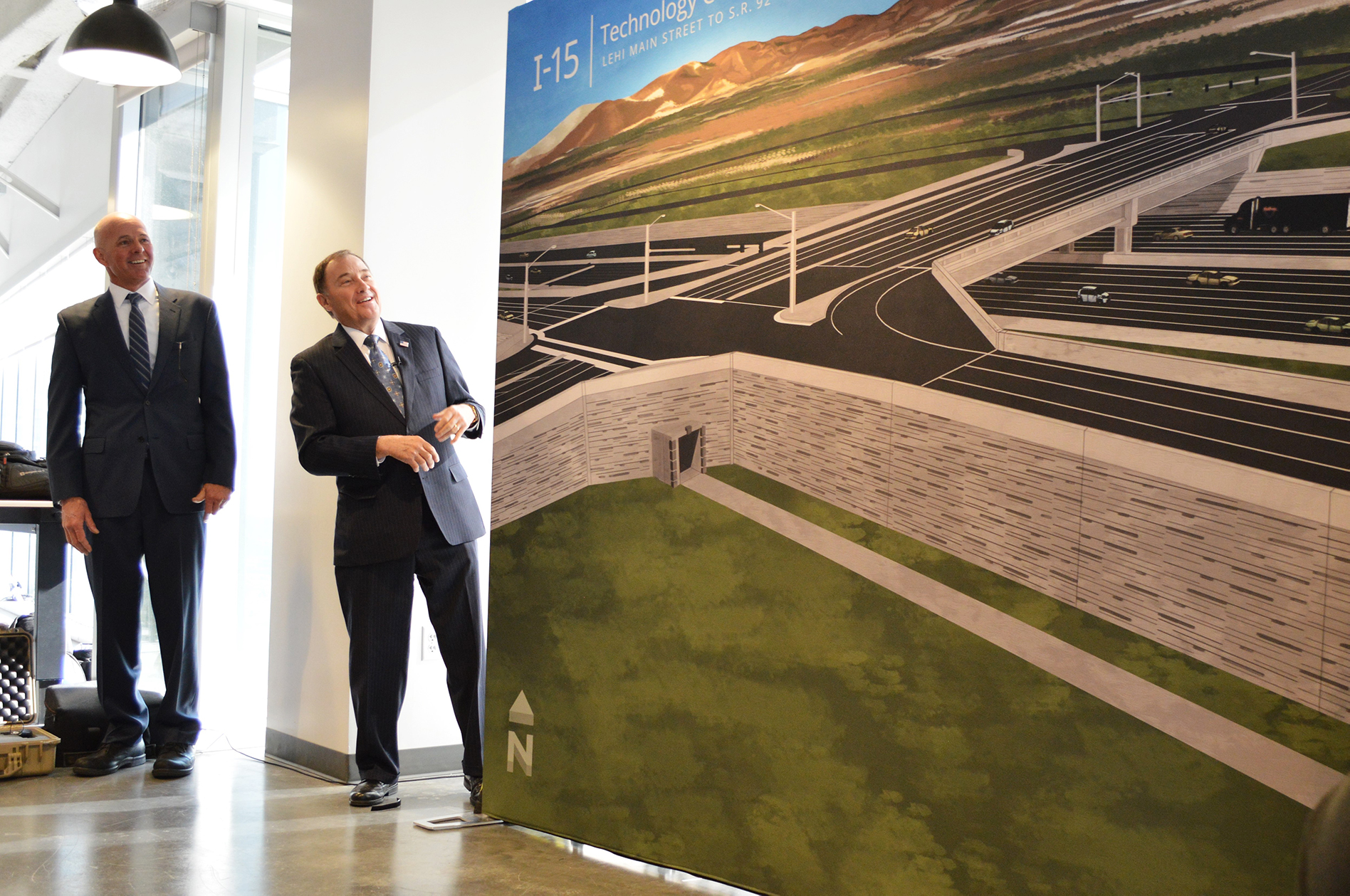 Governor Gary R. Herbert piloted a drone for a pre-construction site tour of the Technology Corridor on I-15 in Lehi, from the seventh-floor balcony of the UCCU Building on Digital Drive this morning, April 25. Utah Department of Transportation (UDOT) Executive Director, Carlos Braceras and Governor Herbert, revealed a large-scale artistic rendering of the Triumph Blvd Bridge as well.

“This is an exciting day for us, but I’m sure it’s even more exciting for those of you who live, work, and play in this area,” said Carlos Braceras. “This is the biggest project we have going on right now across the entire state. This is the last piece of a project we envisioned many years ago. The project is about $430 million total. It’s going to make the final connection between Salt Lake County and Utah County.”

Governor Herbert, who was born in American Fork, acknowledged the great changes that have taken place in Lehi since he was a boy and especially in the last 20 years. “Augmenting our roads and improving transportation is not just a matter of convenience for commuters. It’s also about economic development. We’ll have a hard time growing economically if we do not solve the problem of transportation,” said Herbert. “We want to accommodate the growth without diminishing the quality of life we have come to expect and appreciate here.”

Senator Stuart Adams spoke briefly about the challenge of finding money for projects of this size. Adams mentioned that the work completed on I-15 in time for the 2002 Winter Olympics was a big part of the economic boom that has taken place in Salt Lake County in the years since the Olympics. “We knew this project had to be done, but we were struggling with how to pay for it. It became more complicated when we looked at the inflationary rate and cost of construction materials getting higher and higher. That became discouraging,” explained Adams. Because Utah is in great economic shape, and previous bonds have been paid down, giving Utah a triple-A bonding rate, Utah can bond at a 3% inflationary rate, approximately 5% lower than the actual inflationary rate. Utah was able to bond for the Technology Corridor project and save the state money. “Bonding is not something we do very often in the currently conservative legislature. It took a lot of political capital to be able to support bonding. The legislature came together and thanks to the vision of our great governor, we were able to bond.”

Governor Herbert piloted a drone on the balcony at UCCU, while Bob Westover, UDOT Project Manager for the Technology Corridor, explained some of the features of the project. “Instead of four lanes, there will be five lanes along the construction area, during peak hours,” said Westover. Most of the heavy construction along the Technology Corridor will take place overnight. The Triumph Bridge that goes over I-15 near the movie theaters at Thanksgiving Point on the west side and Mountain Point Medical on the east side, will be completed by the end of 2018. The Triumph Bridge is not a freeway interchange, but an option for a “slip ramp” (a section of road that allows vehicles to enter or exit a controlled-access freeway) to get to the freeway.