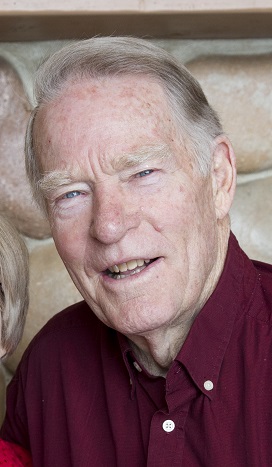 Phil Faulk
1937-2018
Philo (Phil) Arthur Faulk, 80, was born on June 26, 1937, and passed away April 15, 2018, at University of Utah Medical Center in Salt Lake City, Utah. Phil was born the third of six children to Kenneth Wayne Faulk and Grace Lilian Butler in Paonia, CO.
Phil graduated from Paonia High School where he excelled in wrestling, boxing, and football. Upon completing high school, he joined the U.S. Air Force and served for four years. While stationed at Barksdale Air Force Base in Louisiana, he met and began dating Dena Sue Irvin from Shreveport, and they were married on Feb 17th, 1961. They were later sealed in the Salt Lake Temple in 1964, and recently celebrated their 57th anniversary.
Phil worked as a heavy equipment operator and spent over ten years as an airplane flight mechanic at Hill Air Force Base before starting his own trucking company in 1974. Phil enjoyed self-employment until he retired in 2000. He was a faithful and devout member of the LDS church, and served in many callings during his life.
For several years after retirement, he continued driving truck for the LDS church as a special mission calling. Phil never met a stranger and had conversations with everyone he met. He was known for his charming personality, his great sense of humor, and the way he had fun and joked with those he loved most. His most enjoyable time was spent with family traveling, boating, camping, and driving his side by side (Rhino) ATV.
Phil is survived by his loving wife Sue and six children, Gwen (Cameron) Holman, Daryl (Toni) Faulk, Dena (Pete) Dastrup, Marci (Chance) Platt, Janet (Max) Harding, Sheleen (Brant) Westover, one sister, Bonnie Gudeman, 28 grandchildren, and three great grandchildren. Phil was preceded in death by his parents and four brothers.
Services will be held on Friday April 20th in the Lehi 8th Ward, located at 127 East 3200 North. A viewing will begin at 10 a.m. with services to follow at 12 p.m. Interment in Lehi City Cemetery.
Funeral Directors: Utah Valley Mortuary. Condolences may be expressed to the family at www.uvfuneral.com.