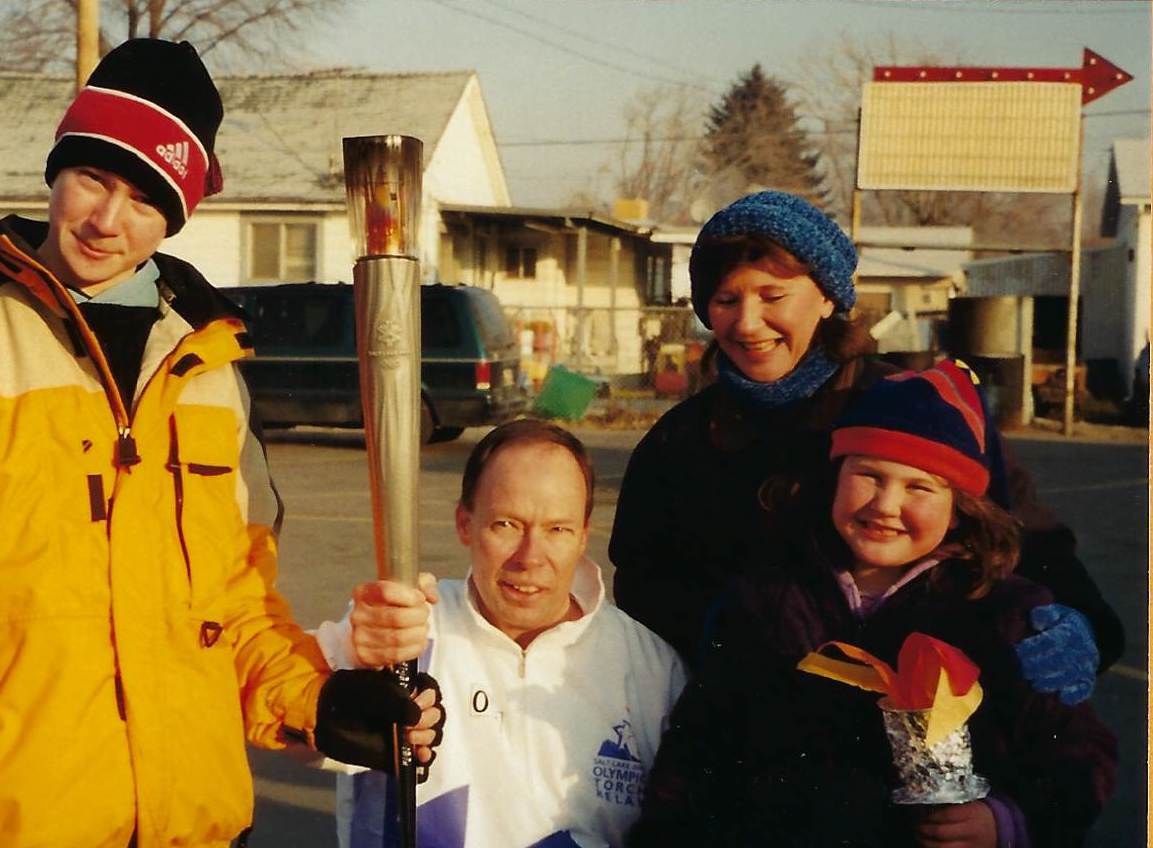 On the day of the 2018 Winter Olympics in Pyeongchang, South Korea, it’s fun to reflect on the day the 2002 Winter Olympics came to Lehi. The highlight was the Olympic Torch Relay on Feb. 6, 2002. Designed to share the Olympic spirit with as many people as possible, the relay surely did that in our city.

Hundreds of people braved the cold that morning to watch the only Olympic event to take place in Utah County. The torch began its journey at 6:45 a.m., at the Utah Valley Business Park in American Fork and made its way to Lehi where hundreds of people crowded the sidewalks of Main Street to get a view. That year 12,012 people were honored with the opportunity to carry the torch through 46 of the 50 states.

“I just remember standing in front of Hutch’s store, and it was really cold,” said Lehi native Robb Strong. “We all had Olympic fever. Not everyone gets to see the Olympic torch. We didn’t want to miss it.”

Lehi’s leg of the Torch Relay just happened to fall a day after Lehi marked 150 years since its incorporation, making it the sixth oldest municipality in Utah. Therefore, Lehi City pushed back its festivities for a day so that its events would coincide with the relay.

As a kickoff to the city’s celebration and the Olympic torch visit, Dallin Harris along with

As a kickoff to the city’s 150th birthday celebration and the Olympic torch visit, from left, local Boy Scout Troop 109 members Zach Porter, Dallan Harris, Blake Peterson and Christian Porter unveil the Olympic Torch Monument at the Legacy Center on the evening of Feb. 5, 2002. | Courtesy of Lynette Harris

members of Boy Scout Troop 109 unveiled Harris’ EagleScout project, the Olympic Torch Monument at the Legacy Center on the evening of Feb. 5, 2002. Also, a benefit dinner was held for the library, which raised $12,000, and a community dance with fireworks presented by the Lehi Fire Department completed the exciting day.

After the torch relay on Feb. 6, the new city library (which is the library today) was dedicated as well as Olympic Park, located at 2650 W. Parkside Drive. According to a February 13, 2002, Lehi Free Press article, it was, “the largest park ever constructed in Lehi.” It touted, “…three soccer fields, a volleyball area, a playground set and play area, a swing set area, a horseshoe site, basketball courts and a large gazebo that seats more than 200 people.” A large red, white, and blue American flag was also set in cement at the base of the Olympic Park Monument.

A commemorative Olympic pin was designed for the occasion to memorialize the city’s sesquicentennial, and city historian Richard Van Wagoner compiled a history called, Pioneering Lehi: A 150-Year Pictorial History. Also, Utah State Senator Howard A. Stephenson visited Lehi Junior High to present the school with an Olympic flag, and five Lehi High School Encore Choir students got to participate in the opening and closing ceremonies.

“[The five students] were asked to be audience leaders,” according to another Feb. 13, 2002, Lehi Free Press article. “Their responsibility was to coach and lead the audience in audience participation for the opening ceremony.” At the last minute, one was reassigned to escort the athletes onto the field.

At the time, one of the students, Amber Patterson, said, “It was way cool. I got to touch the Trade Center flag. I got to see the president of the United States walk by, Dixie Chicks, Le Ann Rimes, and Sting.”

Student Glenn Pearson reported having actresses Julia Roberts and Cameron Diaz in his section and getting to meet Sting and famous cellist Yoyo Ma.

Hundreds of people turned out to watch the 2002 Olympic Torch Relay make its way down Main Street on Feb. 6, 2002. | Courtesy of Lehi Historical Society and Archives

A new take on Macbeth at Skyridge Highschool