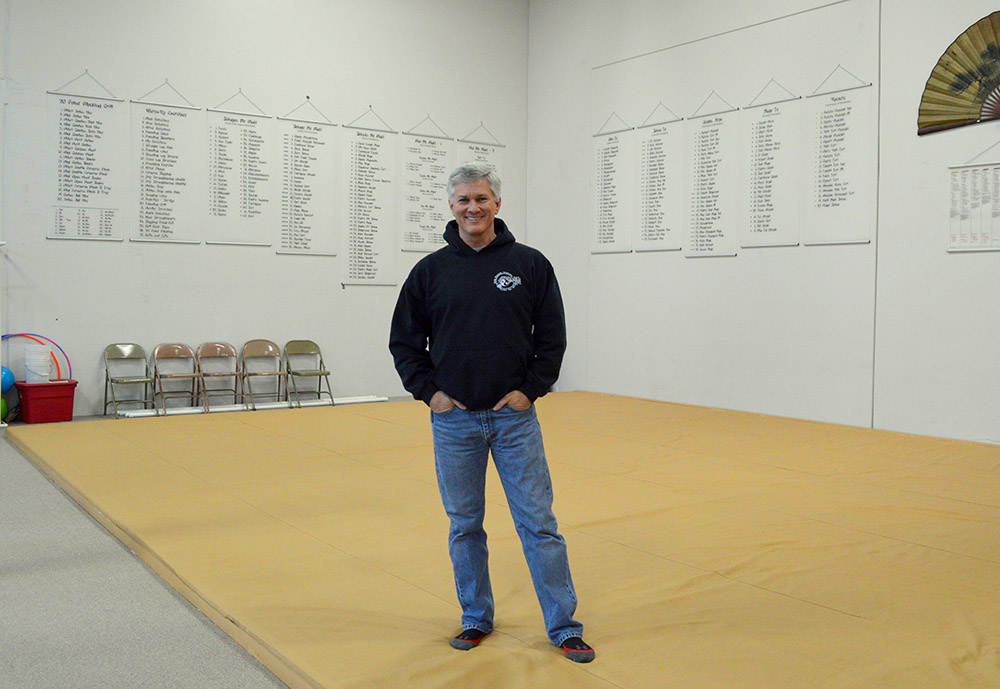 Bob Hodgkin has been doing jujitsu since 1982. The Shin Budo Kai dojo is filled with photos of Hodgkin and his partner with their instructors, as well as certificates of advancement they’ve achieved over the years. They even have their black belt lineage on the wall of one of the practice spaces. History and tradition is part of every dojo and it affects the uniqueness and style taught. “Our style of jujitsu focuses more on escaping and joint-locking and pressure points. We do punching and kicking too, but that isn’t as much our focus,” said Hodgkin. To advance to black belt, students need to master a list of holds and throws that are listed on banners on the walls of the dojo.

“For the kids, it’s about discipline and respect. Before they get on the mat, they must bow. Before they get off the mat, they bow. We’ll teach them ways to be efficient and get back on top. They need to have respect for their opponent and themselves. They need to work as a team with sportsmanship and respect,” said Hodgkin. “We don’t want them to be the attacker. If we hear that one of our students has been a bully at school they get one warning, then they’re out of the dojo.”

Shin Budo Kai teaches kids hand techniques to get out of holds, even if they’re being held by someone much bigger and stronger. “If you’re smaller, you can use your weight and momentum against them,” Hodgkin explained. Students can even put a bigger opponent in a hold with something as simple as a joint lock. “Once I create pain, I can control somebody,” said Hodgkin.

Another aim of the Shin Budo Kai Jujitsu is to teach students how to fall without getting injured. Each class includes 15 minutes of “rolls and falls.” Bob Hodgkin had been practicing jujitsu for about eight years when he slipped on the ice in his driveway while holding his three year-old daughter. “It was like slow motion. I tucked my chin and continued to hold my daughter as I fell and I was able to pop right back up without either of us getting injured.” Knowing how to fall is a great skill for football, soccer, and even basketball players and has helped prevent injuries for those players who also practice jujitsu.

The adult class at Shin Budo Kai is 50% women. Learning jujitsu has given the women students the confidence to be calm and patiently wait for the moment they can escape or use a joint-locking technique on her attacker. Shin Budo Kai also has a Women’s Self Defense class that is 10 lessons over a 12-week period. The women learn to calmly defend themselves against much bigger and stronger men.