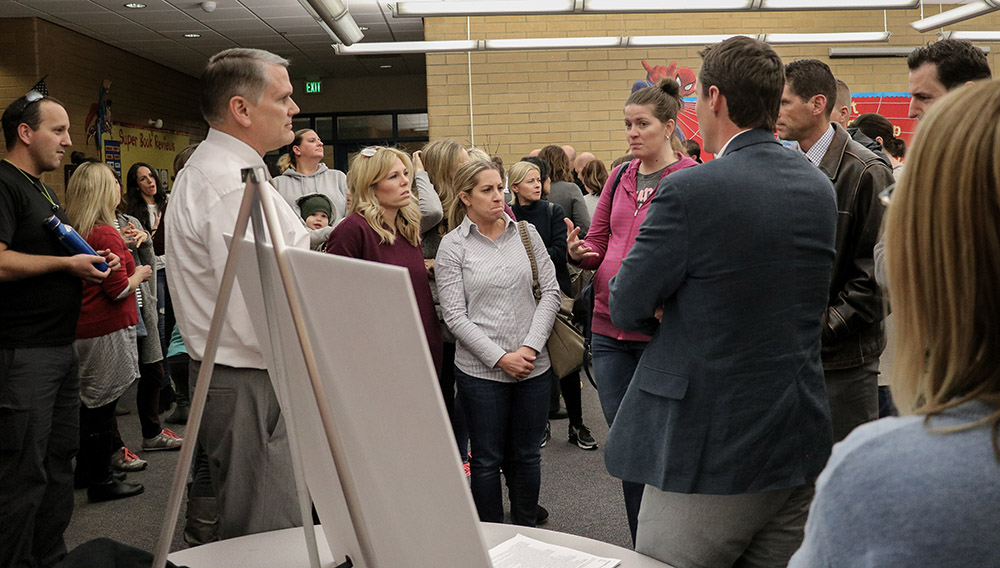 At Eaglecrest Elementary about 100 patrons met with Alpine School District personnel to give input regarding the two proposals presented at the informal open-house.

Eaglecrest Principal Rex Becker had some concerns with Option B. This option took about 150 students from Eaglecrest and moved them to Fox Hollow Elementary. With a total student body of 800 students, Becker said, “I will lose between 5 to 8 teachers along with some specialty teachers, classroom aides and lunchroom workers. We will also lose $25,000 in school trust lands money.”

Jill Broadbent, a parent of two children who attend Eaglecrest made an emotional appeal, “Just leave us alone. Neither proposal is good. We live in a mature neighborhood. We have lived here for ten years. We bought our home here because of Eaglecrest. We live 1.8 miles from Fox Hollow and will pass two schools, Eaglecrest and the new elementary to get to school. We live too close to be bussed and it is not safe to walk to school.”

It was apparent from comments by parents that many were not happy with the either proposal. Scott Carlson, Alpine District School Board member said, “The District has listened to the parents of Eaglecrest Elementary and will make decisions based on the comments heard.”

At another meeting about 125 parents met at Traverse Mountain Elementary to express their frustration with both proposals. When asked which proposal she preferred, Jennifer Ard expressed frustration with both, “I don’t like either proposal, but if I had to pick one it would be “B”. This option has a more balanced demographic.”

One parent complained, “The information given to us by the District was not accurate. The district is not getting projections right. They are not planning for growth in certain areas.” Brook Streadbeck expressed concern that the boundary committee had too many representatives from some neighborhoods and not enough from others.

Another parent said, “This is a lose-lose situation. It will divide this mountain. ‘Your kids don’t matter but mine do’ is the attitude.”

An almost weeping mother said, “Neighborhoods are fighting each other on Facebook.”

There were other concerns about bussing, traffic flow out of certain neighborhoods and the ability to keep schools staffed with the option that included four multiple housing/apartment units.

One parent, who is a teacher, expressed concern about the number of high density units in Proposal A. “No one would want to teach where there are so many families moving in and out. There will be teacher burnout. No one will want to stay.”

“People have been mean to each other,” was a concluding comment by a parent leaving the meeting.

Parents may access proposed boundary options online at the ASD website. According to ASD officials, all input is carefully considered. Boundary decisions will be made during the school board meeting on Tuesday, January 9th.