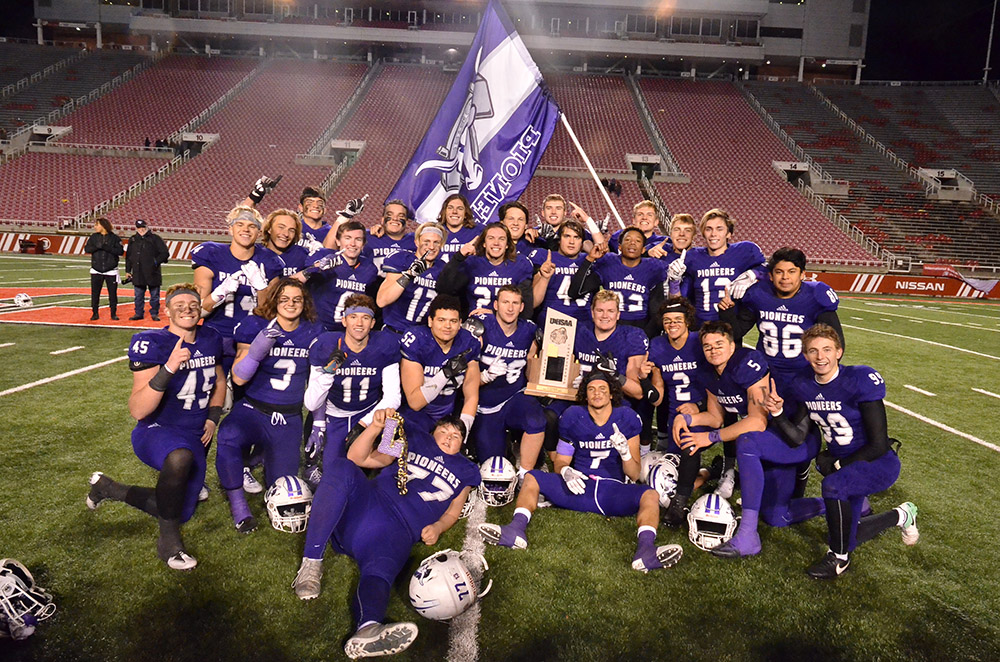 In a story line that seemed like it was drawn up in Hollywood writer’s office, the Lehi Pioneers and the Skyridge Falcons, both Lehi native high schools, faced off for the 5A state championship football game on Friday, November 17. It was the showdown the entire city had talked about, but no one thought would actually happen.

The weather was cold, and the Friday night lights were glowing at University of Utah’s Rice-Eccles Stadium as two Lehi teams took the field to fight over which part of the city would bring home the 5A state championship trophy.

The game started off with the ball in the hands of Cammon Cooper and the Pioneers. Heart’s skipped a beat when Cooper launched a ball down field and it was almost intercepted by a Skyridge defender. The first quarter proved to be nothing but a lot of back and forth between the Falcons and the Pioneers. It was clear to see the “jitters” had gotten to both teams with the excitement of playing in the state championship game. Skyridge finally had the ball, and looked like they were going to make a push to the Lehi end zone when a fumble gave possession back to the Pioneer offense. A painful mistake, because Cooper connected with Kade Moore for the first touchdown of the night. That TD ended the first quarter 7-0 in favor of the Pioneers.

Jayden Clemons, Baden Stambaugh, Nathan Upham, and the rest of the Skyridge team were determined to keep Skyridge in the game. Another fumble in the second half put the ball back in the hands of Cammon Cooper, who rushed for a 27-yard touchdown, putting the Pioneers on top by 14. Skyridge finally answered when Connor Harris punched in a field goal, making the score 14-3. The ball then went back and forth; Clemons found his go to receivers with Stambaugh and Samuels; Cooper found his main targets with Moore, Holker and Manookin. The Pioneers finally scored again when Cooper connected with Dallin Holker to further the gap. Lehi’s kicker, Jose Pizano was money all night with the PATs, putting Lehi on top 21-3 going into the half.

Lehi looked confident as they headed into the second half. Skyridge wasn’t carrying the swagger they were when they started the game. “We’ve always been a second half team” said one of the Falcon coaching staff as they jogged into the lockers to devise a plan to stop the Lehi offense, and to overcome the Lehi defense.

The start of the third quarter proved to be more of the same. A bobbled ball by Clemons resulted in a fumble recovered by Hayden Erickson giving Cooper the chance to connect another TD pass to Kyler Welsh, giving the Pioneers a 28-3 advantage. The pattern seemed to be on repeat. Another fumble by Skyridge recovered by Drake Knowles gave Dallin Holker a chance to haul in yet another touchdown pass. By the time the third quarter was done, Carson Manookin had rushed for a touchdown, Cooper had rushed for another, and Skyridge’s Eli Pulu had a 95-yard kick return making the score 41-10 going into the fourth quarter. Some of the orange-clad Skyridge fans started heading to portals, meanwhile the purple sea of Lehi fans got louder and louder with each passing second.

In the fourth quarter, Cooper found Kyler Welsh for a touchdown pass, and with Pizano’s PAT, the score was a lopsided 55-10 for the Pioneers. Now it was just a matter of drawing out the clock. Clemons connected a pass for one last touchdown, but by that time, the water had already drenched Coach Larson twice, and the Pioneers were already picturing what the rings were going to look like on their fingers.

With excellent defensive performances from Lincoln Bunker, who played with a broken thumb, Hayden Erickson, and the entire Lehi defense, they provided opportunities to give the ball to the Lehi offense to set up victory. When the clock hit zero, the Pioneers became the 2017 5A State Champions.

“We’ve had our highs, we’ve had our lows, but that’s what makes us a great team” said Coach Ed Larson after the game. “Our defense really helped us win more games than most people realize. They fought, and they gave us a chance to win each game we played.”

When asked if he really thought the Pioneers had a chance to take state, Dallin Holker responded, “Since the beginning of the season!”

Congratulations to Coach Larson and the Pioneers on an amazing season, and to Coach Lehman and the Falcons for an equally impressive performance, particularly as a second season team.  For the first time in many years, Lehi football has made an impressive mark on Utah high school football history, with two Lehi teams, one of which are now state champions.