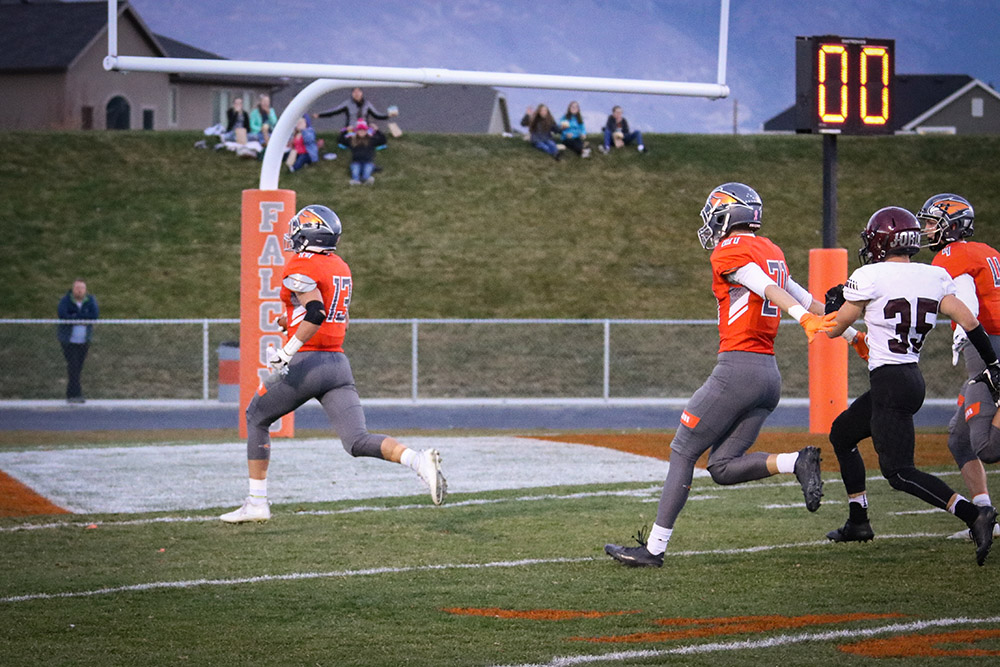 The Skyridge Falcons took the field against the stout-rostered Jordan Beetdiggers in the quarter finals last weekend in a contest to determine which team would move on to play at Rice-Eccles Stadium in the State Championship semi-finals.

Both teams took the field with what seemed to be a heightened sense of drive to move on in the playoffs. With the brisk Fall air and the cheering fans, it shaped up to be a great night for high school football.

The first quarter was a duel between the two heavyweights. They exchanged blows back and forth, not giving any ground. Jordan jumped out to a 10-0 lead, only to have Jayden Clemons connect a pass to Colby Samuels for a touchdown, bridging the score closer. Skyridge then scored again on a rushing touchdown from Alex Palmer, putting the Falcons on top 14-10. But Jordan didn’t stay quiet for long. A touchdown pass gave them the lead at 17-14. Bringing the first quarter to a close, and keeping the crowd thoroughly engaged.

Jordan opened the second quarter with a touchdown that furthered their lead, making it 24-14, but Skyridge answered back quickly when Baden Stambaugh hauled in a pass from Clemons to make it 24-21. After that the touchdowns just kept coming from both teams and the first half ended with at 30-28 lead for Jordan.

Jordan kicked off to a receiving Skyridge to open the second half, which lead to a touchdown, giving the Falcons the lead. A key play occurred when Jordan was marching down the field, and Falcon Blayden Togiai intercepted a pass. This pick dramatically shifted the momentum of the game.

Going into the fourth quarter, the score was 35-30 for the Falcons, and that’s when the fun began. A field goal and touch down increased the Skyridge score to 45 points, but Jordan didn’t stay quiet. They answered with a few touchdowns, and even recovered an onside kick, creating another scoring opportunity for the Beetdiggers.

After Jordan’s final touchdown, and with seconds left on the clock, the score was 45-43 score in favor of Skyridge. Jordan went to the goal line to attempt a two-point conversion. The ball was snapped, handed off, and stuffed by the Skyridge defense. A silent, anxious crowd, immediately went nuts with excitement! The time expired, and Skyridge walked away with the clutch win.

They now play on the turf of Rice-Eccles for the semi-finals against Corner Canyon today at 11 a.m.