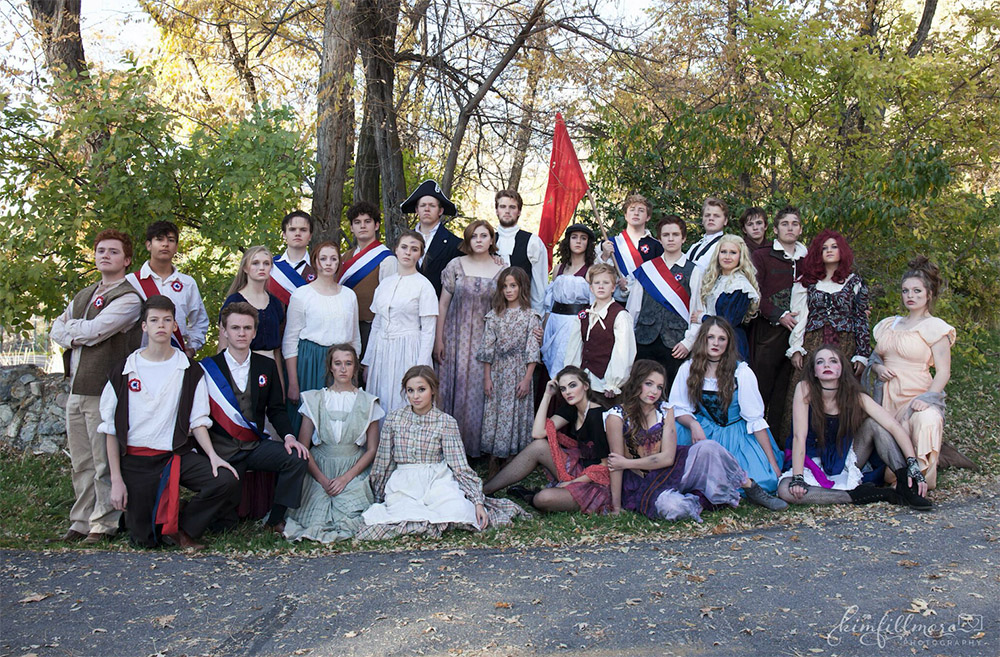 Skyridge High School students have known for months that the fall musical is Les Miserables. After weeks of rehearsals, the show will finally start on Thursday, November 9 and run until Saturday, November 18.

The characters and subject matter of Les Miserables is pretty heavy for high school-age actors to pull off, but the students in the show are up for it. Cole Brown has wanted to play Jean Valjean since he was ten years old. The clean-cut Brown started growing a beard soon after getting the part of Valjean. “I feel a connection with Valjean because he turns from a life of misery and strife and becomes a blessing to, well, everyone in the show. His story is an example of what I hope to one day see in myself. Whenever I hear/perform Les Miserables it serves as a reminder,” said Cole Brown. Musical Director Lauren Allen was pleasantly surprised that she didn’t have to teach Brown any of Jean Valjean’s songs.

“It’s hard to put myself in Fantine’s shoes – she goes through so much. I’m just a high schooler!” said Sydney Cooper, who plays Fantine in Skyridge’s production. Cooper wants to strike a balance between sounding beautiful while still feeling Fantine’s vulnerability and emotions. Sydney even cut off her long hair at director John Brown’s suggestion.

The cast of Skyridge’s Les Miserables came in with a high level of knowledge about the music and the story. Lauren Allen was able to get right to polishing songs and teaching harmonies on each of the numbers. Allen, John Brown, and Assistant Director/Choreographer Melissa Higley have implemented all that they learned from their first year doing a big musical at Skyridge. “I feel like our pacing is much better this year. We started way earlier with auditions and we’ve structured rehearsals better this time.”

The students participating in Les Miserables come from every department at the school. John Brown was adamant that there be overlap among the programs at Skyridge, involving as many students as possible in the production. The cast includes students on the football team, student council, choir, and even the school mascot. It’s not just Skyridge students who are excited about the show. “The amount of support from the other schools is amazing,” said Lauren Allen. “I think Les Mis is a timely show. It’s full of unity and power and it’s cathartic in this divisive climate we’re in now – I can see why multiple directors have chosen to do it.” American Fork High School is also doing Les Miserables during the same weeks as the Skyridge production.

“The seniors in the show have jobs and college applications and the ACT. This is something that I know I’m going to look back on with happiness – I’m going to be glad I did it. I go throughout the day thinking ‘math class sucks, but I have rehearsal today!’ I just love it so much!” explained Sydney Cooper. Parents of cast members have also cheerfully put in a lot of hours helping with costumes, photos, and in Kim Fillmore’s case, individual musical coaching. Fillmore’s daughter, Paisley, plays one of the little Cosette’s. Paisley looks forward to rehearsals, even at the end of a long school day.

Buy tickets for Skyridge’s Les Miserables online at www.showtix4u.com or at the door the night of the show.