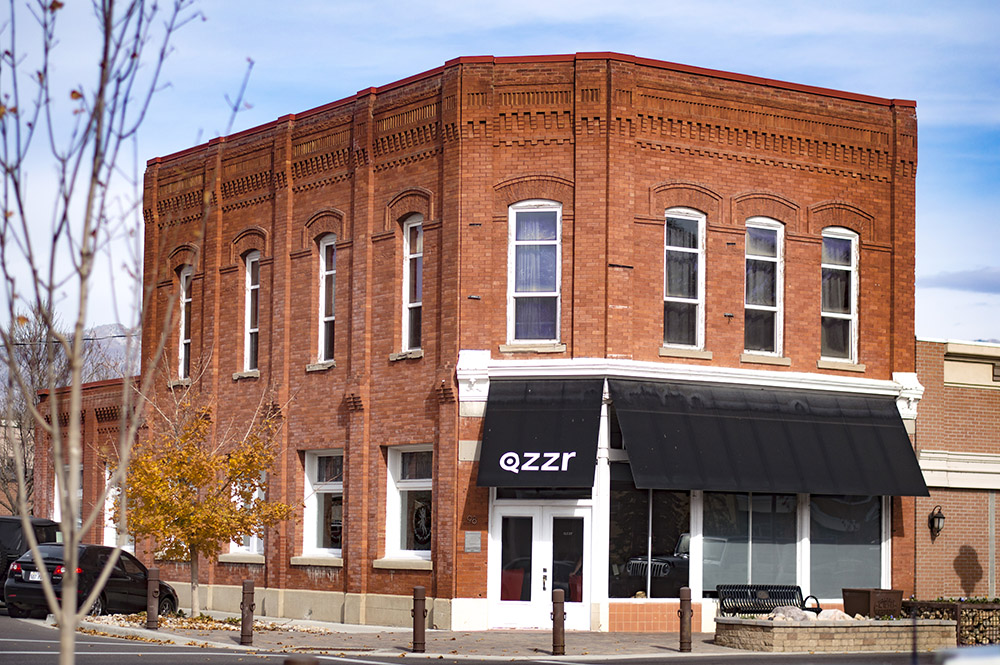 Steeped in Lehi history, the Merrihew/Dalley Building has an eclectic past to say the least.

Located at 98 West Main, the structure currently houses QZZR, a quiz software company, which employs 10. “It was so fun to see the hidden gems, like the brick wall when they removed the plaster in 2012,” said Conner Child, QZZR’s Customer Development Specialist. “Whoever built the building knew what they were doing. I’m glad it’s looking like it should.”

The building got its start in 1900 when Harry Bert Merrihew, a graduate of the Highland Park College of Pharmacy in Iowa, came to town and became the second in what would become a long line of Lehi Drug Store owners. He had the two-story, brick, “Merrihew Building,” constructed to accommodate his apothecary, which he had purchased just three years earlier and had operated at 150 West Main.

By 1901, Merrihew had turned the upstairs of the building into a lodge room for the, “Odd Fellows,” and “Modern Woodmen of the World,” fraternal orders. According to Historic Lehi—Where the American West Still Is, “The hottest-selling items on a druggist’s shelves were patent medicines, which—if labels are to be believed—could handle any and every ailment. … ‘Karl’s Clover Root’ for example, ‘will purify your complexion, regulate your bowels and make your head clear as a bell.’

“The makers of ‘DeWitt’s Witch Hazel Salve,’ went so far as to claim the product could heal, ‘everything but a broken heart.’”

This picture ran with an announcement of Julian’s Drugs grand opening in The Lehi Free Press on Mar. 25, 1954. Lake City. | Courtesy of Lehi Historical and Archives

A Guide to Lehi City’s Historical Sites and Places notes, “The Lehi Drug Store had the finest soda fountain in the city’s history.” The intricately carved walnut cabinet with a large arched mirror and marble countertop stored its soda glasses and can be seen at the John Hutchings Museum.

In September of 1917, Merrihew sold his store to John Franklin Bradshaw and his brother-in-law, Gerald R. Taylor, who ran the store for another two years at that location before trading the building to the State Bank of Lehi, which then moved two doors west into the Merrihew Building. In 1930, the bank added an addition to the north side of the building to accommodate continuous growth.

When the bank moved to a new location in 1953, local pharmacist and World War II veteran Paul Julian purchased the building and moved his business, Julian’s Drugs, into the building from 35 West Main. Julian turned the upstairs into a home for his family and the main door to the building was moved from the south side of the building to the southwest corner where it remains today. A window was cut from the old bank vault to provide a prescription alcove.

Of its grand opening, a Lehi Free Press article dated Mar. 25, 1954, reads, “Mr. Julian reports that the first 72 ladies to visit the store Saturday will receive free boxes of Kleenex. All during the day there will be free ice cream cones, free fountain Coca-Cola and free bubble gum for the kids.”

In 1964, Julian’s Drug went out of business, and Leonard and Twila Rockwell purchased the property. They moved into the upstairs apartment, and the downstairs area temporarily housed the Lehi Post Office. When the post office moved out, Jo’s Fashions took its place.

In 1973, Lehi residents Wesley and Geraldine Dalley purchased the building and still own it today. From 1973 to 1982, they ran Dalley Jewelry. But in 1982, when they were able to get their building listed on the National Register of Historic Places, they closed down for a time to rennovate. They had the white paint removed from the exterior walls and windows, removed the false ceiling to reveal the beautiful old pressed-in ceiling and had windows with cherubs etched into the glass installed just below the original leaded windows they left in place.

“We’ve really loved that building,” said Geraldine Dalley. “We’ve tried to do right by it.”

After the restoration was complete, they reopened as Geraldine’s, still selling jewelry. Over the years, they also had within their store a gift shop, a pet fish business, sold Madame Alexander dolls and even retailed grandfather clocks for a time.

Except for a short stint between 2009-2010, in which the Dalley’s reopened their jewelry store, they’ve leased their building out since 2005. For a time, it was a piano store, CK Jewelers, a book store and a dentist even spent significant time fixing up the place before deciding not to set up shop there.

Since 2010, a series of successful software and marketing companies have occupied the building, including Bloomfire, Fit Marketing, which painted, put in new floors and removed the plaster from the brick wall on the east side of the building, and finally QZZR, which moved in the summer of 2015 from an office space just next door to the east.

“It’s a great location,” said Child. “I’m so glad to get to work in Lehi but not be at Thanksgiving Point amidst the traffic madness.”