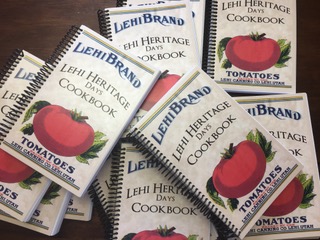 Everyone who wants a cookbook can have a cookbook.

Under the direction of John Haws and with the help of Linda Smith and her daughters, Kendra Tate and Jody Ralphs, it took two years to gather and prepare the more than 300 recipes that make up the cookbook, which features famous Lehi recipes like the “Chicken on a Bun,” recipe, which was sold at Goodwin’s Lehi Café.

Smith said, “John was working on a cookbook, and I ended up proofreading and adding in recipes he wanted to help get it finished.” As Haws’ health deteriorated, the project, including all formatting, eventually became Smith’s. “I hope it is what he wanted,” said Smith. “That was my goal.”

“Many who contributed recipes from their ancestors also included stories,” said Bangerter. “For example, a recipe submitted by Lehi resident Kim Holmes includes a darling story. It reads, ‘Genavieve Otterson Holmes … walked to the new West School each day except when the snow was too deep, then her dad (Nels Otterson) would put her brother, Bud, her sister, Elsie, and her on his horse, head it toward town and pat its rump … after the horse got to the place where they cleaned the walks (about where the roundabout is now on Main Street), the kids would slide down the horse’s front leg, turn him around, and send him back home.’”

All proceeds from the sale of the cookbooks benefit the Archives, which strives to collect, preserve, protect and promote the history of Lehi and its people.

Chick-fil-A opens to camped out crowds