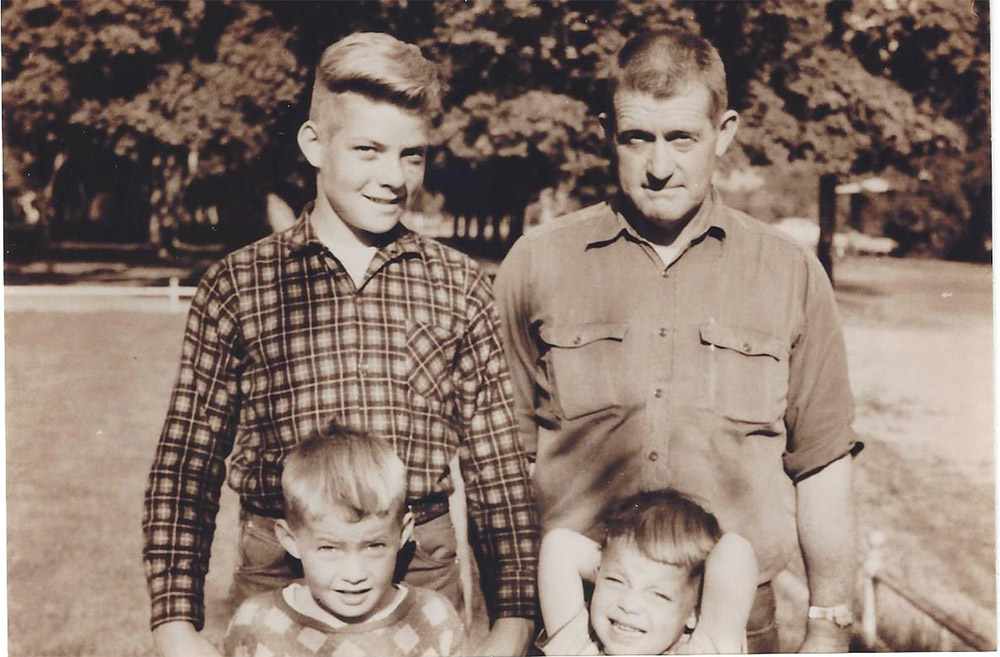 It was 5:00 a.m. New Year’s morning 1959. There was a howling blizzard freezing the darkness. Blinding snowflakes prevented me from being able to see more than thirty feet ahead of me as I powered my new Schwinn through a foot of the heavy snow to pick up my paper bundle. Mom had heard me get up. She cooked me scrambled eggs and toast. The tasty breakfast and warmth of my home near Wines Park faded quickly as I pedaled two miles to pick up my bundle of The Daily Herald newspapers for the huge holiday edition delivery on New Year’s Day.

When I arrived at the home of Paul Willis, my delivery manager, Johnny Gray was already there. I saw his bike standing near the Willis car, but he was nowhere in sight. “Hey, come crawl under here with me and get warm,” he said. Johnny’s voice came from under the car where there were faint snowy tire-tracks in the concrete driveway. I hopped off my bike and slid under the car with him. He was holding his gloved hands on the muffler to keep them warm. “Willis came in about an hour ago and the bundles are under the carport,” John said. “But his car is still warm and I need to thaw-out my fingers.” Both John and I whispered and shivered for about fifteen minutes then wiggled out from under the car and started stuffing advertisement inserts into every copy, rolled them up, wrapped elastics around each one, then filled our canvas bags with the weighty editions before heading back into the swirling darkness.

We wouldn’t be able to throw them up the sidewalks on that morning. Each one would have to be inserted into the paper box or inside the screen doors of each house to keep them from getting wet and soggy. The darkness between streetlights was compounded by the snow and I heard Johnny’s faint yell through the howl of the blizzard: “Don’t freeze to death!” My first delivery was Bert Beck’s house on 100 North, then Wally Smith, Inez Peterson and over to the Broadbent house on the corner then across to Urry’s.

I continued up Center Street to Hugh Otterstroms, Gus Larsen’s and over to the Lewis home, up to Chruma’s then across to Well’s, up to Ralph’s, Cox’s, Harold Osborn’s, then over to Mrs. Crabb, Wanlass’s, Boltz’s Holbrook’s, Doug Smith’s, Loveridge’s, around to MacNaughton’s, Peterson’s, Hoover’s, Worlton’s, Price’s, Bird’s, Webb’s, Hardman’s, and on to Grandma Fowler’s, Paul’s, McDermott’s,  Morton’s (who always paid me with silver dollars), then across to Christensen’s, Ralph Roberts’, Glover’s then Hall’s, Blamires’, Logsden’s, Giles’, Ruel Evans’, Scow’s, Proctor’s, Gudmundsen’s, Wilkin’s, Kirkham’s, Quintana’s, Gurney’s,  Dick Evans’, then down to Richard Eddington’s and Bray’s, then back up to Austin’s, Mrs. Keeler’s, Mrs. Dunston’s, Harding’s, Strasburg’s, George Peterson’s and down to Dale Price’s, John Whimpey’s, Tom Kirkham’s, Sly’s, Racker’s, Losee’s, Trane’s and Carma Colledge’s.

My route took me through the middle of town where I often had to get off my bike that snowy morning and push it through drifts too deep to pedal. At the Lehi Drive Inn on State Street, I parked my bike, brushed snow off my clothes and entered the café, putting their paper on the counter. “Here is a cup of hot chocolate,” Mrs. Goodwin offered. “You look frozen, and it’s free,” she said. I was in love with her immediately and have been since that day. I sat at the counter and sipped until it started to get gray in the eastern sky. A few regulars came in for a cup of coffee and some breakfast eggs or pancakes. I loved seeing them read the paper and offer a word of thanks to me for the holiday delivery.

I continued across State Street (highway 91) up Locust Lane to the Jones house, Hunger’s, Ashtons, and around to Calton’s before heading west down State Street to Wilson’s, Fred Turner’s then back to Cliff Miller’s, Jackson’s, Udell’s, Barnhart’s and around the corner to Mrs. Ivers’, Howard Brown’s, the Roy Davis home, Doc Larsen’s, Forestier’s, Cooper’s, Shaw’s, the Ralph Davis home… and I was done.

When I collected each month from Tom Kirkham, he always said, “Billy… here’s your money for me and my sister Eliza (Crabb). You earn every penny my boy and know the value of hard work and earning money. Paper boys always grow up to be good citizens and never go to jail.”  So far, so good!

You Better Believe It: Fall brings memories of preparation for the winter

Susan Says: Surviving back to school anxiety and stress