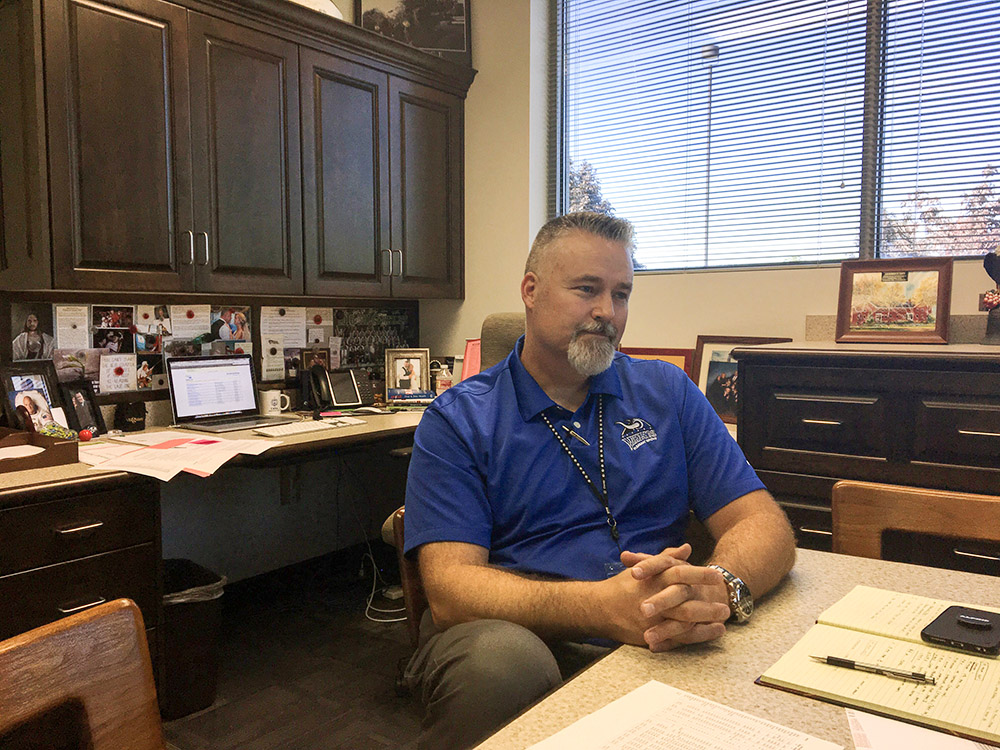 With school beginning, citizens are concerned about how Alpine School District can address the problems associated with the growth in the area. On August 24th, Lehi Free Press interviewed ASD Assistant Superintendent, Rob Smith, to gain insight into what is being done by the district to help students have outstanding educational experiences.

LFP: What is the most critical issue facing ASD?

RS: The most pressing financial issue that we face, and there are many, is how do we respond to growth? How do we build? How do we build right? How do we build in the right area and do it with our taxpayers in mind, the fiduciary responsibility we have to families and businesses. I think, that’s probably, the number one issue I see right now as we’re developing capital plans and determining what is most needed.

LFP: You mean specifically regarding just physically having enough schools?

LFP: In the right places?

RS: Space that is conducive to learning and engages families as a walkable, community gathering place. That, I think, is our biggest challenge. Right on the heels of that is our charge, our responsibility to recruit, retain and compensate great teachers who will facilitate high levels of learning for our kids and their families and our businesses.

LFP: What about the issue of attracting and retaining teachers?

RS: It is hard to say which is the most pressing right now because of the capital concerns with rising property prices and constructions costs. I am having a hard time securing property in the right places. The reality is, something I am very concerned about is that we have schools that are walkable, decrease congestion, improve safety for students coming to and from school, that are really an asset in the community, a gathering place, not just for learning but for recreation, for engagement.

LFP: Do you find that is a challenge because you are not involved in the planning process early enough in these brand new, burgeoning neighborhoods?

LFP: What can you do as Assistant Superintendent of Alpine School District to effect that with the legislature?

RS: I am working constantly with the legislators and community members on this issue.  I developed an impact fee proposal several years ago and have presented it to Legislative subcommittees, individual legislators and to parents at cottage meetings in our neighborhoods. We are working hard to change the conversation on infrastructure and why schools should be viewed as infrastructure. So far, we haven’t been able to change the conversation, but we continue to work on it.

LFP: Is the problem because of the makeup of our legislature?

RS: The composition has an impact on this issue and the competing pressures legislators face from different groups like the Realtor’s lobby, Homebuilders Association, League of Cities and Towns and others.

LFP: Let’s turn the conversation to the second issue, recruiting and retaining quality teachers. It is anticipated that 30-40% of teacher in Alpine School District may be retiring in the next four to five years. How can they be replaced?

RS: I have a report from all the school districts in the state. This is reporting from the school districts. There’s sometimes a difference in how districts report salaries from a single lane salary schedule which is like Canyons to ours which includes steps, super steps. When we start looking at other districts and we start saying why did they do this and they not do this, because of the individual issues that districts and boards of education make creates some of those differences. Some of them cannot accurately be reflected in a question and answer sheet that’s sent out to all districts to try to have some uniformity. If some district is increasing deductibles on their health insurance or they are decreasing their contribution and making the employees pay a higher deductible it doesn’t show up on a salary schedule.

RS: We need to be vigilant in comparing apples to apples…because every district is different.

LFP: I know a beginning teacher can start at about $45,000 in certain circumstances.

RS: We have been working on that for many years.

LFP: A worry is that teachers in the middle, in the fifth, sixth, or seventh year haven’t seen much increase.

RS: And that’s why we have, ASD working with our Teacher’s Association, kept our steps that give greater increases for those teachers than they do in the first three of four years.

RS: I would say that is not necessarily true. I recently taught a course at our new teacher orientation for the first time and this is my 16th year at Alpine and was pleasantly surprised at the maturity of teachers. They weren’t all just young first-year teachers. We brought in a lot of teachers from other districts, and it surprised me a little bit. So, when you look at competitiveness, I think Alpine has been very competitive, both at the starting salary and that’s is because of productivity. * (see editor’s note)

LFP: So you do not see a problem with teacher shortage?

RS: There are always a need for psychologists, special education teachers, and speech pathologists and that’s because, frankly, the universities are not  preparing enough graduates. For example, in one university, there were only 12 psychologist graduates last year.

RS: I would say yes. From my perspective, I worked for several years on the Lieutenant Governor’s Task Force which was organized to look at education priorities and their possible funding sources. One of those things that we had worked on was beginning teacher’s salary, with a recommendation to increase this amount to $40,000 per year throughout Utah

LFP: Are we not there with Alpine?

RS: Yes, for all teachers teaching at a productivity school or on a productivity model.  For traditional elementary school teachers, who teach a shorter day and fewer student in general, we are not quite there.

LFP: Why is it that in many places in Utah there is a teacher shortage?

LFP: Why do you think, money aside, going into education is not an enticing option.

RS: When I was asked by Governor Leavitt, I’ve been asked by Governor Herbert, and by Governor Huntsman, what’s the one thing we could do, from your perspective to improve education because teaching builds every profession. We must change the conversation about the profession to something positive. It is to say, we value those who value human life and the growth and development of others. We should value it even more so in how we speak and how we engage in conversations about educators and then we should compensate them fairly. If we value it, we will pay for it, if we don’t value it, we will not pay for it.

*A productivity model was adopted by Alpine School District in the early 80’s. Teachers were paid more who taught longer hours, longer years, and more students.

* Productivity was negotiated in the late 1970’s and early 1980’s to provide additional compensation for teachers who worked a longer day, more days in the year and took more students in their classrooms.